The 2010-2011 draws to a close, but we’ll always have the memories…of graceful people doing elegant things while the rest of us clomp around with looks of admiration on our faces. JK, guys, they are totally polite about that.

It is with great sadness that I conclude my love affair with the Richmond Ballet’s Studio Series. Unless they let me come back next year, that is.

If you haven’t seen one of their studio performances yet, I encourage each one of you to waste no time in correcting that unfortunate situation. But if you can’t raise thirty bones by this weekend, start saving now for what sounds like a bangin’ season next year. My someday-BFF Stoner Winslett practically danced around with glee when she announced the four studio performances to which we can look forward beginning in the fall. The specific pieces escape me, as I of course couldn’t find my pen (I swear I had no wine to drink this time around), but I know that everyone around me, all of whom know 1000% more about this stuff than I do, kept gasping in delight as Ballanchine and some other dudes rolled comfortably off Winslett’s tongue. Oh, and the 2012 Studio Four (I do remember that one, Agnes de Mille’s Rodeo*) will require a set SO INTENSE that the whole thing has to be moved to CenterStage.

Intense ballet! I am in!

This time around, we’ve got Jessica Lang’s Women and the Sea, which has probably been the most accessible studio performance I’ve seen yet. Lang based her moody piece on the paintings of Will Barnet, which depict various women staring out at the sea with striking nuance of feeling. I wasn’t familiar with the artwork, but it was clear from the reproductions in the program that Tamara Cobus and MK Stewart went to great lengths to keep the costuming and set design accurate so as to preserve the exact mood. Luckily, music by the brilliant Henryk Górecki provided the missing piece, which Lang says she happened upon within fifteen minutes of searching. Its doleful, clanging bells bring the menfolk home and then shoo them away with unfeeling regularity, as we watch the women adapt in various ways, eventually resuming their seaside posts. 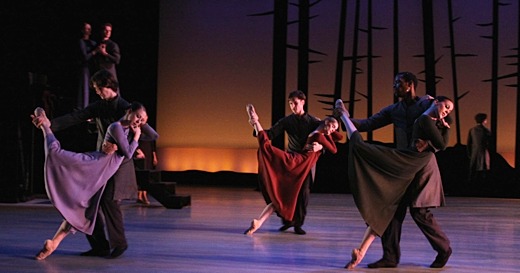 Maggie Smalls, as the shawled character from Barnet’s Dawn (1975) was touching in her grief, and Lauren Fagone’s brooding figure from Stairway to the Sea (1984) was nothing short of stunning. I’m always so impressed at how these technical marvels manage to be evocative actors at the same time, and as was evident in Studio Two’s Adam and Eve and Studio Three’s Octavo, the company knows how to pull you in and grip your heart with their freakishly strong hands.

After such a range of emotions, the world premiere of Val Caniparoli’s Swipe was a bit of a relief. As Caniparoli insists, his piece is simply about letting the dancers have fun. Clad in jean-like pants and simple leotards (unbuttoned striped shirts for the dudes), the dancers bounded around with big grins on their faces. I had been so convinced that they were all really upset about whatever their husbands were doing out at sea in the last act that the contrast was all the more entertaining.

“I guess we’re all always trying to do something that someone else hasn’t already done,” said Caniparoli, who used for this piece the music of Gabriel Prokofiev, grandson of THE Prokofiev. Like the composer, who dabbles heavily in hip-hop and dance music, Caniparoli hails from a dancing background that incorporates lots of influences…”sort of a mutt,” he says. As a result, the dancing, like the music, has shades of contemporary dancing-for-fun with traditional, classical style always threatening to break through. Did I mention these jean-clad ladies were en pointe? It’s a super neat juxtaposition that allows the dancers to run the gamut of new and old technique, all while looking like they are having the time of their lives. The entire ensemble was magnetic, but I felt the audience was especially enraptured with Valerie Tellmann and the mischievous look she has down pat, Fernando Sabino’s athleticism, and a playful Cecile Tuzii, who typically does serious so well.

What I don’t see when I attend these performances is a solid audience representation by the younger set. The mildly pricey tickets may be the issue, although I do see some younger folks at the hella-expensive opera, but I suspect it has something more to do with a suspicion that the ballet is an uncrackable code. Guys, I know as little about the technique of dancing at the conclusion of this season as I ever did, but I can promise you that it’s a supremely accessible art form for everyone with feelings. Even deeply buried, grouchy ones.**

Studio Four runs through Sunday, May 8, and it would be a fabulous and memorable Mother’s Day present. Buy tickets at ticketmaster.com or stop by the box office at 407 East Canal Street. For more information, visit richmondballet.com.

* Or if you’re classically inclined, like myself, you know it as Aaron Copland’s Rodeo, or, if you’re a scholar of 1990s television commercials, you’ll turn up your nose at all this fancy talk and refer to it simply as, “Beef, It’s What’s for Dinner.”