On the heels of Leap Week, the Richmond Ballet capitalizes on the momentum surrounding local dance with a program dedicated to promoting up-and-coming choreographers. Handpicked by artistic director and supernaturally elegant human Stoner Winslett, four choreographers are given one month to concept, choreograph, and rehearse an entirely new dance.

One month may not sound like a challenge, and indeed, many visiting choreographers only have a couple of weeks to teach and fine-tune their dance. But the differences are significant: these choreographers couldn’t begin their creative process until after they arrived. Amy Seiwert, Sasha Janes, Darrell Grand Moultrie, and Richmond’s own Starrene Foster used their allotted 50 rehearsal hours well, turning over a program that ranges from somber to jubilant, while showcasing the formidable skills of RB’s professional company as well as Richmond Ballet II. The audience, for the price of admission, is treated to a glimpse of something absolutely no one else has ever seen. Though these pieces may eventually becomes parts of larger works, their official world premiere is with Richmond Ballet, this month, this year. Boom.

The Edge of Place – Amy Seiwert

Inspired by the music of Icelandic celloist Hildur Gudnadottir, San Franciscoan Amy Seiwert created a moody yet un-heavy piece for RB favorites Lauren Fagone, Thomas Ragland, Shira Lanyi, Ariel Rose, Valerie Tellmann, and Fernando Sabino. Fagone and Rose were captivating from the very start. “Those who have been coming to the ballet for a long time know that I like things to have a lot of drama,” said Fagone in the post-production Q&A. And it’s true, she does shine when representing turbulent emotions, but it turns out that in plain shoes, she’s kind of a ham? From one ham to another, Lauren, I salute you.

Sasha Janes hails from Australia via Charlotte, North Carolina, where he serves as assistant artistic director of the North Carolina Ballet Theatre. My favorite of the four, his piece was flirtatious, expressive, and fun, with Maggie Small and Trevor Davis—possibly the two most magnetic company members in roles that require a lot of acting—as central figures. Cecile Tuzii danced out of retirement for this one, to everyone’s delight. I, too, enjoy the dramatic ones normally, but I found this jewel-toned beauty addicting and over too soon.

VCU and Richmond Ballet faculty member Starrene Foster began her idea with a vision of grey dresses, striped pants, and music by English composer Gavin Bryars. Gavin Bryars’s music carried her six dancers through an expression of…a feeling I couldn’t quite pinpoint, but I enjoyed the way she used the wings of the stage a little differently, letting dancers actually come into contact with the curtains. This one belonged to Fernando Sabino, who was as fluid and effortless as ever. 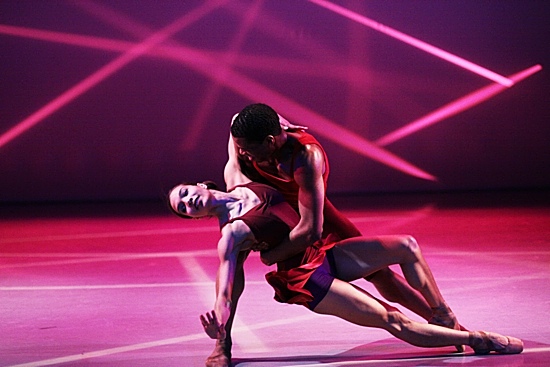 Definitely the crowd favorite, Saideira was way ahead of the game before it even began. Moultrie, who discovered his love of dance in Harlem, told the audience in his introductory video interview that, while he loves a good story, sometimes the best way to dance is just to dance. His piece was inspired by Brazilian nightlife and the way its energy is built out of sheer joie de vivre. “You took that ballet class for a reason,” he said, and asked his nine dancers to dance because they love dancing. Though they all appeared to be enjoying themselves immensely, Valerie Tellmann captured most of my attention. She does a beautiful Moody Lady, but clearly Enthusiastic Smiler is closer to her true self. The couple behind me, though, said (loudly and during the performance, such was their commitment) “This one has Skaggs in it. Finally.” I can’t begin to spell the relieved sounds they made when veteran dancer Phillip Skaggs made his entrance.

It would have been an impossible achievement to top the excitement of the visiting Royal Ballet School and the debut of Richmond Ballet II last month. And, in reality, the only way to get close would be with a new works festival. Its freshness and ingenuity fascinated, and if it were rough around the edges in parts, nobody cared. If the talkback after the show were any indication, the audience was left unsatisfied by these four 15-20 minute works and would have welcomed ones that were much, much longer.

Get into the ballet now, and you’ll be thanking yourself for a lifetime. Performances of the New Works Festival extend through this Sunday. Buy your tickets online or at Richmond Ballet’s box office at 407 E. Canal Street.