Two very different pieces (one of them a world premiere) cap off Richmond Ballet’s fantastic season. This coming weekend marks the last weekend of the last installment in this year’s Richmond Ballet Studio Series, which is its last. That part isn’t true, but it is your last chance until the way-far-away fall to see short works by our resident radical dancers.

First up is the world premiere of Chasing Cello by William Soleau, a choreographer from New York with a history of successful collaborations with RB. When enthusiastically predicting how excellent it would be, my totally non-captive audience (consisting of my friend and my husband) were both like “World premiere! Ha! What does that even mean anyway?” A WHOLE HELLUVA LOT. Once a work is choreographed and performed, it enters the annals of dance history forever, and usually that entry includes when and where it was first enjoyed. The same goes for a new classical composition. There are world premieres, state premieres, city premieres, and even company premieres. It’s an indicator of just how special the performance is (and sometimes just how celebrated it is). It’s also a mark of distinction. 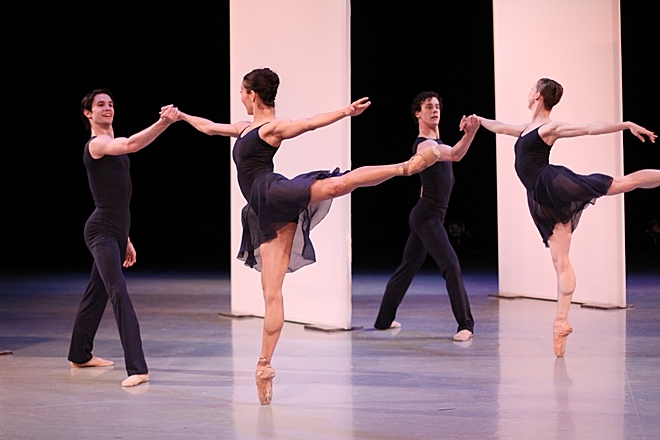 Chasing Cello is a sprightly number to the tune of some J.S. Bach cantatas. Soleau likes to incorporate props, so mobile screened panels change configuration on stage throughout and during the piece. The dancers hang out behind them, dance, pose, sometimes act, and it gives the thing a whole new dimension. Soleau’s new work is neo-classical, which means pointe shoes and familiar movements. It’s all very pretty, and there’s even some comedy worked in. Plus, folks, live music onstage by a pianist and a cellist. That’s both cool and unusual, and the work benefits from it. Possibly because I tend to lean towards the more emotional pieces, Chasing Cello wasn’t my favorite of the night. I found the motif of “dancer stepping intently towards cellist” unsettling, and the occasional flashes of cuteness didn’t do anything for me. Valerie Tellmann and Lauren Fagone were simultaneously joyful and fluid, and as my ballet date said to me afterwards about the sunshiney Trevor Davis: “That dude clearly loves his job.”

Ma Cong’s Ershter Vals provided everything that Chasing Cello did not, however, for those of us who need to feel like our hearts are being ripped out of us and pirouetted upon. I recognized it instantly as one of the first studio series performances I’d seen back in 2010—flowing, sherbet-hued costumes for the ladies and a sort of peasant/farmer/Spanish-guy getup for the fellas, who move emotionally, energetically, and smoothly all at once to traditional songs from Jewish WWII ghettos, performed by Italian klezmer group KlezRoym. It’s…not as upsetting as it sounds, but it’s certainly intense. Elena Bello, usually of Richmond Ballet II, was tossed around beautifully, as was Lauren Fagone again (always with the impressiveness, Lauren). Phillip Skaggs and Thomas Ragland both danced with convincing heart. And, as always with Ma Cong dances, no matter how long it runs, it’s over too soon.

A fitting end to a fantastic season, Studio Four is just good enough to tide us over until the fall. But, then it’s on, Richmond Ballet. It’s on.