They’re back, and this time they are waltzing it up right in tuxes, ball gowns, and newly learned expressions of subtlety.

George Balanchine, ballet legend, did a lot of special things. But something about the delicate (dare I say “tender”??) feel of the Lieberlieder Walzer is particularly endearing. “It’s definitely a ballet where the man’s the man and the woman’s the woman,” says Valerie Tellmann, referring to the classical roles in which male and female dancers find themselves during this piece.

Tellmann told me a lot about the two-act ballet, which pays tribute to 19th century Viennese social dancing to the tune of two Brahms opuses. It turns out, sweeping around a parlor setting in such a controlled, subtle manner doesn’t come as easily as you’d think to performers used to filling the stage with unrestrained energy. Artistic Director Stoner Winslett has been attempting to secure the Walzer for her dancers for years, and now, on their intimate studio stage, the Richmond Ballet joins only a handful of other companies to have ever performed this singular work.

Balanchine’s foundation has a lot of specific requirements, including a two-week rehearsal limit and the inclusion of live pianists and vocalists on-stage. The former is simply an impressive fact to keep in the back of your mind as you witness intricately detailed steps and emotion that emanates rather than explodes. The latter adds a touch of the genuine (my only gripe about the RB’s wonderfully intimate studio theater is the necessity for canned music), which helps to put the period ballroom costumes and gilt chairs into context. 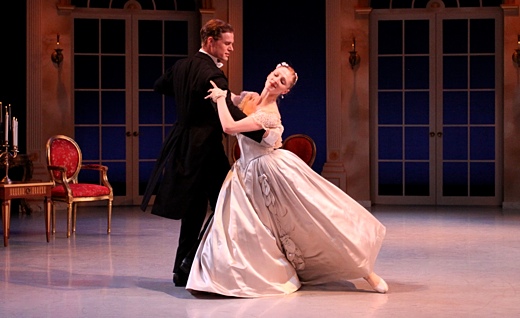 After they’ve waltzed around the room in enormous skirts, the women return to the scene for the second act (now later in the evening) in pointe shoes and tulle, seeming at times more animated, at times more demure. The production notes quote Balanchine as saying, “In the first act, it is the real people who are dancing. In the second act, it is their souls.” The dancers do a lot with this idea of spirit and self, reigning in an impulse to be theatrical and instead focusing on natural expressions of affection. “We were stretched in a way we haven’t been stretched before,” says Tellmann, and though I didn’t see her perform, I did see evidence of this new brand of emoting from the dancers on stage that night. Lauren Fagone and Phillip Skaggs were beautifully fluid–clearly in their comfort zone as some of the company’s typically more subtle members. Normally so quick to dazzle, Maggie Smalls and Fernando Sabino kept their enormously expressive faces and limbs under tight control and demonstrated a real depth of both form and feeling. Shira Lanyi, Ariel Rose, Cecil Tuzii, and Thomas Ragland sweetly rounded out the group, which moved together like it had been practicing this piece for years.

The dreamy feel of the Libeslieder Walzer is, somehow, just the thing to kick off the season. I don’t know whether it’s the candles, the sopranos, the lace-trimmed ball gowns, or what, but I felt suddenly aware that holiday festivities were soon to begin–like one of those quieter Christmas memories, where you go out to look at the luminaries late on Christmas Eve and realize that the roads are respectfully quiet.

Liebeslieder Walzer runs through November 20, and tickets can be purchased online or at the box office (407 E. Canal St.). It would be a shame to miss the opportunity to see something so rare and so well done. Though it may run only about 90 minutes from curtain to curtain, this little ballet is something that will loom large in your memory for years to come.