When you think of the Victorian era, personal pleasure may not first leap to mind. This play, while about pleasure, has a fair share of emotional pain. The production opens to show a split stage: one half fashioned after a Victorian sitting room, and the other a tidy OBGYN exam room. However, we start off in the sitting room, where Mrs. Catherine Givings (Maura Burroughs) rocks her baby, cooing to it, and it is here we learn that the electric light is a marvelous new invention, and also that Catherine is unable to nurse her child. This will be our Mothering Plot Line.

The Moaning Plot Line, however, quickly makes itself apparent when Catherine’s husband, Dr. Givings (Larry Cook), welcomes his first patient of the day, Mrs. Sabrina Daldry (Laine Satterfield), a timid mouse of a woman wearing a veiled black hat that shields her eyes from the harsh light of day, and protects her from the altogether-overpowering world. All will soon be well, Dr. Givings assures her, as he has invented, with a little help from the knowledge of the esteemed Thomas Edison, a marvelous electric device meant to help set her to rights. “Thank goodness for Benjamin Franklin!” Dr. Givings says, calm and staring off into space as Mrs. Daldry moans from the table and the assistant midwife Annie (Lauren Leinhaas-Cook) helpfully holds her hands. 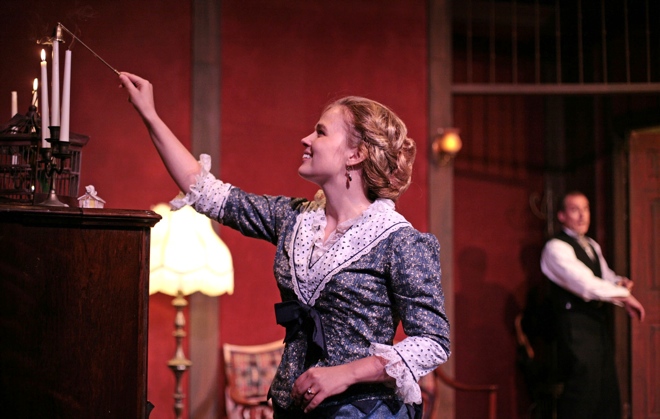 Meanwhile, the Mothering Plot Line advances when Dr. and Mrs. Givings, on the recommendation from Mr. and Mrs. Daldry, hire a “colored” wet-nurse for the baby Catherine cannot nurse. Elizabeth (Stephanie M. Hill) is quiet and a bit sad–as it turns out, she has recently lost her infant, Henry, which is why she is so desirable (at first) to Catherine and Dr. Givings; she has milk, but no child. Dutifully, she begins to nurse Baby Givings.

Everything quickly becomes entangled. With more patients moaning and groaning in Dr. Givings’ office, Catherine is overcome with curiosity, and investigates for herself what all the fuss is about. When she and Sabrina compare reactions, they are befuddled; how can one person become warm in their toes, tingling, while the other feels spasms? At the same time, Catherine is feeling angry at her husband, and suddenly longs for an intimacy she is not experiencing in her marriage. Simultaneously, she is longingly jealous regarding the fact that her baby seems to be attached to Elizabeth now, cooing and smiling for her, instead of Catherine

And then there’s Leo (Adrian Rieder), the charming artist patient who Catherine harbors a certain fondness. AND THEN there’s Annie, the midwife, a seemingly auxiliary character until she and Sabrina interact, opening a new level of intimacy into the play. In short, the play does become a bit tangled up– it’s not hard to follow, but there are a lot of things going on at once in a fairly short amount of time. 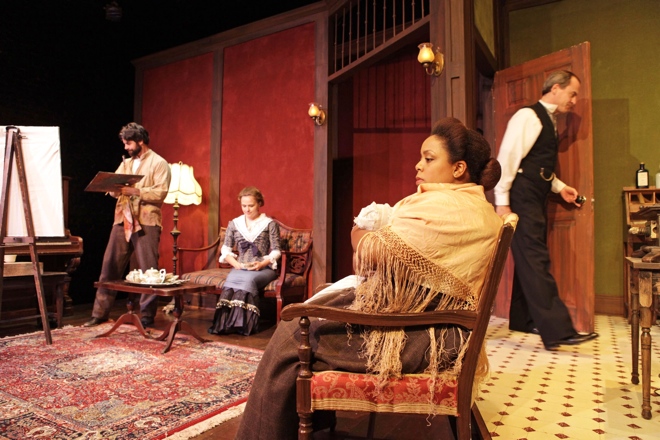 Overall, the play has its good and okay points. Individually, the female characters are less strong; when together, though, they come to life. Catherine and Sabrina are at their best when they are conspiring together, eyes bright with a scientific curiosity and newly discovered sexual appetites. However, one could argue that the individually demure female characters that appear less strong alone are that way because in Victorian times, that was the proper way women behaved. Being a bit tightly-laced can be seen as more a literal thing than a metaphor here. Additionally, Dr. Givings is charming and funny as he chatters blithely on while administering “the treatment,” and his appointments with Leo are cause for much chuckling, particularly when he produces the device he’ll use to “cure” Leo (it’s called “The Chattanooga” — I’ll just leave you with that). A true highlight of the play is a monologue by Elizabeth that will cause a lump in your throat if you have a soul.

I do feel that this play is trying to cover a lot of topics within a small amount of time. The Mothering Plot has one of the only monologues in the play. Is the play about mothering and loss, then? I’m almost not sure if the play itself knows which aspect it wants the focus to ultimately be on.

It runs a gamut of emotions, actor Adrian Rieder agreed when I chatted with him after the show, adding, “[Playwright Sarah Ruhl] has a way of walking the line of genres…there’s poetry…slapstick comedy…drama.” This is absolutely true. In fact, I think my main criticism is that there is simply not more time to delve into the different genres covered, so there seem to be competing plot lines. 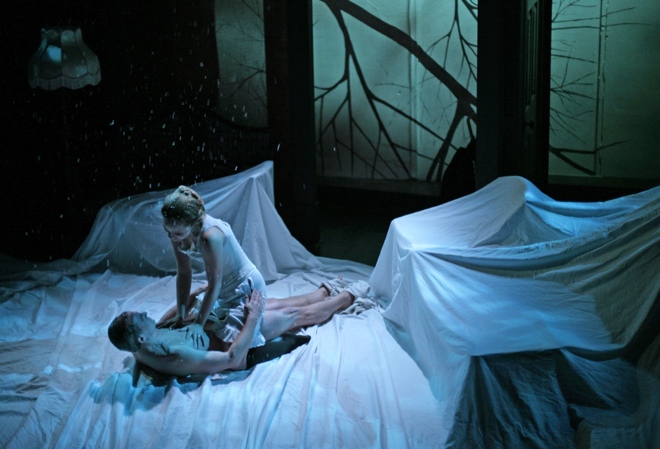 Elizabeth is a very powerful character, perhaps out of all of them the most honest and empathetic, but I feel the play could have been stronger if it had focused more time on the relationship that is built between Catherine and Sabrina. While we see a change for Catherine in the end, what changes happen later for Sabrina, if any? Does she live out her days as (spoiler ahead) a closeted lesbian? In the end, other characters about whom we’ve learned only a little (Leo, Annie, Elizabeth) fade into the background.1

As a whole, though, In the Next Room is sure to please. More time would have been nice, but then, in the time that we’re given with the Givings, we do come to see them as less tightly-laced sex-averse Victorians and instead more human, fragile and flickering.

Why you should see this play

You enjoy adding a little spice to Victorian themes; you like corsets; you like a play that is both funny, heartbreaking, saucy, and conflicting (in other words, a solid play).

You don’t like talking about down there; a plot surrounding, in part, the death of an infant is not your cup of tea (understandable– I’m not making light; consider this a trigger warning); you do not like tight spaces (seating is a little cozy and intimate, as they say)