If Monsters University is any indication, kids are going to have a great summer at the movies. Parents, I think you will, too. When Pixar released Monsters, Inc. in 2001,1 my then-fiance/now-husband and I couldn’t wait to see it in the theater. And we did. Multiple times, if memory serves me.

(What? We were young! We had disposable incomes! Netflix didn’t even exist yet!)

Anway, multiple viewings confirmed that we did, in fact, enjoy Pixar’s witty-yet-sweet tale of James P. “Sulley” Sullivan (John Goodman), the top scarer2 at Monsters Inc., and Mike Wazowski (Billy Crystal), Sulley’s one-eyed assistant and best friend. So when the time came to introduce our son, JR, to the wonderful world of cinema, Monsters, Inc. easily made it on our short list; it’s not too long, the monsters aren’t too scary (if at all, really), and it wasn’t too likely that multiple viewings would inspire us to smash our faces against the wall. Good thing too, because JR was hooked from that day on, requesting to watch it pretty much any time we walked by a television.

As JR’s gotten older, other movies held his interest for a while–we went through a very persistent Buzz Lightyear fixation for a while–but his love for Mike and Sulley has remained pretty constant. Monsters, Inc. is still his go-to movie when he doesn’t feel well or doesn’t know what else to watch; it just makes him happy. 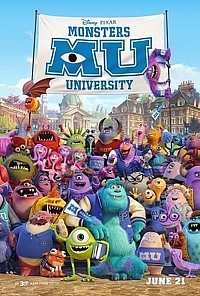 All of this is to say that I was actually a bit nervous to take JR to see Monsters University, the prequel to the film our little boy (OK, our whole family) has come to know so well and love so much. It was similar to the feeling you get when you’re about to watch the film adaptation of your favorite book for the first time: you really want it to be great and you hope for the best…but you also remain somewhat surrendered to the possibility that they’ll totally screw it up. Also: I saw Cars 2.3 I know Pixar has it in them to make a mess of things.

But when I looked over at JR about halfway through Monsters University to find him in the middle of a laughing fit so intense that the only noise coming from his body was a wheezy cackle, I knew we were going to be ok.

While the plot of Monsters, Inc. is centered on Sulley, Monsters University shifts our attention to Mike–specifically Mike as a youngster. Turns out the confident, wise-cracking walking eyeball we saw in the first film was once a very focused student intent on becoming the top scarer at Monsters, Inc.

When Mike (voiced again by Crystal) enrolls in the prestigious School of Scaring at Monsters University4 he soon discovers that book smarts only get you so far when it comes to harvesting screams. Mike also finds himself at odds with Sulley (Goodman), a legacy scarer whose imposing build and natural instincts give Mike’s technical skills a run for their money.

Their feud comes to a head at the “Scaring Final”–the test that determines who stays in the scaring program and who goes–and Mike and Sulley find themselves subject to the wrath of Dean Hardscrabble,5 a flying-lizard-cockroach-centipede sort of creature voiced to perfection6 by Helen Mirren. Declaring that neither Mike nor Sulley has what it takes to be a scarer (because, of course, they each have what the other needs), Hardscrabble drops them both from the program.

So they have no choice but to prove themselves by joining forces with a loveable band of losers (specifically the misfits of Oozma Kappa, Monsters University least-popular fraternity) so they can take part in the annual Scare Games, a competition between MU’s fraternities and sororities that determines who is The Scariest Of Them All. Attempting to thwart Mike, Sulley, and their pals throughout the competition are Johnny Worthington (Nathan Fillion,7 another great casting choice) and his brawny, besweatered brothers of Roar Omega Roar, the top frat on campus.

The premise feels very Old School plus Revenge of the Nerds with maybe a dash of Pitch Perfect…and it is. But that’s not necessarily a bad thing. Sure, aspects of the plot are totally predictable–I mean, it’s a kids movies so cliches are going to happen–but Monsters University ends up sending an important, reality-based message to its young viewers. After all, if you’ve seen Monsters, Inc. you know that Mike doesn’t actually end up being the top scarer; his dream doesn’t come true. But that’s not to say he doesn’t end up right where he’s supposed to either.

Coming in at just under an hour and 45 minutes, Monsters University isn’t necessarily too long on its own, but after 30 minutes of previews8 (at least at the showing we went to) and a short film9, and you might find yourself dealing with some antsy-ness prior to the movie actually starting. But trust me: once the first crop of monsters waddles/scampers/oozes on screen and the Crystal-Goodman banter begins, you’ll be good to go.

At least I’m assuming you will be. But I can only go by the fact that as soon as we left the theater JR started crying because he loved the movie10 so much and feared he’d never get to see it again.

Pixar, this almost makes me forgive you for Cars 2. Almost.

You loved the first one and want to see a prequel/sequel that is just as good as the original. Maybe even better?

You want to deprive your family of a theater-going experience that will actually be enjoyable for all of you.