In his heart, Ridley Scott wanted to make a film about the big questions like why are we all here, man? Instead, he made a movie that pokes at some really big questions and then…well, then nothing. That’s it. As far as I’m concerned Alien movies are defined by three things:

Prometheus, incredibly, lacks the first two! SPOILER ALERT, I guess. Don’t head off to the theatres expecting to see the aliens of yore scampering through the walls melting steel with their acid blood. And chestbursting? Too bad, my friend. Sure, there is “the scene” of which you will speak after you leave the theatre, but it’s forced, weak, and will remind you of a carnival game. 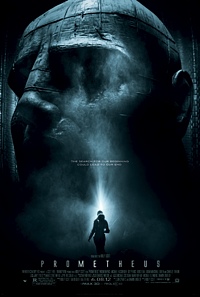 So how do you make an Alien movie with no aliens? Well there are aliens, just not the aliens. In fact, Prometheus begins with a large alien, who (unfortunately) looks nothing like a xenomorph, standing on the edge of a sweeping waterfall eating some soup. As the alien1 downs the contents of his bowl a massive flying saucer flies off into the atmosphere. The soup turns out to be the “disintegrate you down to the building blocks of humanity” kind, and the alien tumbles from the cliff spreading his DNA bits into the water below.

Flash (presumably) forward to 2089 and two archaeologists, Elizabeth Shaw (Noomi Rapace, The Girl with the Dragon Tattoo) and Charlie Holloway, have uncovered an ancient star map that, along with others found in the ruins of earth’s early civilizations, points to the moon of a distant planet. Shaw’s convinced that these maps were left by a race of aliens who created humankind–a kind of open invite to pop in whenever we got the chance / got faster-than-light travel capabilities.

Flash forward, again, to 2093 and the titular Prometheus approaches the moon LV-223. An android named David (Michael Fassbender, Shame) has kept watch on the crew while they’ve remained in stasis to survive the long (well not that long, it has only been four years after all) journey. The crew awaken to learn that 1) they must investigate the origins of life on a distant moon and 2) the trip has been paid for by Old Biff from Back to the Future Part II.2 Well, really it’s been paid for by Peter Weyland (Guy Pearce, The King’s Speech), trillionaire old guy.

Weyland has put Meredith Vickers (Charlise Theron, Snow White and the Huntsman) in charge, and for her first act of business she sends the crew out into a dark and foreboding alien structure–which, I’m sure, usually turns out totally fine. From here you probably know what to expect: creepy environments à la H.R. Giger, milky white android fluids, and plenty of blood & guts.3 But, unfortunately, you shouldn’t expect Prometheus to do any of these things well.

Maybe this is the destiny of prequels. Maybe it’s impossible for a movie with as much visual and cultural history as this one to strike off and do something new while still paying homage to where it’s been. Maybe director Ridley Scott is old.

In his heart, Scott wanted to make a film about the origins of the Alien mythos, the history of mankind, and the big questions like why are we all here, man? Instead, he made a movie that pokes at all of these really big questions and then…well, then nothing. That’s it. While trying to combine the DNA of Blade Runner with that of Alien(s), Scott ended up creating a confused, chestbursted corpse of a film. He named it Prometheus.

But lucky for you, theoretical guy who’s going to drop ten bones on seeing this movie in the theatres, there are some bright spots teetering on the edges of the truly enormous plot holes. Michael Fassbender continues to be awesome and awesomely cast. Charlize Theron, who plays the same character as she does in Snow White but with less shouting, has the sinister thing locked down. And even Noomi Rapace, who wears an ace bandage bikini for a portion of the film, plays a great successor to Sigorney Weaver.

And don’t get me wrong, the movie is beautiful. Creepy ol’ H.R. Giger has supplied the filmmakers with plenty of excellent source material from which to arrange beautiful/disturbing shots. But no bag of special effects tricks can overcome the slimy tentacles of an utterly confusing plot.

Because, guys, plot is the most special effect.

Because Alien and Aliens are just a Netflix away.