Prisoners: Might as well just give up on life

When two girls go missing a father does whatever it takes to get them back–including things that made me curl up in a ball, terrified and shivering. Something happens to your brain when you reproduce. Movies that you once watched with carefree abandon, gems like The Road, now make your back knot up and stomach lurch. I thought it would never happen to me! My film watching habit subsists on a steady diet of terrible-yet-awesome horror movies to no ill effect. But now that my one and only offspring is reaching an age where he can communicate about life in utterly charming ways, my threshold for the entire gamut of child abduction / harm /torture films is super low. 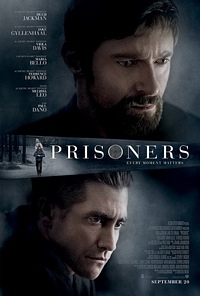 I know, très cliché, but it’s the truth! And Prisoners definitely exceeded whatever small threshold I have left for this terrible, terrible(ly awesome?) genre.

Keller Dover (Hugh Jackman) is a total doomster. He’s got a basement filled with canned food, rope, kerosene, hand sanitizer, and rifles. Like he says early on in the film, pray for the best, prepare for the worst, right? He seems like a pretty decent–if severe–bearded dude that trends towards the conservative side both politically and socially. But still, he’s a guy that would make for a stand up dad.

On Thanksgiving, he and his charming family head across the street to celebrate with their neighbors, Nancy and Franklin Birch (Viola Davis and Terrence Howard). At some point the couples’ 6(ish)-year-old daughters head back to the Dover house and…disappear. After the mood of the two families falls from joking confusion to extreme panic, Dover’s teenage son remembers seeing one of those classically creepy RVs parked on the street nearby. Dover calls the police and Detective Loki (Jake Gyllenhaal) is assigned to the case.

The investigation wears on, and Dover grows increasingly unstable as his daughter remains missing, and the likelihood of her survival begins to plummet. Loki uncovers a mysterious trail of super weird dudes (Paul Dano and David Dastmalchian) and bizarre clues, but fails to make any progress. That’s when Dover beings to take things into his own hands (in terrible, angry ways). General thriller / mystery things then happen that I would be a huge jerk to spoil here.

I really enjoyed this movie, and by enjoy I mean I spent an entire sleep cycle filled with nightmares about a stranger abducting my child. It’s a really well-balanced blend of heart-stopping tension and squint-worthy bloodviolence that will appeal to fans of both thrillers and horror movies. Hugh Jackman plays an uncharacteristic role, which is going to turn some people off, but seemed pretty accurate to me. I mean, dude just lost his tiny, adorable human. A normal person’s reaction to those circumstances isn’t going to look a whole lot like Wolverine or Van Helsing. While Jackman spends the movie unpredictably oscillating between emotional extremes, Gyllenhaal plays the perfect emotionless cop,1 more focused on solving the crime than having emotional connections to the victims and suspects. If we were talking sports I’d say “Gyllenhaal turns in a workman-like performance.”

You’re gonna love looking at Prisoners, too. Which shouldn’t be a surprise since Roger Deakins is the film’s cinematographer. Deakins has worked on just about every beautiful movie that exists, including a ton of Coen brothers films. For two and a half hours,2 Deakins creates a soaking wet environment that’s drained of color–it feels like a real place, a real small town somewhere in Pennsylvania.3

Towards the end of the film, things start to go a little off the rails with the script: there’s a scene involving buckets of snakes. But don’t worry, the tension, a general feeling of foreboding, and Hugh Jackman’s beard will carry you through–if you really want to be carried through a movie about three of my worst fears.4

You’ve really been missing a good, long-lasting feeling of terror and revulsion.

Because you have, care, or know about a family, any family.

At a couple points Nancy Birch converses with her eldest daughter about her missing daughter, which does technically count. But at its heart this film is about fathers, good guys, and bad guys.