Moonrise Kingdom: Too little, too late

Wes Anderson’s latest film is a slideshow of funny, pretty moments, but that’s about it. Terrible news, everyone. Moonrise Kingdom is not the Wes Anderson you were looking for. You’ll watch it, you’ll laugh gently, but in the end you’ll say what the diehard Anderson fan behind me said when the lights came back up: “Well, it’s not his best, but it was one of his prettiest.”

That is, you’ll make those justifications IF you are a diehard Wes Anderson fan like that young and optimistic gent in the theater. If Rushmore, The Royal Tenenbaums, Bottle Rocket, or Fantastic Mr. Fox didn’t float your boat, I advise you to choose another film to see this weekend. There’s nothing for you here.

Moonrise Kingdom is a coming of age story, sort of, about two adolescents on one of those super-quaint New England islands. Everything is grey, green, tan, and red–the perfect palette of a natural scene, punctuated by bright, man-made objects looking awkwardly out of place next to serenely rippling waters. The two adolescents briefly run away from home/camp, and take shelter in the wilderness of their small microcosm. As are all of Anderson’s films, the movie is beautifully shot and meticulously put together. Comedy occurs via props, staging, and timing–a rare thing these days, but a stylistic signature that he’s perfected over the years.

Unfortunately, we’re not just interested in some wham, bam, thank you Wes Anderson. We need the kind of story that Owen Wilson and Noah Baumbach can deliver (co-writers for W.A.’s more successful films). Instead of a cohesive and gripping narrative, like that of Max’s struggle in Rushmore or Royal’s deception in Tenenbaums, Moonrise Kingdom is a showpiece that is nothing more than the sum of its parts.

And to make up for the lackluster Roman Coppola screenplay, Anderson capitalizes on a tried-and-true formula that’s gotten him lots of laughs in the past (and just to be perfectly clear, this is my own rendering, NOT a still from the film itself): 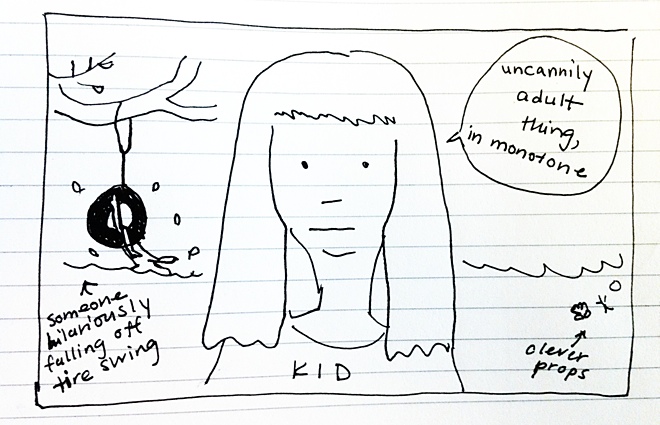 What you see here is your typical “Close-Up of Deadpan Character, Slightly Ridiculous in His/Her Earnestness and Positioned in the Exact Center of the Frame.” In the background, among gorgeous set pieces and props, somebody does something sudden and/or absurd.

Just add a line that seems humorously out of place for the character to say (in the case of Moonrise, that’s usually something very grown-up), and you’ve got yourself a recipe for success. Anderson’s wields this device like a dangerously precise Sword of Comedy in most of his other films. But in this one1, he focuses too much on those fencing skills and not enough on his story. One Deadpan Close-Up follows another in a seemingly endless series of boring moments, as flimsy, undeveloped characters deliver Slightly Ridiculous yet Earnest lines from the Exact Center of the Frame. We don’t have a suicidal Richie to cry for (Tenenbaums) or an eternally cheerful Dignan to root for (Bottle Rocket). We just watch, mildly smiling, until it ends.

That’s not good enough for me. Sure, it’s better than your average, hastily thrown-together snoozefest, but we’ve all seen what Wes Anderson can do. And it sure is better than Moonrise Kingdom.

You’re fuming at my sacrilege, and you desperately want me to be wrong. I am ready and willing to accept your rage, but I do ask that you do one thing. Go see the movie and then wait a week before you wag that finger at me. Ask yourself this: Do you remember anything about it? Do you feel things when you think of it? Do you even remember the character’s names?

And by “stay home” I mean “go see Magic Mike.” I hear that movie is intense.