MIB3 begins with some sort of terrifying supervillian named Boris the Animal breaking out of a secret supermax prison on the moon. Boris is played by Jemaine Clement, which is gonna blow your mind because he looks, acts, and sounds nothing like the guy who makes up one half of Flight of the Conchords. Seriously, look: 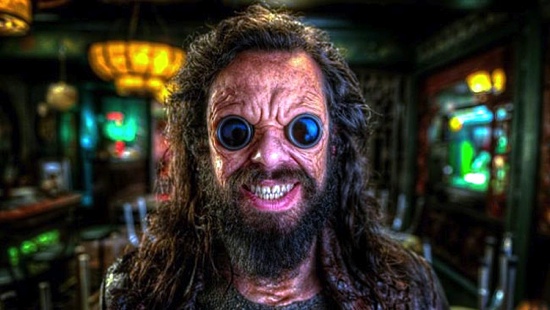 Boris is pissed off at Agent K (Tommy Lee Jones) for two reasons: 1) shooting off his arm back in the 60s, and 2) genociding all the members of Boris’s species (the Boglodites). With his newly found freedom, Boris travels back in time to kill 1960s K (Josh Brolin), thereby preserving both his arm and millions upon millions of his fellow Boglodites.1 K’s long-time partner, Agent J (Will Smith), must then also travel back in time, stop Boris, and save K–nay, save THE WORLD.

Once J finds his way back in time, he eventually meets up with 1960s K who’s the best part of the whole dang film. Josh Brolin was born to play a young Tommy Lee Jones, and it’s comforting to know we’ve got the next TLJ in the pipeline ready for when the current model bites the dust. While I could watch Brolin be charming for pretty much forever there’s only a few, fleeting moments of on-screen chemistry between Smith and Brolin–just enough to remind you how great 90s Will Smith was in Independence Day.

You’d think that sending present-day Smith back to the 1960s would lead to some interesting scenes/jokes about race–and it does, I guess. The jokes just aren’t that funny, and when you pair them with Will Smith’s tendency to occasionally slip back into being the Fresh Prince of Bel-Air you’re left confused about what exactly is a joke and whether or not you should be offended.

And it’s not just on the topic of race that MIB3 prods gently, but ultimately falls flat before really saying anything. The film definitely fails the Bechdel Test; the only two women of note in the whole movie are a Hillary Clinton-esque character (Emma Thompson) and a buxom woman clad in leather and high heels (Nicole Scherzinger). The latter is only featured in the film’s opening scene as the woman who helps Boris the Animal bust out of moonprison. Her mostly exposed boobs are visually paralleled to a jiggling cake2 before Boris sucks on her tonsils with his alien-sized tongue. Right after that she’s sucked out into the cold vacuum of space. Oh well.

MIB3 doesn’t set out to offend, and it doesn’t do it often, but the parts that do stand out because the rest of the movie is so utterly…bland. Its characters are mostly harmless and boring (luckily there are a few cameos to get you through). The plot is standard science fiction fare and is mostly there to serve as a vehicle for some top-of-the-line special effects.3 And the dialogue, which used to be chockablock with snappy Will Smith oneliners, is now so dull that you’ll spend most of your time realizing how old Smith is starting to look. And so MIB3 shuffles on, hitched forward only by the spasmodic tics of 90s Will Smith’s dying corpse. RIP, guys, RIP.

You are Willow Smith.

You are not Willow Smith.