Meet me at the murals: Ham? is up

After being laid off from his architecture firm in 2009, Ham’s wife encouraged him to seize the sudden opportunity to exercise his thirst for art away from the drafting table. Now he’s one of RVA’s most prolific, and sometimes controversial, muralists. After being laid off from his architecture firm in 2009, Hamilton Glass’s wife encouraged him to seize the sudden opportunity to exercise his thirst for art, but this time away from the drafting table. Soon after, Glass, aka Ham, erected this arresting image that sneered over the popular Crossroads Coffee Shop in the Fan: 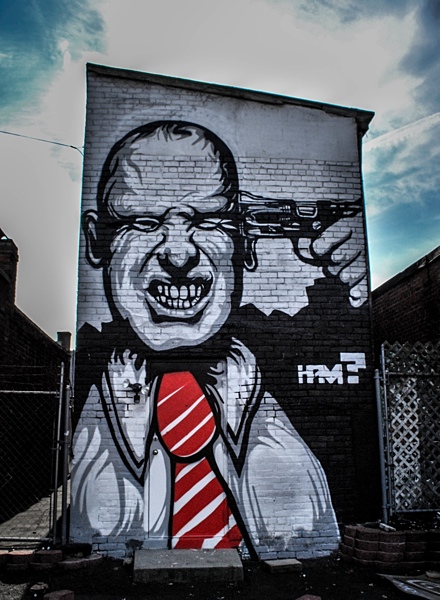 His expression of the recession, the startling image evoked the ire of some sensitive neighbors and sparked a local debate as to what should be done about it. The inscription “Ham?” fueled the fire as folks struggled to figure out who did it, how he did it, and what the heck it meant.

Instead of engaging the verbal assault, Ham prepared his response in paint. Days after completing the Recession 2009 mural, he reacted to the wishes of many by painting over the piece…with a bigger mural. The next day, the neighborhood awoke to Censorship Expressed, his comeback to the controversy. This second mural still sits on the back of ALB Tech and oversees Crossroads, providing a jolt of justice with your morning joe. 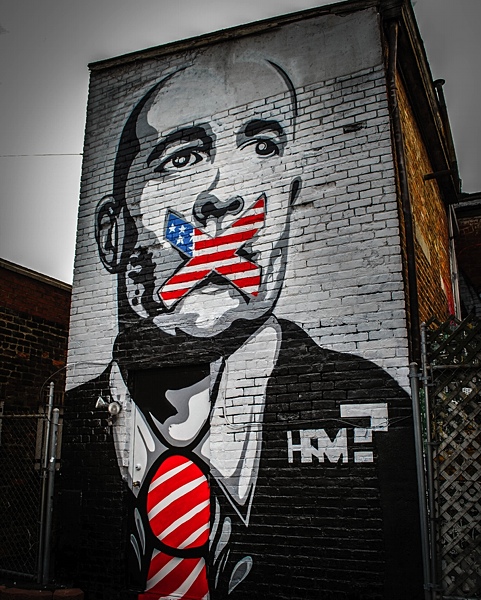 Like all great artists, Ham seeks to deliver a message or evoke a reaction with his work. “Art is a conversation. If people are talking about a mural, then I have accomplished my goal.”

After his recent participation in the RVA Street Art Fest (RVASAF), Ham has people talking again. His beguiling portrait of latex and spray paint immediately asks for attention. A tender, colorless, coquettish character sits atop and contrasts with the stark and brightly colored line work that has become his signature. Wrapped around the femme fatale, like a serpent, is a sash with an inscription that adds to the intrigue: “James, Is That You I Smell?”

While the allure of Virginia is unmistakable, the message has again confounded many passersby. The concept came to Ham once he decided to highlight the James River as the central figure in our collective attraction to RVA. Like lovers separated by time, the painting’s protagonist longs for the allure of the river. The river’s scent is as soothing as the perfume of a long lost mate.

“The purpose of the mural is to highlight the James River as a figure we all love.” 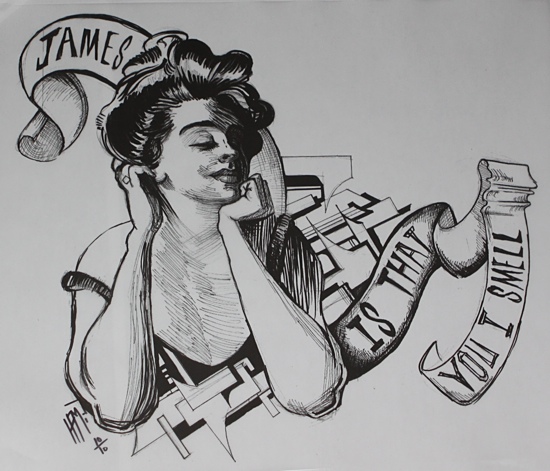 Ham was good enough to share with us the original sketch for the mural.

The process of transforming a rough sketch into a thirty-foot mural is where his true artistry shines. Ham tells us the sketch is just an idea and does not dictate the piece that emerges on a wall.

“Sketches are only the foundation for my murals. Once the idea is complete, it is time to paint. Then the mural speaks to how I am feeling at the time, the energy of my environment, the direction of my inspiration.”

The charming central character in the story appears inspired by the iconic Gibson Girl. Illustrator Charles Dana Gibson penned this fictional character as the feminine ideal of beauty, and her image appeared in magazines and merchandise in the late nineteenth and early twentieth century. The strong, independent figure asserted her place in society and often left men daring enough to cross her path happy but hapless. Like Ham’s star, her aloofness adds to her allure.

Ham explains that as he began to sketch for an Altria-sponsored mural on Broad Street, he reviewed many portraits and was drawn to the Gibson Girl. The influence of that artistic process is obvious in his illustrations of female characters, including the one in Virginia.

While Ham is scaling and painting blighted buildings on the weekends, Hamilton Glass designs bold new buildings on the weekdays. Working on hospitality projects just steps away from the power plant for 115-year-old architecture stalwart, Baskervill, Hamilton exhibits his verve for precise architecture design and drafting in his art. In addition to his unique understanding of scale (try free handing a thirty foot portrait without the appearance of a disproportionately giant head or hand), Ham’s beautiful flowing figures often melt into sheer, measured lines and shapes.

The lines near the bottom of Virginia and his other murals around town reveal both his graffiti past and hotel designing present. They engage the left side of his brain and create a peaceful platform for his creative illustrations. The line work also explodes on the walls in ways not expected from the original sketches.

“Drawing the lines eases my mind and creates focus and structure for the portrait.”

The line work also attaches a splash of color–one of which is always pink…because ham is pink.

Ham recently put up a portrait of a bartender on the side of new restaurant, S@mple, in the Fan. The new mural is right across the street from his original work next to Crossroads. The owner of those businesses has been an ardent supporter of Ham’s and a positive force in the neighborhood. The lines on that portrait are more intricate and extensive than ever and scamper madly up the side of the wall, exhibiting how his murals have developed. Line work clearly excites the artist, revealing his most animated side. 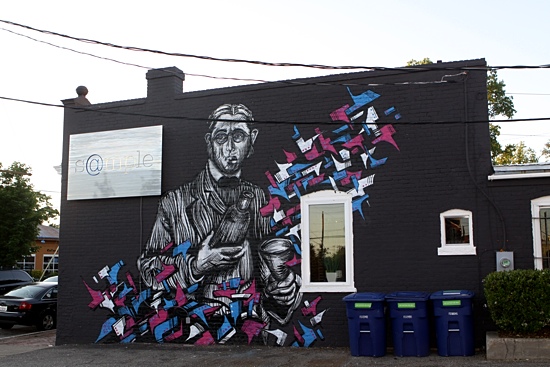 While a lightning rod for controversy, Ham is an extremely active servant of his community. The talented architect appeared at our Wednesday meeting as a starving artist–with pants covered in paint and t-shirt on wrong side out. He had spent the afternoon working on a map with the kids at Art 180 that charts the locations of their dream places.

He has been weaving dreams for disadvantaged youth at Art 180 and Binford Middle School for three years. He recently served as a facilitator for a discussion at Binford that brought together educators, administrators, and interested citizens to discuss ways to revolutionize Richmond’s schools and curriculum with creativity. He downplays his service to others but not what he gains from our young people:

“Working with those kids keeps me creative and improves my work.”

Although he would never say this either, RVA’s future artists must also be inspired by his boldness. While his architecture training has given him some sense of size and design, Ham began with no formal training in painting and no preparation for the demanding physical test of covering a larger than life canvas.

“Murals are just something I convinced myself I could do.”

Likely most amazing about Ham’s art career is that it literally just started. Climbing the side of ALB Tech was the maiden voyage of his life as a muralist. The RVA Street Art Fest will likely further accelerate his rapid ascension in the street art world. Look for great things out of this local artist.

“The event was probably the highlight of my art career! It was such a great experience getting to talk to so many experienced artists. I almost wish I could have sat and watched them paint all weekend. Being with these guys definitely turned on a light bulb in my head. I’m looking forward to my own work and evolution. Hopefully I get a chance to paint next to them again.”

In addition to the S@mple mural, since the festival, Ham has also live painted for the new RVA Grooves series and dropped his familiar lines on the wall of West Coast Kix. That project launched with an opening reception on Memorial Day Friday and jammed the Carytown store with eager fans and excited collectors from as far away as Brooklyn. And then, thanks largely to revered RVASAF organizer Ed Trask, Ham and the S@ample mural hurdled over no small set of competition to win the “Best Exterior Development at Local Restaurants” category in Style Weekly’s recent “Best of Richmond” awards.

Ham is just as quick, though, to point out of what he is most proud.

“I don’t know where I would be without my wife, man. I owe her everything.” He shared a heartwarming story about how his precocious new daughter (only 19 months) will walk by one of his murals, point without prompting, and say “Daddy!” The tale seems a microcosm of the things closest to the artist’s heart: his family, the limitless minds of children, and the upward trajectory of his art career. It may be just a matter of time before more and more passersby point to their favorite murals and instantly identify, “Ham.”

It should be a fun ride for Ham and those of us watching and cheering on his work. The development has been rapid. He tells us that each of his works is shaped by the previous one like a springboard, pushing each new piece into a different direction. Eventually, like life, the story of one’s art can veer into all kinds of directions, a transformation that energizes Ham.

“Recession could have been up for two hours, two weeks or two years.”

When the conversation changed, the wall evolved with it. Ham suggests we stay tuned as some developing social discourse may one day ask that wall to shout a new message. 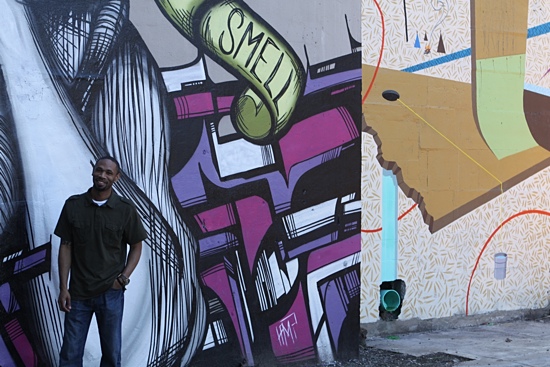 The West Coast Kix show continues through June 28th and features original paintings and drawings by Ham, together with photographs of his murals by Shannon Santiago.