The Wonderful Story of Jesse Lyon, Richmond Ballet’s newest dancer, who is here from France to charm his way into your heart. Richmond Ballet II, the RB’s second company, has made a lot of great things possible for everyone’s favorite dance studio–more travel, more opportunities to perform, another way to groom and nurture young dancers, and also, Jesse Lyon. Hailing from France, Jesse didn’t take the most traditional route to ballet. He does, however, take the traditional route to being French: charming and funny and annoyed by the quality of commercially available loaves of bread in America.

“The wonderful story of Jesse Lyon” (his tongue-in-cheek words) begins with a French circus, where his mother teaches. He grew up doing acrobatics and gymnastics–learning all the fun, physical tricks–until it came time to audition for the circus. That meant dance class. Jesse relocated to New York for a summer, and discovered that, lo and behold, ballet combined the physicality he loved with the artistry he didn’t know he had been missing. At the time, he was 18, practically ancient for someone starting their dance training. “I thought, ‘I don’t think I can do this. I’m too old,’ but when they accepted me at a professional level dance school, I started to think that maybe I had a shot at this.”

To his parents’ surprise, Jesse left college after one year to attend dance school in Cannes before relocating to the Washington School of Ballet in DC, under the instruction of Kee-Juan Han. Han’s reputation for hard work did not disappoint. “It was like ballet boot camp,” says Jesse. “And I didn’t even know what fifth position was. They really took me and made me work hard.”

After another couple of years, Jesse auditioned for Richmond Ballet, whose reputation for having a multifaceted repertoire and treating their dancers well had reached his ears more than once. He joined Richmond Ballet II in August 2013, and is settling into his new life gracefully (duh).

“I did lots of acrobatics for a long time, and after awhile, it’s like ‘How many backflips can you do? OK, you can do one backflip? What’s next? You do two backflips? Then you add a twist!'” Jesse remembers, citing the “almost spirituality” of ballet as an irresistible pull onto this career path. 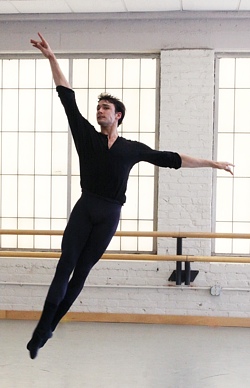 The upcoming New Works Festival, this year’s Richmond Ballet Studio 2, gives Jesse the opportunity to dance and watch his colleagues dance pieces from all sides of the spectrum. His fellow Richmond Ballet II dancer Gavin Stewart explores his choreographer side, to the delight of Jesse and the rest of the participating dancers. “It’s the first time he’s choreographed a big company like this, so it was great to see how the communication was so easy. Also, everyone wants to make Gavin’s piece good because he’s a friend.”

That’s not to say the other three choreographers involved with the festival won’t get the full treatment. Jesse’s experience watching former New York City Ballet dancer Melissa Barak’s piece has reconfirmed his reasoning for joining the company to begin with–“Gavin’s and Melissa’s pieces are two different worlds, one having a storyline and one being more abstract…but when I only do ballet, I miss contemporary, but when I do contemporary I miss ballet. I like switching because I meet different people, and that’s why I was attracted to RB because they were doing classics but also new things.” The two other choreographers involved, Peter Quanz and Edgar Zendejas hadn’t arrived into town at the time of my interview, so those two pieces were still cloaked in mystery. Yes, that means the dancers have about a week and a half to learn an entirely new dance. And yes, they tend to just nail it. Possibly because it’s so refreshing to work with a choreographer who’s tailoring their piece just for your group of dancers. Says Jesse, “It’s an artistic collaboration. When we do a ballet, we know there is a way to do it, there is a right and wrong, but when we choreograph, we work together to do something that looks cool.

In the spirit of the French Film Festival next weekend, Jesse humored me by answering some questions about France vs. Richmond, Virginia (the eternal debate).

“I do miss bread, but this one [gestures to the crust of bread in his hand]…not that bad. I miss speaking French a lot. It’s hard to make jokes in another language–hard to be funny. I miss my family and my friends.

“But, I love the energy in America. In France, it’s a lot about security, people try to get their job, get their retirement, but there’s an energy in America that you find less in Europe. Sometimes it can feel a little naive, but the difference is that in America, if you tell someone ‘I want to open a business or be a dancer or whatever,’ they’ ll say ‘Great!” In Europe, they’d be like, ‘Are you crazy? With the taxes and everything?’ I could never have become a dancer so late if I had stayed in France. They would have told me I’m too old. I wouldn’t have people believing in me. When I came to America it was easier, they were like ‘That’s cool, do it!'”

Guys, thank goodness we are so welcoming and encouraging. We get Jesse and France doesn’t, so they can have their delicious bread.

Check out Jesse from Tuesday, March 25th through Sunday, March 30th at Studio 2: New Works Festival. He is truly a sight to see. Bonus points if you get charmed afterwards.