JGL and Bruce Willis star in a science fiction movie that will make you want to pause Parks and Recreation, put on pants, and head out to the theatre. The first thing my wife said about Looper was:

We’re going to see Looper tonight. Judging from the trailer, they’ve apparently altered JGL’s face. Why would they ever do that?

Which, valid concern, people! Joseph Gordon-Levitt (The Dark Knight Rises) does have quite a face, and there wouldn’t seem to be a whole lot of reasons to go screwing around with it. That is, unless he needs to play a young Bruce Willis who also has quite a face (for different reasons). And in Looper, folks, he does just that! 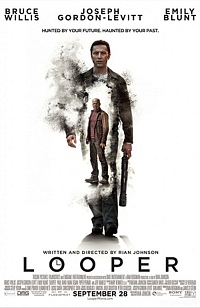 In the 2070s, you can’t just murder a dude and dump his body in the East River like you could in the good ol’ days–disposing of bodies has become nearly impossible due to “technology.” But do you know what’s not impossible due to “technology?” Time travel! So the big crime bosses of the time snatch up the person they want to dispose of, tie them up, put a bag over their head, and send them 30 years back into the past. Waiting for them is a “looper,” who shoots them dead with a futureshotgun (“blunderbuss”1) and collects a bounty in silver.2 Eventually, for reasons that aren’t really made clear, after the looper gets old he’s snatched up and sent back in time to be shotgunned to death…BY HIMSELF. It’s called “closing your loop.”

JGL plays a young looper named Joe, who dutifully blows dudes away, saving up his pieces of silver for the thirty years after he closes his loop. Joe’s not the best of people: he kills for a living, he’s addicted to eyeball heroin, and he’s not above betraying his friends. His life’s an ongoing smudge of killing, drugs, and sex–it’s not as cool as it sounds.

One day, the man from the future that pops up in front of Joe’s gun isn’t wearing a hood, isn’t tied up, and looks a lot like Joe. That’s because…it’s Bruce Willis as thirty-years-later Joe! Future Joe quickly escapes–because he’s Bruce Willis and he can pretty much do whatever he wants–but leaves Young Joe a note telling him to get out of town as quick as he can–crime bosses from the future frown on “letting your loop run.” Future Joe is on the run because, where he comes from (the future), an ultra crime boss–dubbed “The Rainmaker”–is closing loops left and right and anyone caught in the middle ends up dead.3 This includes Future Joe’s wife, which is why Future Joe has come back in time to kill The Rainmaker before he can ever get started. This is, of course, standard operating procedure for time travelers.

If the mention of time travel brings to mind other shitty summer sci-fi thrillers like Total Recall and Battleship, fear not! Looper is a Good Movie! It’s got actors, plot, set, tension, and all kinds of other stuff that you’d expect find in a respectable film. No, seriously! I’d even say this the best sci-fi movie since Moon!4

And like Moon, Looper shows restraint when it comes to computer generated space ships, skylines, or super villains. In fact, the whole film takes place in either Future Kansas City, which looks a lot like Regular Kansas City, or on a sugar cane farm that wouldn’t seem out of place in 2044, 1944, or 1844. Director Rian Johnson (Brick) puts just enough future bric-a-brac in there–Minority Report-style phones, drugs delivered by eyedroppers, and there’s a cool looking motorcycle thing that’s basically a jet engine with a seat–to remind you that this movie does in fact take place in the future.

The best part about Looper are the scenes between Young Joe and Future Joe. Willis has good comedic timing and to see him work with a younger actor–one who’s basically playing a caricature of him–is great. Think about it: Willis has a very distinct way of speaking, smiling, and constantly squinting his eyes at every single thing–Levitt nails this stuff. Plus JGL spent three hours each day putting on makeup that made him look more like Willis. Between the great acting and the prosthetic, uh, face?, the two are enough alike that it’s easy to buy them as present/future versions of each other. But, to be honest, after looking at JGL’s fakeface for a while, it started to look stiff and plasticy–but maybe so does Willis’s realface?

So, the Big Question. Can you, in the present, kill your futureself that’s been sent back in time? Won’t you slowly disappear from photographs? Won’t Biff marry your mom? Doesn’t that stuff only apply if your futureself kills your presentself? I dunno! I’m not sure Looper does either, and it doesn’t spend a whole lot of time dwelling on the potential paradoxes–which was a great decision by Rain Johnson (who also wrote the film). Nothing kills the mood of a good time travel flick like barfing up some bogus psudeoscience to clear up a temporal paradox.

Because you’re tired of the summer’s seemingly endless stretch of horrible “movies.” Or if you love JGL or Bruce Willis (but honestly, who doesn’t). Also there’s this awesomely disturbing scene that takes advantage of time travel’s side effects for truly twisted results. AHHHH I can’t stop thinking about it!