That’s the point of The Listening Room, a series of intimate musical shows played to a silent audience. The rules: shows start on time, and the audience is to remain mum whenever musical acts play. The concert series celebrates its fourth year at the Firehouse Theatre tomorrow.

The series debuted after about a year of conversations between musicians Jonathan Vassar and Christopher Payne.

“It was something he had been thinking a lot about, and something that I was thinking about,” Payne said by phone last week. “Wouldn’t it be nice, since we do play slightly less loud music” to not have to compete with the vocal hums of bars and large venues? “We were looking for a better way to connect with audiences,” he said.

While musicians take the spotlight during performances, Payne said audiences make up an equally important part of the equation. Without an audience, a musician’s work goes unheard; without the musician, the audience goes unfulfilled. “That’s the transaction that happens,” Payne said. Giving both musicians and audiences a quiet environment for that musical transaction is a simple, but radical, idea.

The first Listening Room performance took place four years ago at the Michaux House of St. James Episcopal Church on W. Franklin. To Payne’s surprise, 85 people showed up. Not only was the crowd’s size surprising, but also the crowd’s respect for the format. At 8:00 PM, when the concert was scheduled to begin, “everybody got quiet and moved to the chairs and got ready for the show” without being asked, Payne said. His reaction: “Wow, there are a bunch of people…that were craving that same sort environment” he and Vassar craved.

Those people kept coming back to The Listening Room. “We saw it swell up to 100 people, 120 people” over the next several months, Payne said. “That first year that we were doing The Listening Room, it had this really raw magical thing about it.” In 2011, The Listening Room moved the monthly shows from St. James to The Firehouse Theatre.

Payne said that some performers have commented in between songs how strange and eery it sometimes is to play to such a quiet crowd. “Everybody is listening to every note, every word,” Payne said. Although some performers need time to adjust, most still enjoy the silence. “Almost everyone is appreciative of that environment.”

Payne said that shows are curated deliberately, sometimes filled with similar acts, sometimes with different bands that have some unifying characteristic. “We have a really strong group of regulars that come no matter who the band is, which is one of my favorite things,” Payne said.

Most of those performers are Richmond-based, partly because Payne must schedule Listening Room shows around the Firehouse’s schedule which makes booking out-of-town bands more challenging.

But a new “The Listening Room Presents” sub-series helps stage out-of-town acts in venues around town. “It’s more like a regular show, but we want to infuse it with the ethos of The Listening Room,” Payne said. “We’re hoping that people will go there and listen more than they would at another show.”

From booking bands to setting up equipment, The Listening Room is a volunteer operation. “I think it’s truly a group effort,” Payne said. Looking forward to celebrating its fourth year on Tuesday, Payne wants the show series to continue its trend of growth over the coming years. “I want to see The Listening Room be the household name for the listening music experience in Richmond,” he said.

The Listening Room celebrates its fourth anniversary on November 26th at 7:30 PM at the Firehouse Theatre. Tickets are free, but a $5 donation is suggested. 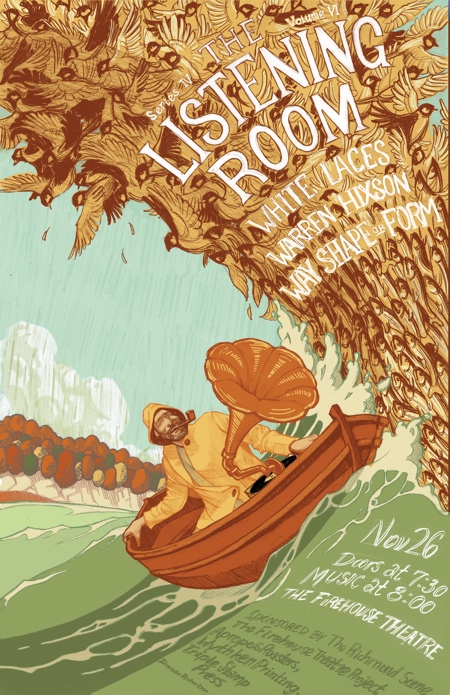