There’s never been a better, more beautiful use of 3D in a movie. Ever. Life of Pi is about a teenager’s brutal experience surviving, lost at sea, in a lifeboat with a bengal tiger. Or is it about how culture and family shape who you are? Or is it about finding god in the face of suffering and disaster? OR IS IT ABOUT ALL THREE? Well, whatever it’s about, it’s fantastic to watch. 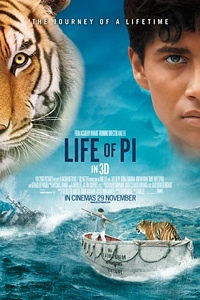 Pi,1 the titular Pi, spends his childhood in Pondicherry, India growing up on the family’s zoo. Pondicherry is a cosmopolitan area of India with French, Muslim, and traditional Indian influences, and each culture puts it mark on young Pi. While he begins his life as a Hindu, he asks to be baptized, and participates in daily Muslim prayers. Pi’s father–who sees himself as part of a new, modern India–wants Pi to use reason above all else when making life’s choices. Pi’s mother (played by Indian superstar Tabu), who was cast off by her family after choosing to marry Pi’s father, sees religion as the most important way to maintain a connection to your past. It’s this tension between the two sides of his family–past and future, religion and reason–that makes Pi an interesting, if a bit quirky, kid.

The first act of the movie ends with Pi’s father selling the zoo, packing the animals into a huge cargo ship, and embarking on an ocean voyage to Canada. The second act begins when a massive storm sinks the ship, leaving Pi and a bengal tiger named Richard Parker2 alone, stranded on a lifeboat. The rest of the film focuses on Pi and Richard building an uneasy truce in the middle of the Pacific Ocean as they rely on each other to survive.

Life of Pi is an absolutely gorgeous movie. Ang Lee (Crouching Tiger, Hidden Dragon; Brokeback Mountain) was such a natural and excellent choice to direct this film; believe me it could have been a lot worse. Early on in the process, M. Night Shyamalan was tapped to direct Pi, but declined because, and I swear this is a quote: “I was hesitant [to direct] because the book has kind of a twist ending.” What?! WHY DO YOU THINK THEY CALLED YOU, GUY? But, luckily we’re spared M. Night dropping a barf on yet another script.

Instead of a barf-covered shitpile, we get something that is thoughtful and beautiful. Every shot feels intentional, and the best part is that Lee lingers on each scene long enough for you to really take it all in. At times it feels like you’re watching an excellent series of exceedingly beautiful photographs.

Most of the Life of Pi takes place in the middle of the Pacific, so it would have been easy to go all Open Water and force the focus of each scene onto Pi and emphasize the emptiness of the ocean. But Lee does almost the opposite. There aren’t a whole lot of scenes where Pi is actually isolated–even though he is totally alone (save for the tiger, of course). There are whales, flying fish, luminescent algae arrayed into beautiful patterns, and the seascapes created by Pi’s mind as weeks of solitude start to take a mental toll. Sure all of these amazing sights are computer generated, but you’re not going to mind (or even notice). Lee blends the ocean and the sky, realism and surrealism3 in really fascinating and beautiful ways. It’s hard to explain, but it is wonderful to watch on a big, giant screen.

And yeah, this movie is in 3D. If the third dimension isn’t your thing, too bad: Movieland has exactly one showing of the 2D Life of Pi, and it’s at 12:15 PM. This movie doesn’t really need 3D, which might be why its the most successful 3D movie I’ve ever seen.4 Lee uses it to add depth to an already visually dense movie and (almost) completely avoids using it to poke you with long, pointy objects. A few shots are filmed from Pi’s point of view, and it’s these that have the most obvious (intrusive?) uses of 3D.5 But the technology really shines, however, in the abstract scenes created by Pi’s mind, where Lee piles layers and layers of oceanic animation on top of each other. It’s subtle, but totally awesome.

This movie–and the book, presumably–tackles some big and universal themes: religion, family, self, regret, death. There’s lots to think about here, and if that’s your jam, great! If it’s not your thing, don’t worry! Just sit back, zone out, and watch the scenery–it’s totally worth it.

BECAUSE IT IS AMAZING TO LOOK AT! GO LOOK AT IT.

You’re afraid of the ocean, wide open spaces, or tigers. Or maybe you just have a super wide head and the 3D glasses don’t fit on that massive mellon.