Killing Them Softly: With his movie

Killing Them Softly is a series of scenes, some of which are really great, cut together to make a “movie.” Unfortunately, the final product is whatever’s the opposite of “the sum is greater than the parts.” Killing Them Softly is director Andrew Dominik’s (The Assassination of Jesse James by the Coward Robert Ford) third film and second film starring Brad Pitt. It’s set in a nameless, rundown city—-it felt like Detroit1 but was probably Boston (Ebert insists its New Orleans)–during the leadup to the 2008 presidential election. You know, ‘Merica is going through a rough patch that summer of ‘08, and no one is immune–not even gangsters! 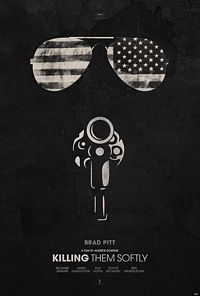 Markie Trattman (Ray Liotta–who, while looking kind of rough these days, still pulls off the organized crime thing perfectly) runs a couple of high-dollar, illegal card games. Some stuff happens and two low level crooks, Frankie (Scoot McNairy) and Russell (Ben Mendelsohn), end up on the wrong side of some Powerful Dudes. Frankie and Russell make a mess of the gambling racket, and, as a result, the games get shut down. When there are no games, no one spends any money. When no one spends money, the Powerful Dudes are unhappy. When the Powerful Dudes are unhappy, they call in Jackie Cogan (Brad Pitt) to clean things up–in a Godfather kind of way. I don’t want to give too much else away because, frankly, there’s not a whole lot going on in Killing Them Softly.

Killing is a series of scenes, some of which are really great, cut together to make a “movie.” Unfortunately, the final product is whatever’s the opposite of “the sum is greater than the parts.” The sum is less than the parts, which is a durn shame because there are some great parts.

I loved Scoot McNairy2 as a not-as-smart, less-ripped, Mark Wahlberg-type bad guy with a heart of (mostly) gold. And Ben Mendelsohn plays an incredibly believable3 (and detestable) Australian heroin addict. Except for one irritating drug-use scene, their screen time together is awesome. Then, about halfway through the movie Tony Soprano (James Gandolfini) shows up! He’s great! And Richard Jenkins steals the show as the Powerful Dudes’ gobetween. He basically reprises his role from The Cabin in the Woods, and it’s absolutely wonderful to watch him haggle over the mounting costs of hookers and hitmen as if they were (and I guess, in his line of work, they are) an everyday business expense.

But as good as all of these individual performances are, they don’t work or even really fit together in a meaningful way. Sure they’re all about gangsters living crappy lives in a crappy town, but so what? You never know enough about anyone to really know why (or care why) they do anything.

And then there’s the forced attempt at paralleling the economic crisis in American with the gambling crisis in this mob community. Radio and television clips from the 2008 election are used to narrate and transition between scenes…between every scene. It’s not very subtle and gets old pretty quick. Since you never really know anything about any of the characters, you’re left to speculate how exactly all of this political mumbo jumbo fits in with the plot. Do the mob bosses represent the fat-cat presidents of America’s financial institutions? Is Brad Pitt’s hitman character supposed to be Barack Obama? What is Tony Soprano’s doing here again?

The movie ends with conversation between Cogan and Jenkins’s character, discussing the final payment for services rendered. Pitt ends by saying, in what I guess is supposed to be a totally sweet burn, “America isn’t a country; it’s a business. Now give me my money.” Instead of being like “Ohhhh shit, burnnnnn,” you’re kind of like “Ohhhh, you wanted to make that kind of movie.” If Dominik’s had wanted to make that kind of movie, he just shoulda gone and done it.

Your son4 is one of the actors.

Oh, tons of reasons, one being graphic violence. There are plenty of bloody, violent scenes (complete with unnecessary slowmo) that you may want to avoid. But if you love violence (?), there are lots of other reasons to stay away from this one.