John Carter: A man walks into a Barsoom

A Civil War vet from Virginia ends up on Mars. Why would you not want to see this movie? The premise is simple. Oh, no it’s not. It’s the craziest thing you’ve ever thought of. Southern gent and embittered former soldier John Carter finds a cave with a bald guy in it and suddenly finds himself embarking on a series of interplanetary adventures with red and green people and a devastating weapon made out of some sort of terrible light. Based on Edgar Rice Burroughs’s A Princess of Mars, the film riffs on what folks a hundred years ago thought about other planets.

Why would you replace a title that sounds so fantastically interesting with one of the least astonishing names in the English language? The answer lies therein, my friend! Captain John Carter is a regular guy–as decorated officers of the Confederate Army go–so it’s extra jarring when he finds himself on Mars. 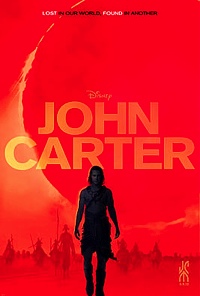 And, hey, the Martians he meets don’t find his name boring. They think he’s entirely exotic, what with his ability to defy gravity, his dainty white skin, and his performance in Friday Night Lights. He immediately runs into trouble, beginning a complicated relationship with the Green Martian Thark tribe. They’re kind of primitive and warlike, yet the type of warriors that live in tents and hatch (adorable) babies in caves but shoot their enemies with sophisticated space guns.

The Tharks are bystanders, casually watching the Red Martians, who are humanoid, destroy themselves in a civil war that…what!? A civil war? Why, John Carter is familiar with those! Instead of blue and gray, we have red uniforms and blue uniforms, and don’t get down on yourself if you have trouble figuring out which color is good and which color is bad for awhile. It will be made clear to you, just like much of the rest of the plot that at the outset is so surprisingly difficult to follow that you will wonder if you are, indeed, suddenly very drunk.1

For John Carter is no run-of-the-mill action adventure flick. The planet of Barsoom (that’s Mars to us ignorant Earthmen with our endless oceans and show-offy green plants) has a complicated history, mythology, and social structure. I haven’t read the novel2, but it must be fairly complex. At any rate, the film seems to touch on environmental, religious, and political issues of our current day, hitting the ground running and not slowing down until the very end.

I keep trying to figure out why I automatically assumed John Carter would be a train sure to wreck as soon as it left the station. I guess a trailer full of ships and explosions and CGI creatures and shirtless guys doesn’t inspire confidence in this day and age. It’s simply too easy to put together a movie that’s visually amazing. Or, more accurately, we’re no longer easy to visually amaze. So we see an ad for a film like this and we barely pay attention to it. It’s a shame, because the script is smart enough, the acting is good enough3, the pacing is clever enough, and the story is more than engaging. I wouldn’t go so far as to say it’s the best science fiction movie ever made, but it certainly operates on more planes than, say, Avatar4.

You’ve been hankering for a good sci-fi epic to sink your teeth into. John Carter has some quaint “this was concepted in 1917” moments, if you’re sensitive to them, but it’s a really neat story overall. Oh, and Richmond has a cameo. Sorta.

You can’t get over the fact that Carter’s body only seems to feel the effects of Barsoom’s lower gravity levels by becoming lighter and stronger, instead of, say, asphyxiated. But it’s a movie about instantaneous interplanetary travel. I suggest you take a deep breath of Earth’s plentiful oxygen and relax.