Iron Man 3 takes Tony Stark (and more importantly Robert Downey, Jr.) out of the Iron Man suit for the majority of the film–which is great because that’s what you’re there to see anyway. This whole thing started with Iron Man five years ago.

Since then we’ve seen five movies set in the Marvel Cinematic Universe, all part of a group of films dubbed “Phase One”1 which culminated with The Avengers. Now, Iron Man 3 kicks off Phase Two2, followed by Thor: The Dark World, Captain America: The Winter Soldier, Guardians of the Galaxy, and finally The Avengers 2. That’s a lot of retreads; other than Guardians you’ve got to wait until November 2015’s Ant-Man before anybody new shows up. But that’s OK, because Marvel’s doing a bangup job with most of these films and if not a bangup job then a decent enough job that still nets them hundreds of millions of dollars.

And that’s not an exaggeration. In fact, Marvel is making billions of dollars from these movies. Just this weekend Iron Man 3 brought in $174 million, good for the second best opening weekend of all time–behind The Avengers.3 Now that Marvel owns a spandex-clad money printing machine, you can expect a continual and steady flow of superhero flicks from now until we reach the logical and terrible conclusion: a Red Tornado movie. Luckily Iron Man 3 is far, far from terrible. In fact, it’s easily the third best entry in the Marvel Cinematic Universe! 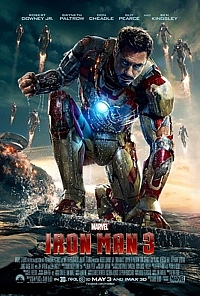 So what’s the haps these days with Tony, Pepper, and their stunning cliffside house in Malibu? Well, it seems that Tony’s having a bit of anxiety after flying through that wormhole above New York City to throw a nuclear bomb at an invading alien horde (see: The Avengers). He’s having panic attacks, he can’t sleep, and he’s spending way too much time building way too many Iron Man suits.4 Meanwhile, two things:

Spoiler alert: these two things may be related.

The Mandarin takes things next level by blowing up Stark’s bodyguard (Jon Favreau!), to which Stark responds by giving out his (and Pepper’s) home address and telling the Mandarin to bring it. The Mandarin says, “Oh, it’s already been broughten” and shoots some rockets into Stark’s lovely Malibu mansion. Things escalate from there in The Time Honored Action Movie Way.

I’ve talked before about how I’m not too thrilled that generic “terrorists” have replaced Soviet Russia as America’s enemy of choice. Gone is the threat of global nuclear annihilation, and in its place we have smaller, more specific threats. In real life, that’s twice as terrifying. In a blockbuster like Iron Man 3, it’s half as exciting. But IM3 does away with a generic villain from the Middle East5 and replaces him with, basically, Chinese Osama bin Laden…played by Sir Ben Kingsley. It’s real enough to lose some of that generic-terrorist dullness and even scare you a bit.

And dudes, the dudes in this movie are so good! Going in, you know that your pants are going to be charmed straight off your legs by Robert Downey, Jr., but after you’re hit with a bunch of Guy Pearce and a little bit of Sir Ben Kingsley, you probably won’t even own pants anymore. Pearce is awesome, as usual, but Sir Ben Kingsley really steals the show. I’m not sure who’s idea it was to cast him (probably John Favreau (Vegas, baby! VEGAS!)), but Sir Ben Kingsley is the best thing going for IM3.

It’s the acting–Sir Ben Kingsley yes, but also Pearce, Favreau, Don Cheadle, and of course RDJ–that’s sustaining this franchise. Sure the suit is cool and all–IM3 features an all-new “prehensile” suit–but I’m buying a ticket to spend some quality time with RDJ. The movie’s writers know this, thankfully, and they keep Tony Stark out of the Iron Man suit and cracking wise for the majority of the film. Which is exactly what I want to watch. Heck, I’d watch the guy order Chinese takeout.

I’m not sure how much longer we’ve got with Robert Downey, Jr. playing Tony Stark. Maybe one more film, maybe ten more? As long as they’re trending away from action laden superhero movies towards a Robert Downey, Jr. reality show, I say the more the merrier!

Ben Kingsley. Robert Downey, Jr. That should be enough to motivate you.

You wouldn’t be missing much if you just watched the original Iron Man instead.