InLight will brighten the Canal and Floodwall this fall This year’s InLight will take place on November 8th and will stretch from the turning basin at 14th and Dock streets down the Canal Walk to the floodwall at 17th Street.1 Now in its sixth year, the annual event put on by 1708 Gallery will feature at least 23 local and national artists, with their light-based art installations placed along one of Richmond’s most historical settings.

“[It] makes it a pretty interesting place to put contemporary art,” said 1708 Gallery’s executive director, Emily Smith. In addition to the canal, the sight is adjacent to CSX railroad tracks, trestles, and highway underpasses. Smith said the “diversity of surfaces” will make the one-night-only outdoor art gallery very “textured and layered.” In addition to the sights, the noise of traffic in the Bottom and on above highways will add depth to the visuals. 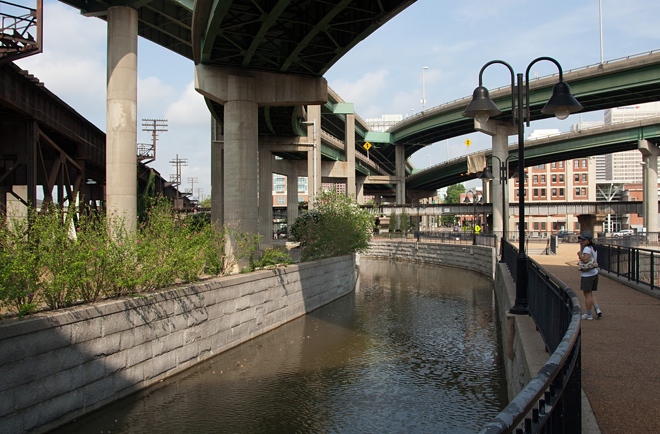 Photo of the Canal Walk by Perry Quan

This year’s juror is Ken Farmer, co-founder and creative director for Nuit Blanche in New York City, which produces the annual Bring to Light festival. Smith said that Farmer and 1708 Gallery have been working with artists to hone their installations, “maximizing what we think they’re capable of doing.”

Back in December, 1708 Gallery was awarded a $20,000 grant from the National Endowment for the Arts (NEA). Smith said that the NEA grant will go toward three or four special projects, one of which will include an electric piano that, when played, will illuminate lights installed in the canal. Smith said that the special projects are “almost always the most popular ones” at InLight, in part because some warrant audience participation.

Estimates place last year’s InLight attendance at roughly 5,000. To increase that number this year, 1708 Gallery will use additional grant money to advertise the upcoming event in media outlets across the state.

InLight will begin at 7:30 PM on November 8th with a community lantern parade. 1708 Gallery will organize a series of free lantern-making workshops throughout the fall, allowing Richmonders to participate in the parade.