This past weekend, the Greater Richmond Convention Center (or at least Ballroom C) was filled to brimming with tattooers, enthusiasts, and the cicada-like thrum of hundreds of tattoo machines working their ways across yards and yards of skin. For three days this past weekend, Richmond looked largely the same: beards on those who can grow them and some on those who can’t, intentional outfits across the spectrum of studiously shabby to working-class dapper, and tattoos. But some of those beards and tattoos were foreign beards and tattoos, having traveled from all over the country to be here in Richmond for the 21st Annual Richmond Tattoo Arts Festival. Over the course of the weekend, the Greater Richmond Convention Center (or at least Ballroom C) was filled to brimming with tattooers, enthusiasts, at least one stoked three-year-old (mine), and the cicada-like thrum of hundreds of tattoo machines working their ways across yards and yards of skin.

1. Richmond is one of the most heavily tattooed cities in America (something like 3rd, or 5th, or 1st, depending on whom you ask) as determined by its number of tattoo shops per capita.

2. The Richmond Tattoo Arts Festival just finished its 21st year, making it one of the longest continuously running conventions (some say the longest) of its type.

3. Despite its age, it is on the small-to-medium side of the tattoo convention size chart.

5. Despite it being older and smaller, the Richmond show is known for attracting some of the most respected and talented tattooers currently working.

6. Tattooed people who are in shape will remove as much clothing as possible to get tattooed, no matter where on their crackling physiques or how small the tattoo. I observed one dude who had to remove his shirt to get a fistful of butterfly zapped on to his ankle.

In the weeks leading up to the convention, I contacted a number of artists, both local and out-of-state, to see if they would help me navigate the event. Local wunderkind Josh Stephens from Richmond’s Hold It Down shop (full disclosure: he has tattooed both myself and my wife) was kind enough to point me towards some visiting shops and artists, as well as chat with me for a spell. He also let me hang around in the shop’s booth to observe and ask awkward questions of some of his clients like “So, what are you wearing?,” and “Do your folks know you’re here?”

Josh, along with the other folks at Hold It Down, reserved his time at the convention for out-of-town walk-up clients exclusively. I was told by another artist that conventions can often be compared to a tattoo “strip mall,” with people impulse shopping or merely collecting stickers, buttons, or (incongruous) candy. Josh explained, and this was reiterated by each of the tattooers I spoke with, that the real beauty and strength of the convention scene is to connect enthusiasts to artists they might otherwise never have the opportunity to work with. Hold It Down is part of a new breed of shop that is really using the infinite breadth and speed of digital word-of-mouth; at the time of the writing, Josh is floating upwards of 21,000 Instagram followers (@joshstephenstattoos). In order to be fair to those folks who traveled to get work from him, he “banned” locals from getting tattoos at the show.

As example, I met a young couple who travelled from Brooklyn and Philadelphia for the day primarily to get tattooed by him. I spoke with another dude who came up from Charlotte to get work from Josh and other artists from around the country, simply because he would never be able to afford the amount of travel and time it would require to get to all the different shops.

Tattooers and shop managers throughout the convention stated the past few years have really changed the way they operate. Where once an artist had to rely solely on their book in the shop paired with spoken reputation, they now have the power of social networking and smart phones to capture quick and easily disseminated images. This is not to say artists such as Josh are undeserving of such large followings, but rather the connectivity offered by the internet allows artists to reach audiences previously only dreamed of, or perhaps never imagined.

While Facebook and Instagram have changed the way artists and enthusiasts are turned on to new work, I was also told by more than one tattooer that the rise in popular reality television shows like Miami Ink, its spin-offs, and Ink Master have made the general population more educated (though not necessarily better educated) about tattooing. While this is, in some ways, a good thing, one artist told me that it has also made it more difficult as clients will have ideas they want to convey that may be impossible to pull off or simply aesthetically wrong. I witnessed more than one conversation between an artist and a client where the tattooer was desperately trying to explain why the client’s concept would a) be hideous and b) require far more time and money to capture than the customer was willing to give. 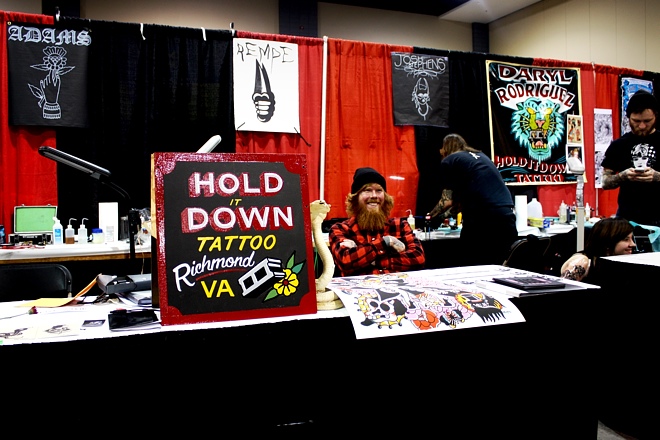 Several weeks before the convention, I learned that Ray Wallace (@flawless_wallace), from Austin would be in attendance. He was kind enough to make some room for me to get tattooed and spend some time with me discussing tattoo culture, the convention scene, and what he is interested in as a tattooer.

While sitting through a long tattoo of Moby Dick, he explained that he has mixed feelings about conventions, primarily because of the travel and expenses they require. At a good convention, he hopes to break even. But having apprenticed in Northern Virginia and worked in and around Richmond, Fredericksburg, and Manassas, he had a lot of friends who wanted to catch up and get work. Ray’s tattoos are fairly distinctive in their use of color. Typically only using primary colors, he mixes all of his inks as he tattoos, composing from a palette influenced by artworks from Bali and other parts of Asia where he spent a lot of his childhood. Mixing this Eastern influence with American Traditional techniques, he makes tattoos that can only be recognized as his. What’s more, he seems to genuinely love what he does (a trait I found in every tattooer I spoke with), so much so, he made me feel as if I were doing him a favor by getting tattooed.

Another artist I spent a fair amount of time with was Clark Snyder (@clarksnyder) who works out of Cathedral Tatooing Co. in Salt Lake City. Clark explained that he enjoys conventions, while admittedly only going to one or two a year, in order to catch up with friends he has in the tattoo world–both fellow artists and enthusiasts. While he made a hula dancer amble about my arm, he talked about the joy of getting to do what he loves every day, draw, while enriching people’s lives. Generally speaking, folks don’t get tattooed because they have to, but because they want to.

On the final day of the convention, I took my three-year-old daughter for a couple of hours to see the artists at work, either sketching for an upcoming tattoo, drawing flash, or at work tattooing on some body part. She seemed genuinely enthused and not at all frightened about the noise or sometimes “spooky” imagery. She introduced herself to strangers, showed them her drawings, and rejected theirs. In general, the artists spoke very kindly with her, and she pointed to the drawings and tattoos she liked and told them why: “that’s a pretty flower,” “that’s a skeleton acting crazy!,” or “that clown looks sad” (it did have a gun to its head).

If a three-year old whose ideas about art are limited to her picture books, cartoons, and chalk self-portraits, can find joy in a place that just twenty or thirty years ago most people would think was only visited by criminals, bikers, or sailors, then I think there’s probably something greater than just drawing going on. After all, it’s not going anywhere. 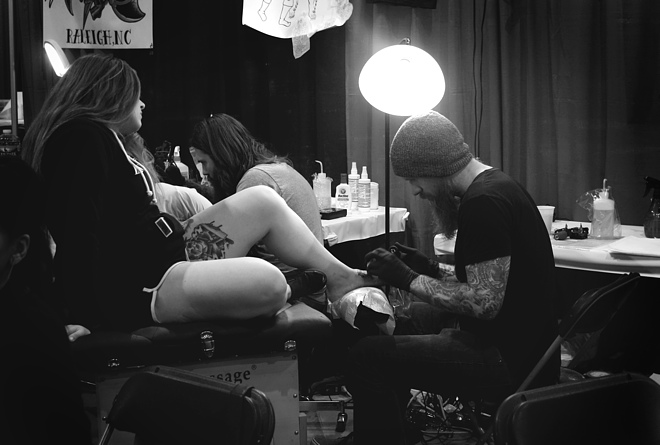