Habibi: one of the year’s best graphic novels

The long-awaited follow-up to one of comics’ most beloved stories takes place within a Middle East setting. Following the harrowing lives of two slaves, this 600+ page graphic novel will dazzle the eyes and pluck the strings of your heart.

Craig Thompson’s new book Habibi is an incredibly moving and beautifully-told 600 page masterpiece about two escaped slaves struggling to survive in a Middle East fairytale world ripped more from Scheherazade than the headlines. It’s a love story. One of the great things here is that it’s every kind of love story, as the dynamic between the two main characters, Dodola and Zam, changes from mother/son to something vastly more complicated. But Habibi is one of those books where just telling you what it’s about doesn’t really tell you anything, because it’s also about language and storytelling and survival and, I don’t know, the horrible things that people with power do to the people without it. Oh, and there’s a lot of sex, too.

But let’s dip back for a quick second because I can’t tell you about Habibi without first telling you about Thompson’s last book, Blankets. When Blankets came out in 2003, everyone flipped for it. It sold a bazillion copies, scored mentions in cool music magazines, and everyone pretty much regarded it as a major work that was going to be instrumental in finally getting comics and graphic novels mainstream. Blankets had everything an indie comic was supposed to have: misunderstood teens with artistic temperaments, forbidden love, strict religious upbringings, unrequited love, love conquering all, love lost, and a scene at the end where it’s all okay because that’s what it takes to be an artist. It’s a Death Cab For Cutie song in book form. It’s also a lot like that scene towards the end of the first Transformers movie where Megan Fox says something to Shia LaBeouf like “My life has been difficult in ways that yours has not, so don’t judge me.” He looks at her like he’s seeing her in a new light–and I started crying in the theater. 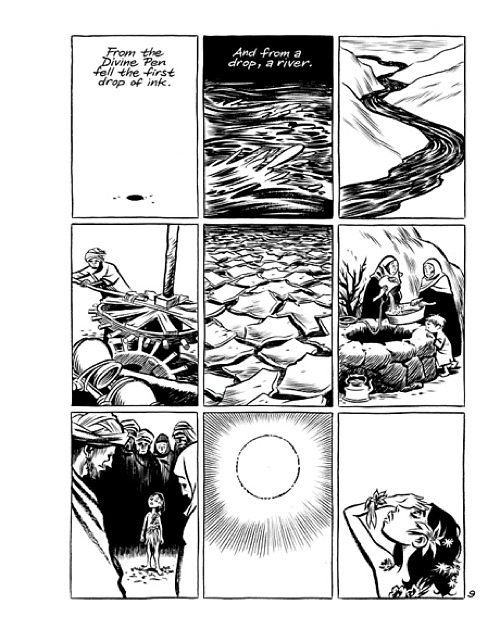 This may be the point where some of you are tempted to no longer trust my judgment.

Upon further analysis, I realized that the reason I cried during Transformers wasn’t because I actually cared about the characters or about what was happening in the moviel: it was because Michael Bay is amazingly good at manipulating the emotions of his viewers. Watch that movie again (if you dare!) and you’ll see…the music is just right, the lighting is just right, the pacing is just right, and BLAMMO! Somehow you’ve forgotten that what you’re watching is stupid garbage, that Megan’s line is basically a non sequitur, and you respond as if real people are actually exhibiting real emotions in which you yourself are invested.

It’s a great trick, and there’s real pleasure to be derived from being on the receiving end of it. Craig Thompson is really good at it too. Look back up there at all that’s in Blankets and tell me I’m wrong. You get all those things together on the page, swirl that ink around so that the delicate teenage boy looks sad and the beautiful teenage girl looks like she needs someone to fix her and…well, it would be hard not to sell some books. 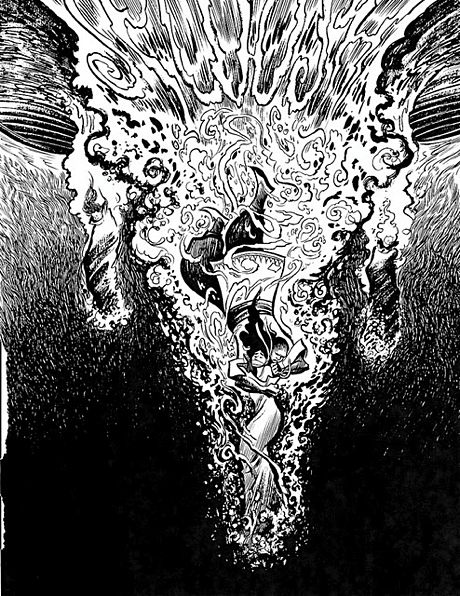 After Blankets  you’d be forgiven for thinking that Thompson wasn’t any more than a master manipulator with some serious illustration chops and a maudlin streak. Habibi will change your mind.

Thompson makes a good third of the other illustrators out there look like total chumps. Each page is carefully designed with recurring motifs–that draw from sources like the Qur’an and other storytelling traditions–to add multiple layers of meaning to every moment. Scenes of city life and vast endless oceans of sand are drawn with such attention to detail that you’ll be staggered imagining a human being crafting the images with human hands and commonly available tools.

Dodola and Zam encounter what seems like hundreds of characters and endure dozens of plot twists, and while circumstance might sometimes bring them low, Thompson never loses sight of their humanity, never strips them of their dignity. Because of this you’ll find yourself gasping at their failures and cheering for them in their victories. It’s a story told with technical precision and real, honest-to-gosh passion, and if you cry at the end it won’t be because you’ve been successfully manipulated–it’ll be because this world and these characters have come to mean something to you, and you’ll miss them once you reach the final page.