GWAR, Me, and the Onrushing Grip of Death: Part 35

Nobody knew much about “the gay cancer” and neither did I. All I knew is that it took a long time to kill you, and I was sure that modern medicine would figure it out before it got my brother Andrew. I couldn’t have been more wrong.

I pissed off a bunch of people last time with my potty-mouthed commentary and I even retracted the original title because a certain person that it was about thought that it sucked because her friend called her up and said it did. Well, I am not trying to embarrass or belittle any of my GWAR-brethren, just get cheap laughs at the expense of others … especially me. So I called the affronted super-chick and asked exactly what was wrong (knowing full well what was) and was more than a little offended myself when I discovered that she hadn’t even read it herself! Not because she hadn’t had the chance to check out the facts firsthand before she started blowing me up with hysterical texts, but because she hadn’t been hanging on my every word since episode one!

Look, nothing in this thing is anything but TRUE (except the stuff I make up), but I do recognize that some off this stuff could be embarrassing and inflammatory — shit, I hope it is, that’s the reason that people read it! But I’m not out to win any popularity contests, and I’m certainly not getting rich here, I mean, why start now? So why the hell am I doing this? Why the hell do I do anything? I suppose I am doing this for a lot of reasons but by far the biggest: to remember all the stupid shit we used to get up to and laugh about it because it’s fucking funny. If that pisses you off don’t read it. But perhaps you can take comfort in one thing — nobody is going to look stupider than me. Especially around Episode 68!

But I don’t think anybody is going to be mad at me over this one. So let’s get on with the episode I have been dreading writing about ever since I started this thing.

GWAR, Me, and the On-rushing Grip of Death: Chapter 35 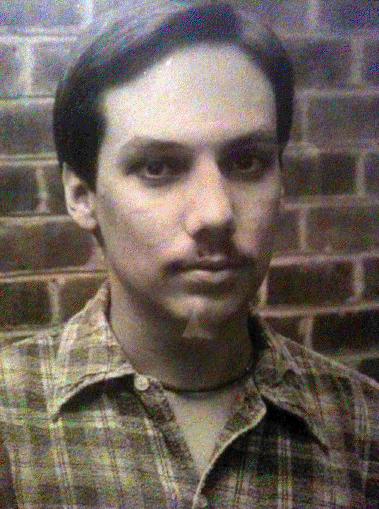 “I Get Gang- Raped in the City Jail”

Say hello to my brother, Andrew Murray Brockie. I think it was taken when he was 16 or 17 (yes, he was always overtly hairy), and you can tell by the brick wall background that it was at Robinson High on one of the few days that Andrew actually went to school. Openly gay, he had a really tough time of it at the learning-coliseum and eventually stopped going altogether. It was a real loss for the world that my brother couldn’t find a way to contribute to it other than by blowing load in anonymous men’s beards in one of the many bathhouses where gay people had engaged in all kinds of anonymous sex until AIDS put the kibosh on the whole party. He was so smart that he scored near-perfect on the SAT, good enough to get him in the “Who’s Who of American Students” even though he failed to graduate.

Andrew contracted HIV around 1983. Nobody knew much about “the gay cancer” and neither did I. All I knew is that it took a long time to kill you, and I was sure that modern medicine would figure it out before it got Andrew. I couldn’t have been more wrong.

If you have been following the twisted tale since the beginning, you know that I give Andrew a lot of credit for helping open up my tiny little mind (in that huge fucking head of mine) and getting me going in the right direction — that of a complete malcontent. He turned me on to bands like T.Rex and Iggy and the Stooges, and after that it was an easy hop to metal and punk. When I had been hanging around the D.C. punk scene, my brother’s house on Capitol Hill had been a rallying point for me and my friends. My brother and his crew of young gay D.C. professional types were always happy to see me and my combat-booted crew descend on their house and proceed to eat everything inside of it. My Mom knew that whenever I would disappear into the city Andrew would be there to keep an eye on me, as much as that was possible.

After I went off to school, Andrew blew his way through several unsuccessful relationships in various parts of the country. These invariably involved him and an older professional type who would gradually grow sick of each other and then part amidst an explosion of caterwauling and long distance requests for money. My Dad was getting close to retiring with his new wife, after settling with my Mom out-of-court, so he was less and less involved with the continuing saga of Andrew. As we were both adopted it was sometimes easy to feel that our Dad didn’t really consider us his children.

Two things happened that ended the “Andrew flitting-about-the-country-sucking-dude’s-dicks-and- having-them-ram-dicks-up-his-butt” period. First of all, his friends started dying. Over a period of four or five years basically everybody in Andrew’s D.C. social scene was dead. The exception was Tony, who was a caretaker at the Washington Cathedral. He had been offering me a tour of the place for years, but I always demurred due to an irrational fear that he would ask me to suck his dick — and that because he was always so nice to me I would be somehow obligated to do so. Tony was not getting sick, and neither was Andrew. Even though every single one of their friends had died, it still hadn’t really sunk in that my brother had a death-sentence hanging over his head. But then the second thing happened, and that, coupled with the growing number of funerals my brother was attending, finally ended Andy’s continent-spanning cock-fest.

So, he came home. In a weird way it was a good thing. My mom was getting older, moving into her sixties, and she was lonely. She was an old-world bride and a one man gal, and was going to remain true to my Dad even though she divorced him. She wasn’t about to be moving in a new boyfriend. Not that she had become a shut-in or didn’t still embrace life with passion. She had a job at a local law firm as a receptionist where her beautiful English accent earned her the affectionate nickname “The Voice”. And she had some good friends, but living in that big house all by herself must have been pretty lonely. I did my best to visit and be an attentive son, but when I look back now I see a tremendously selfish and insensitive lout who could have been a lot more helpful but was too busy being a churlishly self-absorbed dumbass. So when my brother came home it gave her something to live for, even if it was something as terrible as helping Andrew to die.

Wow! This column used to be hilarious! And it will be again, after my brother kicks off … but that’s not for a couple of years, which could be decades as far as this is concerned. Whatever happens one thing is certain: we will be back in two weeks!