GWAR, Me, and the On-rushing Grip of Death: Part 53

Oderus Urungus speaks out on Randy Blythe’s imprisonment, plus details on this summer’s GWAR-B-Q. 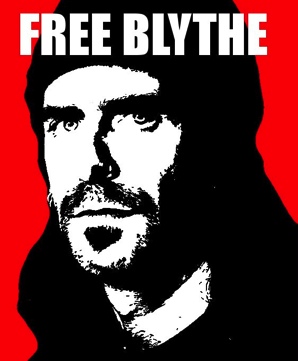 As I write this Lamb of God lead singer and escaped GWAR Slave, Randy Blythe, is still locked up in the Czech Republic. For those of us who wish to do whatever we can to assist and support Randy, be sure to attend the rally on August 31st at the Canal Club, hosted by yours truly, the beautiful-yet-brutal Evil Eve, and a host of awesome bands–all TBA. Proceeds will go to the Randy Blythe Defense Fund.

It truly is a tragedy that a young man lost his life in such a pointless manner, but to compound the misery with the unjust incarceration of Randy is vindictive as hell and reeks of vendetta and shakedown. The Czech Republic is a member of the EU and underwent a major overhaul of their judicial system eight years ago in order to get in. It’s just bizarre that the band was unaware of this situation, were invited to play a show in the country, and then were met at the airport by the local equivalent of SWAT–who were by all accounts less than cordial. Overkill and deception were the tools used to entrap Randy, and he has been locked up in what looks like a fucking medieval dungeon ever since.

To think that at any moment any member of any band could be arrested and charged with such a serious crime in the wake of what was obviously a terrible accident casts a long shadow across the lives of many people. The denial of Randy’s $200,000 bail has created a maddening situation for everyone that loves Randy, and the lives of his family members and bandmates have been plunged into chaos. It truly seems like the authorities have one king-sized boner for our homeboy, and it’s difficult to make any sense out of the matter–so Oderus is here to mouth off about it! 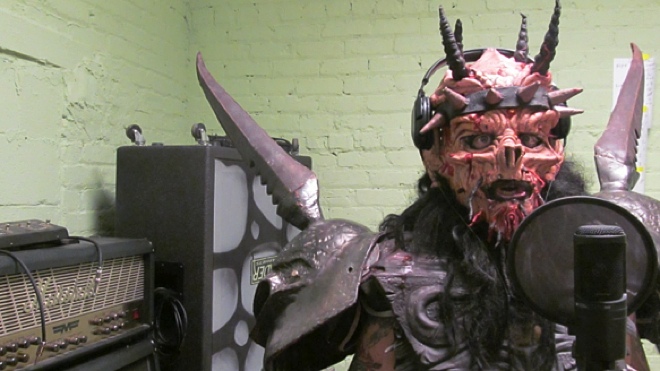 Oderus in slave pit studios, recording a Randy-rant for his weekly segment on “Full Metal Jackie”

“Hey kids, it’s Oderus, ready to mouth off about things we all hate, while filling your head with ideas of chaos and woe, hatred and horror…and tons of laughs! Now, to catch-up—here it is, mid-July, and Randy Blythe, escaped GWAR slave and lead singer of the metal band Lamb of God, is still languishing in a Czech prison where he is supposedly learning Mongolian from his cellmate. “Shaky Slave,” as he is referred to around the dungeon, was arrested before the band’s show in Prague on the charge of manslaughter. It is alleged that he somehow caused the death of a fan (who was, by all accounts, acting like a complete idiot) during a show in Prague two years ago. GWAR has taken an interest in Randy’s case–because nobody punishes one of our Slaves without GWAR’s permission!

First thing I did was go to Europe to try and bust him out of jail, but once I got there I found my way blocked by giant mounds of chocolate, delicious cheeses, and kegs of delicious beer all piled up on a road lined by bars full of legal weed and gorgeous hookers…I didn’t get any further.

So after failing in my first attempt to rescue this rascal, I am calling on the metal community to support Randy, in his hour of need…and I don’t care if you think he is a dick! He is one of my slaves and I want him back, so we must mobilize metalheads worldwide to demand these ridiculous charges against Randy be dropped. But how, Oderus? I don’t know! Get creative! Annoy your congressman with an endless string of emails and letters. Stand outside his office and yell at the building…or you can sign the poorly-drafted petition to President Obama demanding Randy’s release…hmmm what else? Oh, I just remembered! Most of the strippers in the US seem to come from the Czech Republic, so I don’t know…maybe don’t tip them so well?

However useless these actions may seem, there is a point and the point is this: ummm…oh yeah…the continuing detainment of Randy is unfair, unjust, uncool, and it’s up to us to voice our outrage in the loudest manner possible. And if there is one thing the metal community is good at it is making loud noises. And now that noise is…FREE RANDY BLYTHE!”

At that point Oderus received an important communiqué from Sleazy P. Martini, listened intently, and then stuck the headset up his butt. After getting the rest of the message via carrier pigeon, he continued:

“And don’t forget the sickest slaughterfest of the summer, on August 18th at Hadad’s Lake, the 2012 GWAR-B-Q–featuring GWAR, Strike Anywhere, The Casualties, GHOUL, Valient Thorr, and many, many more. Get all the latest at www.GWARBQ.com or on our Facebook page.”

Thanks Oderus. Can you take that axe out of my head now? You can leave the dick in my ass. Because it’s time for the lead-in to the latest episode of…

Episode 53: This is Another One of Those Episodes Where I Talk More About What is Happening Now Than What Was Happening Then 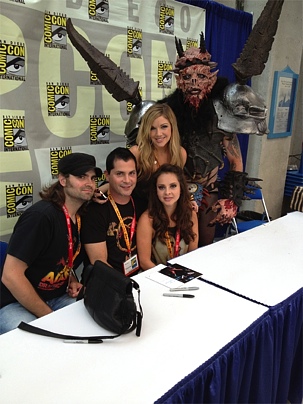 What is wrong with this picture? Beautiful, attractive, talented, Hollywood star-quality material, and a bunch of stinky humans. But seriously fucks, here’s Oderus with the cast of Holliston at San Diego Comic-Con 2012. The FEARnet horror-sitcom thingie was recently rewarded with a second season, and Oderus was there to blather on about it. Moments later, he was in a mop closet with his dick hanging out and a miniature cleaning lady inserted in his bunghole…

Holy shit. What a weekend.

It was both infinitely horrible and supremely satisfying, often at the same time. It all started about six months ago when we got offered a chance to play at a small festival in Guelph, Canada that just happened to be the same weekend I was flying out to the San Diego Comic Con to do a bunch of promo for my FEARnet show, Holliston. I had a feeling it was trying to do too much, but ended up caving to pressure. All that would be required of me would be flying thousands of miles with a million-pound costume bag in tow; getting dressed in various mop closets; having to get back into street clothes and cleaned of GWAR-goo in the aforementioned mop-closets for various meetings, parties, and photo shoots; then somehow catching a 6:30 AM flight back to Guelph, Canada for a show with RAWG (the world’s only non-costume GWAR tribute band); and then somehow talking my way back into the USA despite the fact that I had my lost resident alien card and had been trying to replace it for the last three years!

Everything was going splendidly as I bathed in the gurgling, geeked-out grandeur of what is the world’s biggest nerd-fest. Highlights included a great panel with my Holliston castmates (minus Dee Snider, who had a previous engagement squeezing the pus out of Donald Trump’s infected goiter), hanging out with the lovely “Miss Katonic” to help her promote her new comic series (which features guest stars GWAR doing a variety of nasty things), and running into my old buddy Jason Miller, former singer of the band Godhead. He’s brilliantly transformed himself from a creepy-yet-polite goth rocker, whose band used to open for Marilyn Manson (we called him “Niceferatu”), into a kind of “dark country” singer. Basically he just put on a cowboy hat and boots and laid off the corpse paint and eye-liner. He was always a talented motherfucker, and apparently his new style is working well–well enough to get him on a Randy Travis tour (whoever that is). He’s also making money doing voice over work, and is featured as one of the bosses in the new Warcraft video game. In short, he’s making way more money than me and working way less. Damn him!

Everything was going well. I had finished all of my Con duties and was ready to catch an early-AM flight when suddenly I woke up in my hotel room projectile-vomiting a hideous combo of Jägerbombs and half-digested crab cakes. Stricken with the worst case of food-poisoning I’ve ever had, I stumbled about the room, arms flailing, chunks flying, desperately trying to locate the bathroom light-switch as I continued to coat the walls and furnishings with stinking swaths of reeking tummy-goo.

Plunged into an abyss of suffering, I realized with horror that I had a plane to catch. Dragging myself and my bulging costume bag to the lobby, I somehow managed to make it to the airport only to discover my flight had left an hour ago. World spinning, I drop my new Kindle Fire, cracking the screen. What followed was an all-day odyssey of rebooked flights and barely-made connections which somehow led to my still-heaving form being delivered directly to the stage in Guelph–just in time to make the set…and somehow manage to deliver a good one. Mission accomplished…or so I thought. Because when we finally got home on Sunday night a final surprise awaited me. The airline had no idea where my luggage was, and I’m not talking about some socks and toiletries, I’m talking about my entire Oderus costume. As I write this, I know that somewhere out there in this vast world Oderus lurks inside an oversized hockey bag ready to animate and strangle the life out of whatever baggage handler was responsible for this colossal fuckup. Maybe if the bag hadn’t been crusted in puke they might have taken better care of it.

In two weeks—the chapter I meant to write this week!