It’s back! GWAR, Me, and the On-rushing Grip of Death continues down GWAR’s memory lane. In this episode GWAR’s offered a record contract from Road Runner, but are they interested? Plus details on this year’s GWAR-B-Q

I’m finally getting back to battlespeed after some well-spent time off–well spent lolling on my couch, sitting on the porch, and then retiring to my bedchamber after an exhausting day. Occasionally I would rise from my torpor, fire off a few nasty tweets, and then go back to sleep. But were we completely idle? HELL YES I was, while other people did all the work. And when I finally reappeared from behind a pile of garbage, amidst an explosion of smelly socks and dusted rocks, they told me about THIS! Check out the latest dispatch from the bowels of the Slave Pit, your source of underground debauchery for over 25 years! 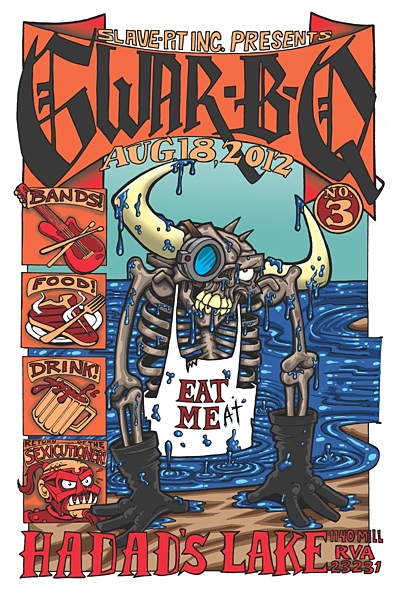 After months of paperwork, hoop-jumping, and making the appropriate sacrifices, today the Slave Pit is pleased to announce that the GWAR-B-Q is 100% completely legal, confirmed, and set for August 18th at Hadad’s Lake–the location we had planned on using last year. As you may recall, last year’s GWAR-B-Q was switched from Hadad’s to the National Theater because of problems getting the correct permits. Even though the event was still completely awesome most people seemed to agree that, generally speaking, GWAR-B-Q’s should be held outdoors.

“All the proper arrangements have been made in triplicate and the proper demonic sponsorships attained,” said GWAR spokes-thing Oderus Urungus. “It’s going to be a stinking hot, beer, and beef-smeared metallic murderfest of unprecedented debauchery…the most splat-tac-cular GWAR-B-Q!”

This marks the third consecutive year for the growing festival, and like last year, GWAR will headline the event. As Best Friends Day, the hugely popular Richmond music fest, is taking this summer off, the GWAR-B-Q is set to be the hugest heavy music event of the Richmond summer scene. Bands will be spread across two stages and feature such acts as The Casualties, GHOUL, Valient Thorr, Occultist, Lionize, Highness, Antietam 1862, MUTWAWA, and Black Naked Wings.

There will also be Spew-O-Lympics, numerous food vendors, endless streams of golden nectar, pools to cool your fevered sunburn, and much much more, including the return of the Sexecutioner to the GWAR stage for the first time in twelve years. Sexy has completed a lengthy sabbatical beneath the catacombs of Paris with his good friend, Prince Ray Pierre, better known as “Frenchy” the demon of France. His return to the rock stage provides the promise of attaining unprecedented levels of naughtiness.

Some of the proceeds from the event will go to benefit Richmond’s Ring Dog Rescue.

And there you have it! So let’s get back to the real reason I am here…and bust into the latest installment of…

Episode 51 (cont.): “The Last One Just Kinda Stopped and Didn’t Tell the Whole Story So We Are Not Going to Give This One a Name”

But Wild Bill and Jiz were not the only professionals that were interested in GWAR. As my contact list grew, more and more people who worked at record companies were appearing on it. The deal with “Shitty-dick”,1 was a one-off, which meant we could do whatever we wanted with the next album. The songs that would lead to Scumdogs of the Universe were beginning to take shape in the dungeon of the Slave Pit (actually it was a walk-up) and we began to think about a new musical home for our band.

We were as surprised as anyone at the buzz we had going but needed to follow it up with a strong showing ASAP. We felt more confident about our line-up and abilities so we went into writing the record in a completely different way than we did Hell-O. Hell-O had been our documentation of the first few years of the art school metal band GWAR and reflected the looseness of the concept and the different ideas of the many musicians who had passed through the band in the “dim time.”

Scumdogs was designed to be more challenging for us as musicians. We realized that this beast we had created had a lot more life to it than we thought but was in danger of being dismissed as joke unless we did something about it. Metal had become extremely horrible for a while, with glam bands being the most nauseating symptom of just how awful it had gotten. Luckily this phase of metal didn’t last too long, though its impact is undeniable. In fact, it’s common knowledge that glam-rockers overuse of hair spray burned a hole in the ozone, hastening GWAR’s birth unto this world. At least they were good for something!

This period of mediocrity was chafing to many in the metal scene, but truth be told, it’s hard to hate a glam-rocker for long. I mean, they really put a lot effort into how they look, and there is a certain amount of pride there that is admirable. But I still want to knee them in the crotch.

For me, it had been all about the hardcore ever since I had experienced my first slam pit at one of the first Minor Threat shows in 1980 or so. Maybe it was the furious pace of the music that drove its evolution, and within a couple of years of hardcore’s inception there was speed-core and metal-core and thrash-core and surf-core until finally it started to become bore-core. So in a sense the same discontent that was filling the metal scene with a glossy malaise was also driving the hardcore scene into new places. Metal bands like Slayer, Celtic Frost, and Metallica were beginning their rise, and in the hardcore scene, Black Flag was twisting their entire being and changing what hardcore and punk was all about. The arrival of punk rock had changed everything. The entire world of rock and roll had been reborn, and the fertile loam that was the lead-up to the end of the century beckoned to us with the promise of unknown delight and high adventure.

Our second album was our chance to stake our claim in this new country, and we set about writing it amidst the blood-red walls of the Slave Pit, at the corner Laurel and Broad.

But we didn’t feel like we wanted to sign a multi-album contract just yet. We felt strongly that if we put out a strong musical effort and had a successful US tour to support it we would be in a much better position to negotiate. I already had my first contact with “the industry:” on our swing through L.A. Finch had introduced me to her friend, Mr. Chinese Chicken, named so because his lisp made it very hard for him to say “Chinese Chicken Salad.” Because the main thing that labels do is take you out to eat, we would always get him to take us to Chinese places and make him order that for us. Chinese Chicken worked for Enigma Records and had produced some big albums, including one of WASP’s good ones.2 He made us our first offer, a three-record deal for a modest amount of money. We politely demurred, though the wheels were in motion to bring in Chinese Chicken (also known as Ron Goudie) as producer on our next album.

Right around then I got a call from Road Runner. They, along with Metal Blade, were my favorite metal labels, so I was all ears. I got on the horn with the Big Guy, and he invited me up to New York to see the offices in Manhattan and grab some lunch. Before we hung up, the Big Guy let me know they were very interested in signing us to a multi-album deal. In return I told him we were very excited about the offer, but we were looking for a more one-off kinda thing to build the band some more before we made such a commitment. We decided to continue the conversation in New York, and before you knew it I was winging my way to New York, cabbing across town, and sitting down to lunch in a swanky Midtown eatery.

We had a pleasant feed where I managed to chug five beers before we adjourned to the Big Guy’s very impressive facility. Occupying about half a floor of a skyscraper in New York, his office had a 50th floor view–considerably different than the racial-beatings I witnessed nightly. As his assistant brought coffee, we had the same conversation we had on the phone earlier. Then we had it again. For some reason the Big Guy didn’t seem to understand what I was saying. We only wanted to do a one-off, just one record in order to build the band and test the waters.

“But here’s the contract…” he said, producing one from his desk. I believe it was for seven records.

At this point the Big Guy called his assistant back into the office. We had the same conversation again, this time in front of the assistant. Still I was un-moved. I think we did this for like another twenty minutes or so. Finally it started to sink in. I wasn’t going to sign the contract, though I did promise to read it when I got home. The Big Guy excused himself, and I went back home to tell the guys.

A couple of days later I got a call from the Big Guys assistant to see if I had changed my mind about the deal. I said no and never heard from them again.

Well, that was kind of anti-climactic! At least I got this thing up and running again. Let’s see if I am really back or if this is just another one of my half-assed attempts…we will know in two weeks!