GWAR, Me, and the On-rushing Grip of Death: Part 44

In the latest episode of our ongoing foray into the mind and history of our GWAR frontman, we take a more sentimental, yet unsettling, turn into a brother’s struggle with AIDS. How did our GWAR superhero deal with such tragic news, and can something inappropriate be…appropriate after all???

I was looking at the episodes and their little preambles when I noticed that the word “heartfelt”had been used not once but TWICE in reference to this series. That will never do! So I thought I would do an episode where I undoubtedly came off as an asshole. Here goes… 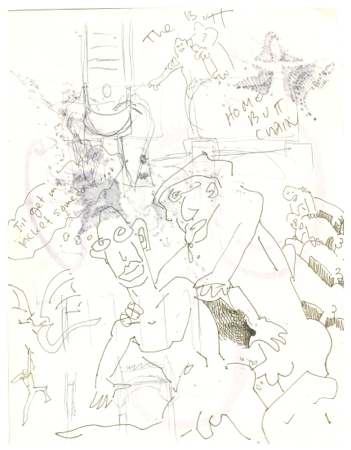 “Homo Butt Chain” was more than a jumble of confusing lines in my sketchbook…it was also a song in one of my ever-present side projects, this one being the band Milk. We were pretty good until I wrote this song, which pissed off the bass player so much that he quit the band. And seeing as he owned most of our gear, we were done. Oh well…no use crying over spilt milk! Ha ha! Get it? Here are the lyrics to the last part of the song (I can’t remember the first part).

No!
No more Homo Butt Chain
You’ll get A-A-A-A-A-AIDS x 2
No! No more homo-butt chain

You’re lying there in the hospital bed
Your mind has turned to muck, and jello fills your head
Your eyes are getting cloudy and your life is sinking slow
The people making rubbers are raking in the dough!
Ain’t gotta be gay and there ain’t no cure
Soon to the top-five killer in the world
And you know things are getting drastic
Can’t get laid without a piece of plastic

— “Homo Butt Chain” 1986 (yeah the timeline is way fucked on this one, we go backwards two years and then forward three!)

Pretty sick, huh? And it’s even sicker that I wrote this at the time my brother was entering the fifth year of his battle with AIDS. That’s what pissed off Jazzbo so much, or what he claimed pissed him off so much…that I would write such an appalling song with seemingly no regard or sympathy for anyone suffering from the disease…not even my own brother. Truth is, the impending death of my brother hadn’t really sunk into me at that point, and my sick humor was my way of dealing with it. I took a gleeful delight in discomforting others, and no joke was beneath me. My brother wasn’t going to die, even if by that point half his friends had died. My Mom wasn’t going to die either. Home was there, forever…but somewhere inside me I guess I knew that change was coming soon.

AIDS wasn’t at all like it is now—that is as long as it’s AIDS in a country where medicine is ample. AIDS in Africa is fucking awful, but because Magic Johnson is OK, nobody in the U.S. gives a shit. Back then AIDS was a death sentence.

One visit Andrew would look fine, the next he would be bed-ridden, pale, and thin. I would bring him pot, which helped with his appetite. But sometimes these episodes would be so serious that he would have to go into the hospital for days or even weeks to fight off whatever common cold or skin virus was ravaging him. Like shingles, a horrid discomfort that would turn large sections of his skin into painful lesions. So painful he couldn’t lie on his back. Or a sore throat that rapidly swelled up to the point where he couldn’t breath. But one thing was sure, my brother made sure he had good drugs, and towards the end was pumping morphine and diluted straight into his catheter. Thank god for opium, just try not to fuck with it until you are pretty sure you are going to die. For Andrew, it was still a ways off.  But I could feel it coming.

He still had good times in him, and would meet us at our shows in the old 9:30 Club. It was a sweet victory to be headlining at the same club that not long ago had banned us. We had a hotel in Chinatown and Bones fucked Andrew’s nurse, who he nicknamed “Blood Bags.” Andrew loved the show, was proud of his little brother, and Mom was waiting at home with the dog, Higgins. Moms or pets don’t get code names, and we were still a family.

THE SAD AND TRAGIC TALE OF LEE BEATO

Before we found Cro-Mag, but after we got Dirty D, we went through a brief period where we tried out a few different area drummers. One guy that had a good rep was this kid LEE BEATO (that’s his code name anyway, you know how that goes…). He was rumored to have a “huge kit,” and was supposedly an accomplished metal drummer. Then we heard that this kid was a bit high strung…and had some problems in college that led to a nervous breakdown…but he was “much better” now, and his audition was awesome. Plus he had this girl with him that was supposedly “taking care” of him, but wasn’t fucking him, so I fucked her. He had one of those huge Neil Peart kits that all metal bands had to have, and had long heavy-metal hair…and seemed normal enough. He didn’t talk much, even when addressed directly, but that was actually refreshing considering the general level of conversation around the place. But his entry seemed too seamless, so we decided that the best thing to do with our maybe-crazy new drummer was to devise and execute a brutal hazing ritual, one that was pretty much all my idea. We (I) overcame any hesitation Lee might have felt by insisting that this was a time-honored part of joining GWAR, when in actuality we had never done anything like this.

We met Lee at the appointed spot and immediately blindfolded and duct-taped him inside a large canvas sack, then spun him around a bunch and pushed him into the back of a van. We then took off and treated Lee to a hellish, jolting ride up and down the alleys of the Fan, one in which his struggling body was thrown about the back cab like a rag doll. After no less than a half an hour of this we dumped him out in the middle of a parking lot, where we released his bonds and drove the van away, leaving him to squirm free. At that point, from the far edge of the parking lot, I began running towards him at full speed, screaming all the way, right up until I stopped about half a foot from his contorted face with a final vocal blow. Lee stood his ground, and seemed strangely unaffected by the whole ritual, and the heavy drinking that ensued. What we thought was good-natured tolerance was actually the last remnants of his mind retreating to some dark place deep inside of him. But if there was any hope for Lee Beato retaining his new job or even having a shot at the rest of his life, the next atrocity we heaped upon him put an end to such aspirations.

It happened on a trip up to New York. We had to meet our lawyers or some such shit, and had a show in Baltimore (the timeline is really fucked as this takes place after Rotundra became our manager yet before we added Bam-Bam – remember I reserve the right to change the code-names anytime). After this episode we are getting it straight again! But anyway, it was set to be Lee Beato’s first show. We had a new costume for him that Techno had built (kinda a gargoyle theme, he even had little wings), and practice’s were sounding good. So we went up to New York and checked into a hotel. We were about to go to the meeting when we noticed Lee sitting on the bed, staring at the wall. Rotundra mumbled something about him not feeling well, and offered to stay behind and look after him. Thinking nothing of it, we went off to whatever it is we were doing that day, and returned a couple of hours later to pick up Rotundra and get on to the next meeting. When we got in the room we saw Lee sitting in the exact _same_ position he was when we had left, his hair mussed-up and his clothing in disarray, his eyes glassy and wide as drool dripped off his chin. He wasn’t going anywhere. Rotundra bee-lined out the door, completely ecstatic, and high-fived me in the elevator.

“I got some!” she exclaimed.

The next day we drove to Baltimore and loaded in to the show. Lee sat backstage for the duration of the day and continued to not utter a word. Noticing that his drums remained packed, I went backstage and found Lee Beato rolled into a fetal ball, murmuring softly to himself. Any attempt at getting him to assay his responsibilities was met with more drooling, and soon it became obvious that Lee had lost it. Attempts to get him to snap out of it proved useless, until finally he uttered…

We had to cancel the show and drove home that night. We never saw Lee again after that. I heard he was doing well.

Next week! We get the timeline sorted out at last and power on into the last half of 1989 and GWAR’s first coast-to-coast tour! See ya in two weeks, more or less, for…