Gravity: Face a silent death in space for just a fraction of the cost

An intimate story of personal survival set on the coldest and largest stage imaginable. It’s both beautiful and terrifying. Floating off into the infinite blackness of space, to asphyxiate or freeze to death, is one of my top ten fears.1 It’s more than just the fear of the sheer vastness of space, it’s also how relentlessly slow (and maybe even calm?) a floaty spacedeath would be.2 The thought makes my stomach drop and my insides turn cold, but it’s kind of a neat feeling–especially when I can experience it from a theatre and not an inhospitable vacuum.

No matter how you spin it, space is a terrifying yet beautiful place. Gravity lets you know that too, right up front, with stark white text overlaid on a black background:

Life in space is impossible

Not too subtle. Then, immediately, the film cuts to a silent shot of earth as viewed from orbit. It’s breathtaking, mind blowing, awesome, and, best of all, real. Terrifying and beautiful, guys! 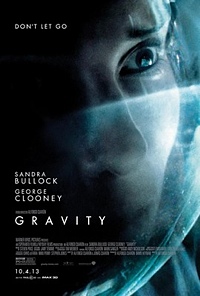 A distant speck floating above the earth reveals itself to be the Space Shuttle, the Hubble Telescope, and three tiny astronauts. Matt Kowalski (George Clooney) zips around the Shuttle untethered (terrifying) using a thruster pack while Dr. Ryan Stone (Sandra Bullock) works on Hubble repairs as continents, oceans, and clouds spin beneath her (beautiful).

Kowalski’s a wise-cracking space veteran, the type of role that Clooney’s pretty familiar with (think more Ocean’s Eleven less Solaris). Sandra Bullock, on the other hand, plays an outer space neophyte that’s way more comfortable stuck in a lab on terra firma than attached to the end of Canadarm. But she’s a professional and manages to keep her cool (and her lunch) while working through a set of commands provided over the radio by “Houston” (voiced by Ed Harris). Houston then informs the crew that, while attempting to deorbit one of their own satellites, the Russians3 have caused a “chain reaction” of exploding satellites that has sent a ever-widening debris field rocketing around the earth. When thousands of pieces of exploded satellites traveling at hundreds of miles per hour tear their way through the Space Shuttle, that’s when Gravity starts to get stressful.4 Cut off from the rest of humanity, Kowalski and Stone must survive on their own.

Director Alfonso Cuarón (Children of Men) does some amazing things throughout Gravity to balance the beauty and terror of space. Mostly he lets the thing speak for itself. As metal crushes and splinters and astronauts tumble by desperately grasping for purchase, the film will often pause to give you the most amazing look at Egypt or Mexico as they rotate silently below. He also changes the point of view throughout the film. Once slowly (and in a continuous shot5) coming into Stone’s helmet and shifting the point of view from third person to first. Once, as Stone and Kowalski drift through open space connected only by a thin tether, the camera begins with Kowalski, drifts down the tether, and settles on Stone. All of this lets you see that, yes, space and earth and the universe are beautiful! But, also, look how horrible it would be freeze to death6 as your space craft is silently torn to smithereens!

Bullock acts the shit out of this one with very few lines, conveying terror, loneliness, and wonder through her expressions and body language. It’s amazing work, and I wouldn’t be surprised if she lands her second Oscar nomination. Unfortunately, the script is the movies biggest liability and gets pretty cringey as it attempts to provide a totally unnecessary backstory for Dr. Stone. Gravity is about facing challenges and learning about yourself in the process–it’s a pretty powerful and universal theme. But it felt like Stone’s backstory was provided to make the movie about someone, when really it’s about all of us! Deep, I know.

But hey, if you don’t want to think about birth, rebirth, life, and the meaning of it all, you totally don’t have to! There are plenty of amazing visuals to occupy your mind–and really, that occupying should take place in a theatre with 3D glasses on. Gravity is the first movie since Life of Pi that I’ve seen use 3D in a meaningful way, a way that’s not just throwing crap at the screen to make you flinch. You’ll sit in wonder/terror for 90 minutes and eventually forget that your wearing 3D glasses at all.

It’s a beautiful experience and despite the script’s occasional weakness it’s definitely worth the price of admission.7

You’ve always wanted to drift, cold and alone, into the infinite vastness of space but could never find the time.

I guess if you had a heart condition you could theoretically have a stress-induced heart attack and die during this film.

There are four human characters in Gravity, one of which is a woman. So…no?