The first ever Girls Rock! RVA Camp kicked off its showcase last Friday at St. Andrews Church in Oregon Hill. Did the girls rock? Did they ever! They rocked at zinemaking, they rocked at creating posters, and of course they rocked at rocking out.

It was with this jubilant call-back chant that the first ever Girls Rock! RVA Camp kicked off its Friday showcase at St. Andrews Church in Oregon Hill. Did the girls rock? Did they ever! They rocked at zinemaking, they rocked at creating posters, and of course they rocked at rocking out.

If you haven’t heard of the Girls Rock camp movement, you’re in luck, since there’s a documentary about the movement that can get you right up to speed.

Granted, the documentary doesn’t feature the RVA camp…but the RVA camp was founded on the same principles. The first Girls Rock! camp began in Portland and camps like it have sprung up in many other places since. This is a short chronicle of the formation of RVA’s first camp session that took place July 25-29.

The story of GR! RVA’s creation involves not just a few coordinators but a vast amount of fundraising, organizing, and involvement from volunteers and businesses throughout the city. Constance Sisk, one of the organizers of the camp, commented on the enthusiasm of Richmond:

Everyone I talk to wants to contribute to this project; from donating drum heads and guitar strings, to offering advice on conflict resolution, to offering space for fund-raising events, to recommending useful contacts to build our Girls Rock! RVA network — the outpouring of support has been tremendous.

We’ve gotten the question a number of times: ‘Why girls? Why is this a ‘girls’ rock camp?’ To me, this excitement and desire on the part of all kinds of people from many corners of Richmond and the surrounding area to personally contribute to this project is the best demonstration of its value to the community — of the value of a ‘’girls’ rock camp’ in 2011 in Richmond, VA.”

Why girls indeed? What sort of impact were the leaders hoping to make? Sisk explained to me in her email that:

In the short term, we want the kids, families, volunteers, and supporters that create and attend our camp, to leave camp feeling overwhelmingly positive about the potential of kids, the potential of girls, the potential of collaborative creativity, and of those who encourage and nurture self-expression and respectful collaboration. Looking further into the future, we want girls and women to create and perform publicly. We want to see more women involved in more ways in popular music in Richmond, and we want to help build networks that allow women and girls to support each others creative endeavors. We want more girls and women participating in the networks that already exist among musicians, promoters, sound and light technicians, venues, and live music enthusiasts in Richmond.”

Stacey Randolph, another organizer, put it this way:

“I hope that the girls will feel empowered and gain more confidence. In addition to focusing on music, Girls Rock! aims to inspire young women by giving them a space to be creative and allows them to express themselves freely. On a larger scale, as more programs like Girls Rock! continue to be created, and as more women begin to play music, the idea of females ‘rocking’ won’t be as rare. The idea of a woman playing the bass or drums or writing music won’t be such an anomaly.”

There were fundraising events: songs were played, poetry was slammed, and the camp grew in the minds of its makers. The desire to create far-reaching varied impacts in the lives of area girls grew as well — not only would the camp focus on music, but it would include workshops on things like self defense, mural painting, zinemaking, healthy foods, and creative writing. At first, the organizers hoped to be able to offer several scholarships to campers who wished to attend, but soon, that idea was replaced with the idea that the camp should be free for all campers.

Girls Rock! RVA was growing, and so too was the level of excitement among the planners. Constance was most excited about “meeting kids and families; creating and maintaining a culture that encourages girls to respect themselves and each other, to work together, to be creative!” For Stacey, it was all about “seeing the campers excited about camp and playing music.” 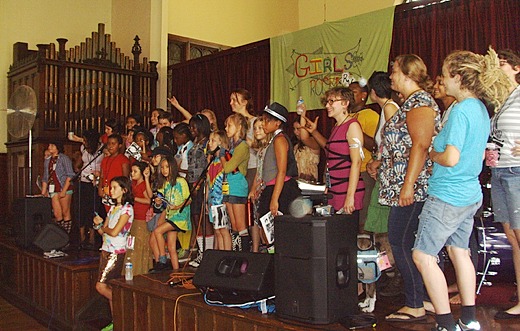 One day, camper applications rolled in. “Ecstatic” might be a word to use to describe the glee in the air that evening; applications and accompanying artwork from the campers were passed around from hand to hand. There were campers. They were applying. This camp was happening and it was going to rock.

And then, quite suddenly, it was here: rock camp week! Or as leaders Crystal Davis and Melissa Giorgi put it:

T’was the night before rock camp
And all through the city
A church packed with amps
Done was the work of every committee.
Name badges, camp bags, and water bottles were created with care
In hopes that 22 campers soon would be here.
The children were nestled all snug in their beds
While rhythms and lyrics danced in their heads.

Throughout the blisteringly hot week St. Andrews played host to all four bands that were formed: the Some Things, Cherry Bomb, The Flaming Gummy Bears, and the Pop Rox.

Friday’s showcase consisted of each band performing a song that they had worked on together throughout the camp week. Throughout the crowd friends and family members cheered the performers on with handmade signs and whoops of encouragement.

 
After the Friday showcase, I asked several campers what their favorite parts of camp were. Raven, a member of the Flaming Gummy Bears, replied that her favorite part was “drumming”. She just started drumming that week, and when asked if she thought she would keep it up, she replied with an affirmative.

From other campers I questioned, the answer about the favorite part of camp came loud and clear: Friday’s showcase performance! If anybody ever struggled with nerves about singing in front of huge crowds (St. Andrews was standing-room-only!), you would never know it from the confident performances given by all the band members.

Singer Isabella’s favorite part of camp was that she “got to learn how to sing a lot better, and what to do when you’re learning to perform.” She learned to “take great, deep breaths.” When asked if she thought she’d gotten better at her craft, Isabella replied with a confident “Yes.” 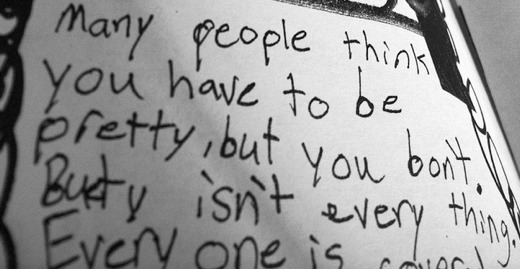 And so, camp was over. At St. Andrews girls lingered, some looking over copies of the zine that they had helped create that week.

  With one final group photo, Girls Rock! RVA camp week came to a close, but while things may have wrapped up for this year the organizers aren’t ready to set down their instruments quite yet. The group is currently gearing up to achieve official nonprofit status. Stacey Randolph expressed enthusiasm for the future of the camp: “We hope this is the first of many camps to come. Perhaps if we gain our nonprofit status, we can make Girls Rock! RVA an after school program as well. We’ll see! Either way, we’re really excited about the possibilities.”