Get your warm fuzzies on: “It’s A Wonderful Life, A Live Radio Play” at Swift Creek Mill Theatre

Swift Creek Mill Theatre’s interesting take on It’s a Wonderful Life is the perfect way to get your Christmas season on track. That is of course, unless you are a Mr. Potter.

It’s the holidays, y’all! Time for hot chocolate; Christmas carols; and that zany, wingless angel, Clarence. It’s A Wonderful Life has always been a big part of the Christmas season for me. Only the Mr. Potters of the world can resist being melted into a puddle watching good old George Bailey realize the amazing things he’s done in his life. So you can imagine my excitement realizing I’d get to kick off the holidays this year with Swift Creek Mill Theatre’s production of the show. However, my bubble burst when I realized this version was “A Live Radio Play”– no costumes, no fake snow, no weird wooden wheelchair, no Zuzu’s petals! It was going to be a purely auditory production.

I’ve seen the movie and enough productions of the show to be pretty set in my It’s A Wonderful Life ways but I tried going in with an open mind. As soon as I saw the set, I was intrigued. Onstage was ‘Studio A’ at WBFR, a radio station in New York City in the 1940s. The Christmas lights strewn around the room, the massive sound effect station, and the coolest player piano ever set the stage (literally) for a great production. As we were introduced to each performer by the golden voiced Steve King, I found myself actually excited to see how they were going to pull this all off. 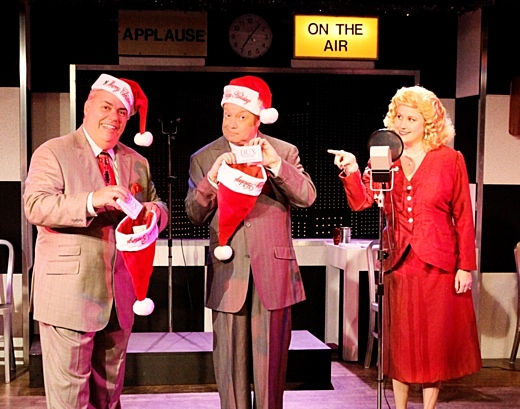 The entire show was performed by six people: five actors and one very coordinated sound effect guy. Some of the actors had up to thirteen roles they were playing and thus, thirteen different voices to create. While some familiar voices were there such as Mr. Potter, Ma Bailey, and Martini, others were a bit of a stretch. But I have to give all of them credit for being able to keep track of them all and switch characters so quickly.

The best part of the show, however, was Paul Deiss’s impeccable timing as the sound effect engineer. Watching him constantly moving around the stage–breaking glass, slamming doors, dropping heavy objects into water–was what truly made me appreciate the art of radio plays. No detail was spared in giving the ‘listeners’ a full auditory experience, not even the subtle sound of a cigar being lit.

As cool as it is to watch the show being performed, it’s an absolute must to close your eyes at some point to take it all in as a true listener and witness the magic of radio. For It’s A Wonderful Life fans and newbies alike, the show is an awesome way to usher in the holidays. Hurry over to Swift Creek Mill Theatre for a healthy dose of Christmas cheer while you can. And when all is said and done, you’ll understand why a Christmas carol player piano is at the very top of my Christmas list this year.