Everything you’ve ever hoped for in the sixth edition of a car chase franchise! There are six of these movies! They are filming a seventh!

If you’re only vaguely aware of the existence of the films Furious, you might think that each movie is just one extended vehicular chase scene after another, after another, after another–sort of like a human centipede of car movies. And maybe the first four movies were like that, but things changed beginning with Fast Five. With the public’s interest waning2 in continual car chase and car culture flicks, the producers decided to shift the franchise to the Caper/Heist genre–which is fine by me as I don’t know a carburetor from…another thing inside of a car. 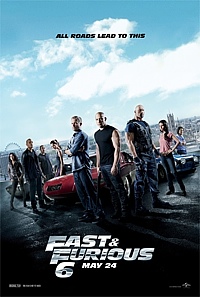 After their most recent adventure, a $100 million heist in Rio, Dominic Toretto (Vin Diesel) and his merry band of criminals have retired to foreign lands that have no extradition treaties with the United States. The crew members have moved past their fast and furious lives of crime and onto more grown up, slower paced things like wives, kids, and flying on private jets filled with beautiful women.

Things are going great until another less merry, more evil band of criminals pulls off a series of expertly executed, vehicle-based thefts of Very Dangerous Technology Things. If these criminals get a hold of the Very Dangerous Technology Things, millions of people could die! But these bad guys, they soooooo talented with their cars, how will we ever catch them? If only there were another crew of dudes who love driving cars that, although they have a checkered past, are ultimately loveable and mostly trustworthy…

I mean, guys, with FF6 you get pretty much what’s advertised on the tin. The acting is forgettable, the characters are shallow, and the plot is predictable. But the sets, car chases, and action sequences are exquisite. During the film’s final, twenty-minute action scene I found myself truly tense as Vin Diesel flew through the air to headbutt a dude. And the movie’s climax is the most amazing, incredible, self aware thing I’ve seen a movie do in a long time.

So, while Fast & Furious 6 is certainly no Drive (but what is!), it’s gotta be better than The Hangover Part III, right? It might even be worth your time (maybe)!

Why you should see the movie

If you’ve weathered the first five films, there’s absolutely no reason not to see the sixth. Plus, seriously, the last scene!

Admittedly, this is the first FF movie I’ve seen, and I was a little lost at times. There’s definitely a lot of fanpandering, and if you’re not a fan, well, you’re going to miss a lot of that.