Wouldn’t you know it, the world has ended yet again. This time it’s Matt Damon who saves us all with a mixture of violence, technology, and a whole lot of heart. Zzzzz. Am I glad that I won’t be around at the turn of the next century! If Matt Damon, Will Smith, and/or Tom Cruise aren’t alive by then (you never know with that last one), we will almost certainly be toast—possibly at the slimy hands of antagonistic aliens, possibly because of our own reckless behavior towards Mother Earth, but most likely a combination of the two. 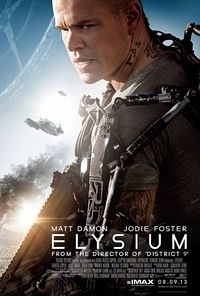 And it turns out, we must be better at making these wistful films than we are at solving the problem, because they just keep getting churned out a heck of a lot faster than the planet produces coal. Oblivion dropped Tom Cruise into a futuristic New York that had been devastated beyond recognition, After Earth pitted Will Smith and his anxious kid against an Earth that had become plain hostile towards humans, and now Elysium sees Matt Damon trying to bridge the gap between the classes…which is a pretty huge gap, considering all of Earth’s rich people have flown the coop for a prissy space station that appears to be nothing but manicured lawns, palms, and infinity pools.1

The Hollywood equation for Earth’s survival seems to be something along the lines of: Muscular man + brute force – someone that he loved a long time ago = Earth’s quality of life restored by a factor of about a billion.

Nowadays, the aliens or robots or whatever else are only even still around for a good fight scene. Instead, most of these films start out with a somber and somewhat smug announcement that we’re in this predicament because former Earthlings (aka you) have really screwed the pooch this time. Nice going, us!!

Emphysema is no exception to any rule ever. Max De Costa (Matt Damon) dreams of pulling himself out of the slums of 22nd-century LA. He eyes the big hood insignia that floats visibly in Earth’s orbit and works doggedly to be able to “afford a ticket” to that paradise in the sky. One day, Max has a teeny radiation accident at work and is given five days to live. His shady friend, Spider, outfits him with a metal exoskeleton thing and shoves him off on a job where, in exchange for a ticket to Elysium, Max downloads information from someone else’s brain. Into his own brain. Via a little device and a laptop.

All this downloading of information from brain to brain! If that sounds a lot like Inception to you, it’ll sound like a dead frigging ringer once you hear Ryan Amon’s similar score.

Director Neill Blomkamp, of District 9 fame, has already made his point: It’s reeeeal crappy to segregate based on wealth. HOW DO THOSE RICH JERKS BREATHE UP THERE, you ask? Just shut the hell up, please. This is not about science, this is about immigration. All the poor people are on Earth, which apparently has turned a grisly dusty sepia tone and is filled with ruffians who can’t afford to get off the planet.

Asylum is also about health care. The rich people have these bodaciously slick sickbays that are conveniently programmed to fix every possible malady by “re-atomizing” you. As a consequence, everyone on Elysium is fit, healthy, and unlined.2

Poor people and their array of sick children are always trying to sneak onto Elysium via space shuttles, just for a crack at getting little hobbling Susy onto one of those sickbays. But not on Jodie Foster’s watch.3 She’s Secretary Delacourt, Elysium’s Secretary of Defense, and she sure loves to shoot down rogue shuttles. Those sick bastards want to infect her perfect silk suit life, and she is NOT having it. She also has some boring beef with the president, who isn’t harsh enough on immigrants.

In addition, Delacourt has a henchman, the film’s danger element. Agent Kruger (Sharlto Copley) is a puzzling guy, so unfortunately styled in hair and makeup (and sometimes even clothes) that I couldn’t help thinking he would be better cast in some sort of Biblical film as Peter, Simon, or Paul. Not to mention, a South African accent, despite its dicey heritage, doesn’t strike fear into my heart.4 His motivations are too simple: he’s crazy, which ends up being crazily uninteresting. In fact, every character’s motivation is simple. Max wants to leave and does not want to die. Frey, his childhood sweetheart, wants to save her child from leukemia. Secretary Delacourt hates dirty people.

Neill Blomkamp’s problem is a tendency to direct like a child. District 9 was simplistic, sentimental, and overly symbolic. Ellipsis is similar, down to the message itself (“Everyone be cool with each other, man”). But noble as he starts out, he fails to add any depth or richness to any part of his stories. Instead, a strongish start ends up fizzling out as both films become vehicles for uninspired action scenes. The solutions to these huge problems of class warfare, race, the broken healthcare system…they get sorted out in ways so simplistic as to be distracting. I don’t usually end a film with the thoughts, “What will happen next? How long will this supposed equality last? Have you even TRIED to think this through, Blomkamp?”

Matt Damon, who it seems I fell in love with at some point over the past few years, has many talents.

2011’s Contagion, available on DVD, features both Matt Damon and an end-of-the-world scenario and is a much better use of your time.

Hardly. Half a prop for having a female villain, but the two female characters exchange exactly one word.