Drawing RVA, one cartoon at a time

After arriving in town earlier this summer, Douglas Orleski started cataloguing RVA by drawing cartoons. Ever since, his style and humor have made his Tumblr a hit among businesses and individuals. When Douglas Orleski moved to Richmond this past summer he began doing something that’s drawn a local following. He began drawing cartoons.

These aren’t just any cartoons, but those that represent distinct locales across RVA. From businesses, events, to monuments, Orleski’s illustrations are succinct representations of what he has come to love about his new city.

“Most of my ideas started on my walk to work,” said Orleski, 29, a Public Relations and Marketing Specialist for Theater VCU. While longtime Richmonders are very familiar with the Jefferson Davis monument, the Sauer’s Vanilla sign, or even the rack of used CDs at Plan 9, these sights were new experiences for him. The cartoons, which he posts on his Tumblr, RVA Coffee Stain, helped him appreciate his new city. 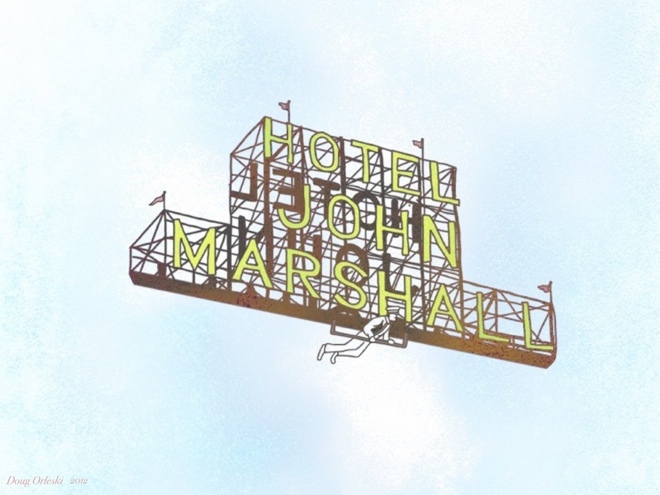 Orleski has never taken an art class, but he said “I’ve always doodled as a kid.” At 23, he began to cartoon regularly. While attending college at Christopher Newport, Orleski contributed a weekly cartoon to the school’s newspaper, The Captain’s Log, over a three-year period.

While living in Hampton Roads, he regularly contributed to a community blog. “That’s where I started to pick up steam” with cartooning, he said. His contributions were “a little more alienating…and political,” distinct from what he typically draws now.1 “I never connected with the Hampton Roads audience,” as a result. His Richmond audience, however, has proved much more receptive.

He said the reactions to his unique representations of RVA have been completely positive. “The way they uplift artistic people in this town” is something he admires. Perhaps that encouragement is one reason why there’s rarely a day in which Orleski doesn’t cartoon.

In the past, he drew on paper. But between drawing an image, scanning it, and then uploading it to the web, “a cartoon would take so much time.” To streamline the process, he now uses an iPad, a Griffin stylus pen, and the Sketchbook Pro app. He publishes his cartoons on RVA Coffee Stain, a name which he said “comes from when I use to draw cartoons late at night on computer paper while drinking coffee. I would always accidentally put the cartoon over that little coffee rim that forms on the bottom of the mug.”

Depending on the complexity of a particular illustration, Orleski completes most of cartoons in a few hours after returning home from his full-time job. Some of his most impressive drawings, however, have taken days.

A recent World of Mirth cartoon required two days for completion and, while not RVA-related, his illustration of the Philadelphia Phillies’ Citizens Bank Park took him nearly a full week (his overlook of RVA and an alley trash nook are other complex drawings he’s done).

While he worries that one day “people will get bored of my cartoons,” that hasn’t been the case so far.

Owners of Dixie Donuts appreciated Orleski’s depiction of [their business’s exterior][ex] so much, they purchased a print of it. Ipanema and Tumblr have also purchased his prints. However, businesses seeking a cartoony endorsement from Orleski may be disappointed.

“I won’t do a business I haven’t been to” or a restaurant at which he has yet to eat, he said. Even if he has given the business his patronage, it’s no guarantee it will be the subject of a cartoon–he saves those for the places he likes. However, places that he hopes to cartoon in the near future include Hardywood, The Roosevelt, and a Segway tour of Richmond. 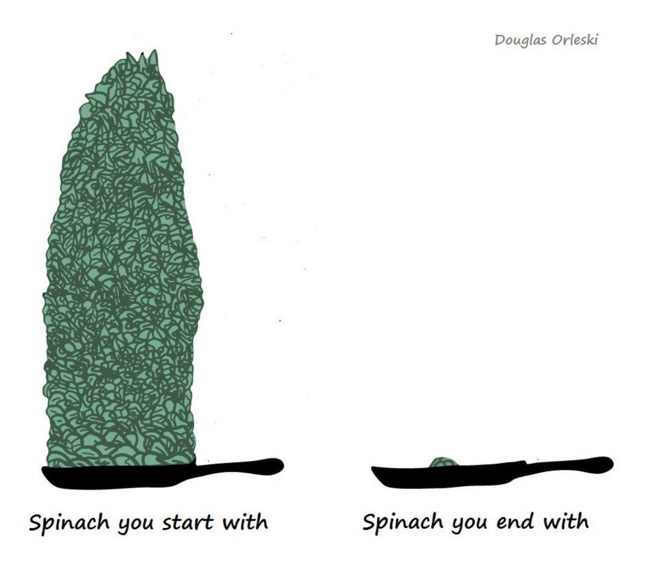 In addition to local businesses, individuals have also paid him for prints. “I never sold a print before this year,” he said. “I joke that I eclipsed last year’s sales record of $0.” He said most of his requests come through his blog. Not only does Orleski happily sell prints, but he’s used an unusual way to give them away.

Using a concept known as art abandonment, Orleski will occasionally hide prints in public for Richmonders to find. He recently placed one near VCU’s campus, and has also done the same in Carytown during this year’s Watermelon Festival. “I’d like to do more with things like that,” he said.

He will soon begin work illustrating a poem written by VCU student Rob Gibson to be published in VCU’s undergraduate literary journal, Poictesme (pronounced: pwah-tem). He has also designed T-shirts for the website, Voyemonte, where the illustrations “play off of the translations of proverbs from different countries.”

Still committed to cartooning RVA, Orleski is also open to drawing in other capacities. “I would love to eventually become a full-time artist,” he said. “As I cartoon and opportunities [arise], I’m up to try new things.”