Don’t Stop Believin’: That this film will eventually catch on

A mildly compelling story about a talented singer from Manila. Oh, plus you get to hear a bunch of Journey songs? If there’s one thing that sells tickets, it’s a bunch of aged rockers jamming out on stage. That’s not to say that the members of the mega-popular Journey take that for granted. After nearly a millenium of rockin’, these guys have had their share of ups and downs. 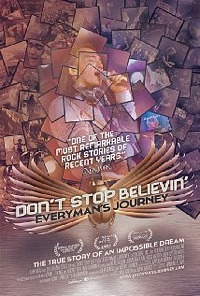 Neal Schon, Ross Valory, Jonathan Cain, and Deen Castronovo are painfully aware that if it were just the four of them, they’d still be trying to convince promoters that fans would pay to see them play “Faithfully” without legendary Steve Perry on vox. After years of steady slumping, they planned a tour, hoping that somehow they’d find the set of pipes that would put the band back on the map–someone who could echo Perry’s famous range while delivering an engaging live performance.

It’s a good thing this story doesn’t take place twenty (or even ten) years ago, because Journey did a very un-rock-and-roll thing and started to Google their own cover bands. Sifting through hundreds of potential singers online, guitarist Neal Schon happened upon a Filipino singer named Arnel Pineda who could belt out “Open Arms” so well that your brain has a hard time reconciling such a Steve Perry-like voice with this tiny, Filipino man with limited English skills. But, in the end, they couldn’t ignore the fact that the two men both had beautiful heads of long, shiny hair.

So Neal Schon reached into this guy’s unassuming life in Manila and turned him into a star.

It’s such a cool story, and Arnel is such a charming, lovable guy, that it’s a shame this movie is so poorly made. Writer/director/producer Ramona Diaz directs like an adoring cousin: so many extreme close-ups, so much time spent lingering over a joke that really wasn’t funny, and SO much screentime. Don’t Stop Believin’: Everyman’s Journey is not only poorly titled,1 it’s two hours long. Doesn’t sound too scary to you? What if I told you that they find and import Arnel within the first 15 minutes. They do! And their little monologues about it the whole experience tend to go like this:

“I said ‘Look at this kid!’2 and then Jonathan was like ‘Yeah!’ and then I was like ‘Whoa!’ I mean…whoa, this kid can SING. He can really sing. He’s the real deal. I wasn’t sure it could work, but here he is. Yeah! Singing. What a kid and what a song! Yeah and whoa!”

Arnel’s the exception. He can’t open his mouth without uttering a pithy beautiful thing (or a hit single from 1978). He’s basically the most likable person on the planet, and you root for him like crazy. Even the original band members seem starstruck around Arnel, whose general attitude is very, “Wow, I cannot believe I am here. You guys are so wonderful. Can I get anything for you? BRB let me do this incredible vocal feat for two hours, like I’ve done for the last million nights in a row.”

So on one hand, it’s nice to see dudes love each other. On the other, there are titles that look like they were done by someone’s enthusiastic superfan uncle. And a weak story arc. And a gift for latching onto the sentimental instead of the interesting.

And a steadfast belief that watching someone use the Internet is fascinating to the average viewer, who has most likely never seen nor heard of an Internet. Diaz walked us through the exciting world of Google screenshots, with live action search reenactments that went like this:

Just like that, I have a new life goal. It is to die peacefully in my old age without anyone having ever watched me conduct a web search.

For just a couple of hours, you want to think about people doing pleasant things for other people.

You have the time and energy to read one Internet article about this subject. That’ll do.