Your intrepid RVANews JV movie reviewer subjects himself to Scream 4 to find out whether you should too. His takeaway: do you like meta movies?

There are certain rules that one must abide by in order to pathetically attempt to reincarnate a long-dead movie franchise, especially when all of the principals are working a lot in TV these days, if you know what I mean. Scream 4 not only follows these rules, but as usual, the characters helpfully explain them to you in some kind of macabre regurgitation of screenwriter Kevin Williamson‘s UCLA scriptwriting classes. 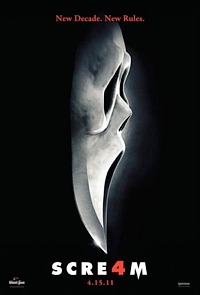 Get younger. A lot younger. The three remaining characters of Dewey Riley, Sidney Prescott, and Gale Weathers-Riley (David Arquette, Neve Campbell, and Courtney Cox) average an alarming 40.7 years of age, which isn’t exactly the prime demographic for summer popcorn high school slasher flicks. A whole new crew of 21-year-old high schoolers (there are 7 actresses playing main character high schoolers who are 21 in real life, but then again, there are 723 main characters, so it’s not really bad odds) are either introduced or retconned in to bring the median age on-screen down to a reasonable mid-twenties. Most impressive among these was Hayden Panettiere as Kirby Reed, who has all of the makings of a sustainable career on her hands. I guess? Guys I never watched Heroes. The jury is still out on Sydney Prescott’s alleged cousin-who-was-there-all-along Jill Roberts, played by Emma Roberts (which, did you know she is Julia Roberts’s niece? Roberts Roberts Roberts) and, to be clear, I never watched Unfabulous either.

Assume no one knows anything. It has been over a decade (I know!) since Scream 3 came out, and there are teenagers that drove themselves to see Scream 4 who weren’t even born when Scream 1 was released (in South Dakota by themselves but not at night, and in six other states with a learner’s permit, but still). Fortunately this is actually standard operating procedure for a Scream film, because the entire premise is that the characters know exactly how to handle finding themselves inside a horror movie. Characters from Scream 4 frequently discuss in detail precisely how events in the movie universe stack up against “the first movie,” by which they mean film-within-a-film Stab 1, which since Scream 3 has been a convenient way to literally discuss the Scream series itself. But then this leads to Scream 4 characters unselfconsciously discussing how “meta” it all is. Which has been what Scream was all along, which I suppose is why it made sense for it to be brought up. Over and over. Yes we get it, Scream. Why not just go Marx Brothers and deliver filmmaking lectures right through the fourth wall to the audience already.

Up the bodycount. Let’s all agree, for spoiler reasons, that I should say no more about this except to confirm that yes, the ol’ bodycount is indeed upped.

Up the boobcount. There are a spectacular quantity of women who have significant screentime in Scream 4, and they look every kind of fabulous. Now, perhaps it’s just because I was 16 at the time, but it’s hard for me not to prefer the tasteful 90s bobs that infested heads in Scream 2 to today’s flowing locks (Although Hayden Panettierre looked great with super short hair (Yes I have praised her a few times in this review it’s no big deal though (OK look, honestly everyone, she’s a good actress who makes interesting personal grooming choices (Don’t make this weird)))). But I couldn’t overlook the fact that Scream 4 has a higher proportion of female characters than Mona Lisa Smile, without any of the I-hope-no-one-catches-me-watching-this guilt. Would you like to see a movie where dozens of beautiful women ultimately fail to evade penetration metaphors? Great, I’ve got just the movie for you.

On the other hand, if you prefer chiseled, manly dudes on the big screen, you’ll have to muddle through with the likes of David Arquette and Rory Culkin. So good luck with that.

By now, you should know whether you like Scream™ Brand Cinema Experiences. You really don’t need me to tell you whether you are going to like Scream 4 or not. Look here: I can tell you that Scream 4 is better than Scream 3 (which had a different writer and was spooked by Columbine) but not as good as Scream 1. I can also tell you that you don’t need to see Scream 4 out of any kind of pop culture shared experience reason. What else do you need to know? Oh yeah: still no nudity. Yes, they joke about this. No, it doesn’t change things. Well, the more things change, the more they stay the Scream.

Justin Morgan knows that there is no problem an Excel spreadsheet, a sweet tea, and a pass to the tight end won’t solve.