Decorating the house for the holidays can be an expensive undertaking: wreaths, centerpieces, garland. It all adds up. But this Sunday, an event called Deck the Halls will give Richmonders a chance to make as many decorations and crafts as they want for just $30, with every penny going to a local nonprofit that helps area homeless women and children.

Carolyn Peart created Deck the Halls nearly a decade ago, and still hosts the event on her Ashland farm. “I grew up with parents who set an example of giving back,” Peart said by phone last week. “My earliest memories are of my parents being involved in activities [that gave] back to others.”

When she moved to Richmond in 2003, she began “thinking about how to get more involved here.” While trimming boxwoods with her sister one day in September 2004, the siblings began discussing the work of one local charity in particular, Hilliard House.

Started in 2000, Hilliard House shelters homeless women and their children, the first program of its kind in the Richmond Region. It provides 30 beds, and works with local services and agencies to offer women and children affected by domestic violence, drug abuse, and homelessness the “support needed to take the first steps toward a new beginning.” It was a program that Peart wanted to support.

She said that “Hilliard House takes [mothers and children] in and gives them some stability.” Not only does Hilliard House provide a safe environment for families to rebuild, the relapse rate among homeless women “is much lower than the national and state averages,” she said. Helping to facilitate long-term employment as well as offering workshops on nutrition, parenting, and mental health counseling, the nonprofit is instrumental in assisting mothers and children in the region. It’s an ambitious program funded primarily through grants and donations. “Hilliard House needs every penny,” Peart said. 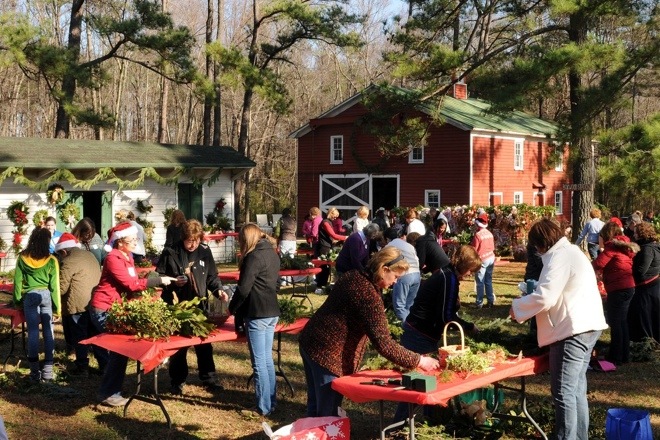 That’s where Deck the Halls comes in.

Each year, Peart opens her 20-acre Pine Grove Farm1 in Ashland, VA to the public. For $30 entry ($10 for children ages 5-12), attendees are given all the supplies they need to create custom wreaths, table toppers, surrounds for candles, and more across 20 different outdoor stations. “It’s a day in the country,” Peart said. Fresh pine, cedar, hemlock, holly, boxwood, and more are provided fresh from neighboring farms. Not only is the event a welcome respite from the frantic pace of the holidays, but it also welcomes crafters of all stripes and skill levels.

“We provide every single thing that you can think of…to decorate your house for the holidays,” Peart said. This includes: bows, wire, clippers, gloves, and anything else you may need to create custom Christmas decor. Peart and a team of volunteers also provide complimentary soup and sandwiches, along with warm drinks. Experts from Ashland Garden Club will also be on hand, one person at each of the 20 stations, to answer questions and assist in craft making. As Deck the Halls has grown, so with it has the need for volunteers.

“They come once,” Peart said of attendees in previous years, “and then they come back with four people.” If even half of the 400 hoped for this year’s event are adults, Deck the Halls will raise at least $6,000–all of which will go to Hilliard House. “We don’t keep any money for administrative costs,” Peart said. “You can make as much as you want and it all goes to charity,” Peart said. It’s this reason that Deck the Halls continues to grow annually.

“Everyone smiles when they leave this event…It brings you back far more than you give.”