Dark Shadows: A study in camp

Johnny Depp and Tim Burton are back in action again! Will this be Alice in Wonderland? Will it be Charlie and the Chocolate Factory? WILL IT BE EDWARD SCISSORHANDS? The Tim Burton/Johnny Depp combo is like…well, whatever it’s like when a really handsome guy wears bold makeup, does a funny voice, and cavorts around a very stylized, grey soundstage, sometimes enchantingly and sometimes ridiculously. It’s like that.

Dark Shadows leans towards the enchanting side of the Burton/Depp spectrum–up there with Sweeney Todd but not quite making into Edward Scissorhands territory. It’s got the potential, though. JD is at his understated best as Barnabas Collins, the 200-year-old vampire who finds himself plunked into 1972, where his grand mannerisms and fiendishly long nails contrast delightfully with shag carpets and the Steve Miller Band. As you might have suspected, this odd juxtaposition is best depicted in a montage: Woman with Farrah Fawcett hair talking in a phone booth? VAMPIRE JOHNNY LEERING BEHIND HER. Teens pounding fries in a burger joint? VAMPIRE JOHNNY STARING THROUGH THE WINDOW. Need a pillowcase from the linen closet? VAMPIRE JOHNNY TRYING TO CATCH SOME Z’S. 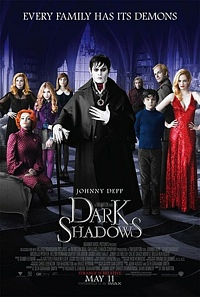 OK some of that makes it sound like Dark Shadows is terrifying, but it’s not, I promise. It’s quirky and lovable, smartly paced and entertainingly acted–everything a Tim Burton flick should be. Based on the wildly popular cult classic soap opera of the same name, the film makes a commitment to seriously good camp. And if you’re laughing while a guy rips out the throats of a circle of hippies, then you know that you are in the presence of a camp-master.

Here’s the deal in a nutshell: Barnabas Collins was turned into a vampire by a hottie witch that he spurned in his youth. Did you know witches can just make people into vampires? Yeah, dude! Witches like Angelique Bouchard (played by Eva Green) can do just about anything they want, which makes the plot kind of sketchy sometimes. Angelique’s inhuman life has also spanned centuries, and while Barnabas was whiling away the years in a coffin prison, she was getting her revenge on his family, generation after generation. Now, in 1972, she owns the little fishing town in Maine, hook, line, and sinker. But why bother putting the moody Collinses out of business? Why bother manipulating the good people of Collinsport? Why not just raze the Collins mansion to the ground with your all-powerful witchery and send them off to the happy brooding grounds once and for all?

Best not to think too hard. Dark Shadows is just a fun vehicle for hilarious jokes, ultra-hilarious sex scenes, and basically just proving that you can make any scene less grim by applying 70’s rock’n’roll.

And JD isn’t the only one cracking people up–Michelle Pfeiffer, Chloe Grace Moretz, Eva Green, and Jackie Earle Haley employ killer facial expressions and one-liners that bring the house down.

The only problem, I’d say, is that there just aren’t enough jokes. The film comes to its logical conclusion during a climax that’s as jokeless as it is joyless, and, since, the romantic aspect has been pushed aside to make room for the conflict, our hearts aren’t in the sappy ending. I’d much rather have watched the first act, the second act, then the first act again. And even those parts could benefit from more humor. Vampire Johnny needs to be leering in EVERY window, sleeping in EVERY linen closet, and killing EVERY hippie he sees. Let’s turn this up to eleven, Burtondepp! Why the hell not??

Oh well, maybe in the sequel, which is hinted at in one of those “we thought this person was dead BUT ARE THEY?” moments at the very end. The kind of surprising reveal that surprises no one and means the credits are just about to roll. I’m into a sequel, though. Anything for more Barnabas.