The Counselor: You can’t cheetah death

The Counselor is chock full of wonderful actors, but tries far too hard to pack itself with cynical, nihilistic imagery and heady dialogue, leaving no room for a plot line that we could settle into. Writer Cormac McCarthy (No Country for Old Men) and director Ridley Scott (Prometheus, Blade Runner, every other movie) aren’t for everyone. The former is a master of bleak plots and bleaker characters, and some (me) find the latter to be scattered, annoying, macho, and egotistical in his approach to filmmaking. But to many, these bros are geniuses.

So I gave them a shot with The Counselor, as it’s chock full of wonderful actors (Penelope Cruz, Javier Bardem, Brad Pitt, and Michael Frigging Fassbender). And while their performances were mostly at the higher end of the scale (Fassbender and Bardem leading the pack with a not-as-terrifying-as-she-wanted-to-be Cameron Diaz bringing up the rear), the film tried far too hard to pack itself with cynical, nihilistic imagery and heady dialogue, leaving no room for a plot line we could settle into. 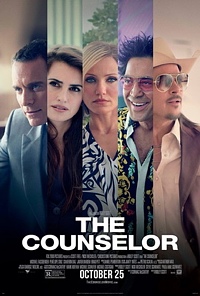 The Counselor (Frigging Fassbender) is a lawyer who has decided to wear many expensive suits, woo the love of his life (Cruz), and dabble a little in the flourishing border drug-smuggling trade with his friend/client/whatever Reiner (Bardem). Reiner, see, is eccentric and money-drunk, as is evident by his brightly colored sunglasses and spiky hair. His girlfriend, Malkina (Diaz), is a real predator, and we’re introduced to her as she smugly watches her pet cheetah kill a hare. She then proceeds to tell us all about how she has no feelings. “Isn’t that a little cold?” says Reiner, who’s pretty slow on the uptake. Malkina doesn’t care about being cold. She’s too busy juggling a bunch of overt symbolism as the film’s wild animal—she has cheetah spots tattooed on her back, her eye makeup is catlike, she’s always in animal print, and she (probably) runs at 70 mph speeds!

Let’s see, what else is there. Brad Pitt is some sort of drug trade middleman, so he’s involved, and Rosie Perez is a prison inmate with a son who rides a motorcycle around too fast. He’s also involved with this drug deal that the Counselor has invested in. So you’ve got everyone and their mother (literally) hanging their hats on a $20 million enterprise involving a septic truck full of cocaine, while Laura (Cruz) wears a lot of white and sits around innocently, wondering where her BF is most of the time.

This seems like a really cool setup, I know, but it gets stuck in a bog of everyone trying to talk the Counselor out of embarking on this descent into greed and violence. There’s also some torturous philosophizin’ about People. “People!” they’re always saying. “People are the worst! People gotta make choices and then live with the choices they make. Then they gotta create their own worlds for themselves and also deal with the other people who are trying to kill them all the time because here in the drug trade, everyone wants to prove they don’t care about death, so they just kill everyone in gruesome ways with no remorse, almost like, let’s say, a cheetah, and what’s the point of anything and maybe you, me, and the audience of this movie should all just jump into a ravine.”

And because it’s Cormac McCarthy, you know it’s not going to end well. Sure enough, things start to deteriorate for the Counselor in ways that aren’t really clear. He sheds a couple of tears, though, so you know it must be serious. Various other things happen, and the plot crawls along as we get more and more tired of waiting for the axe to fall. While we wait, Cameron Diaz plants her genitals on the windshield of a Ferrari and illustrates man’s fear of a powerful, sexually self-sufficient woman.

McCarthy specializes in exposing the limits of our expectations by refusing to gratify us with satisfying endings. Sometimes, this works for him. But not here. The only thing we learn is that we might as well go home, lock the door, and waste away to a depressed nothingness. People suck. Killing sucks. Drugs suck. Mexico sucks. Woooo.

You’ve never seen Fassbender play a happy, good-natured guy before. This toothy devil is a delight to watch.

The word “delight” is so, so relative. Go anywhere, anywhere at all (except Mexico) instead of seeing this film.

Technicality. Malkina and Laura have a conversation that briefly involves a diamond, but then quickly goes back to dudes. Then the former propositions the latter, is rejected, and they go back to dudes again. You make the call.