There’s a part in Contagion where everyone is waiting in a line and somebody coughs ominously. A woman asks him to cover his mouth, and he tells her to eff off. This is the beginning of the end.

I have washed my hands so many times since I saw Steven Soderbergh’s new film, Contagion, but I’m not sure it’ll do me any good. Because, as the movie indicates, the panic that results from a worldwide epidemic is not only inevitable, it’s just as scary as the virus itself.

And Contagion gives us a pretty realistic looking picture of what life will be like in the (completely possible) event of a massive outbreak. Ads may call the film a “thriller,” but the feel is more like that of Soderbergh’s 2001 hit, Traffic, only more realistic and less glamorous. Instead of a distinct hero that heartwarmingly maneuvers his family through these troubled times, we have a number of protagonists all over the world playing a variety of roles that will surely be vital during an actual fast-moving viral epidemic. The script plops us directly into their world without the benefit of a lot of background information, so that we’re forced to pay really close attention.

It’s not too hard to stay super focused, though, because the reality on the screen is changing so quickly that it’s impossible to look away. And that reality looks disturbingly like ours. We don’t get any of that subtle, back-of-our-mind, “Oh, this is just Hollywood,” reassurance, because these people look pretty regular*, as do their boring conference rooms, normal cars, hospital rooms, and their various Main Streets, USA. Ever wonder where the line would be drawn between average Joes standing around in an orderly fashion and frantic renegades shoving over pregnant ladies to get their dose of the “cure”? Well, it happens fast, and it happens in every community. Turns out, when there aren’t enough resources to go around and people have to protect their families, everyone just becomes an asshole. 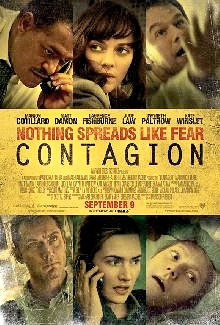 My biggest takeaway from Contagion is that anarchy is humanity’s most terrifying state. With no hospitals, no law enforcement, and no end in sight, we’re basically dealing with the prequel to The Road. And we all know how awesome everyone is to each other in that scenario.** Fear spreads more quickly than a virus does, and, Soderbergh seems to say, you can’t trust anyone when their loved ones are at stake.

Jude Law’s character is best described as “conspiracy theorist/Internet sage,” but it’s not completely clear in whose interest he’s acting. The most likely motivation for most of his irritable deeds is that he just enjoys being able to spout off his daily pageview count. Kate Winslet is an epidemiologist who’s sent out to ground zero in Minnesota to get emergency procedures moving, and Jennifer Ehle is a doctor trying to make sense of it all. Both report to Laurence Fishburne, who handles this sort of thing for a living at the CDC in Atlanta. The World Health Organization has Marion Cotillard in Hong Kong, where the virus may have originated, but back home, Matt Damon is attempting to grieve over his dead wife and stepson while he keeps his teenage daughter alive. Sound like a lot of storylines? It is, but really they’re all pawns of the virus itself. The resulting trajectory is just one giant plot with that has a bunch of major players, even if they never meet each other.

I’m guessing that Contagion will certainly be nominated for several Oscars, but even if it’s not, it’s a must-see — if only so you’ll be convinced to start stockpiling water and guns. I’m only half-kidding around, here. After I saw Contagion, I spent the rest of my day trying to process what just happened, and my dreams that night were not pleasant. And all the scarier because they seem so likely to come true.

*Exception, Marion Cotillard. She will never look regular.
**Never seen or read this cheerful tale of Cormac McCarthy’s? Here’s a preview: in a post-apocalyptic society, you’re basically going to have to live in crippling fear that your path will cross with another human — any other human.