Who’s to say what the best comic of the year is? I dunno…maybe the owner of Richmond’s coolest comic shop!?! While creating end of the year lists may seem a bit impossible for some, a comic that involves Kung fu and zombies has GOT to take the top spot, no?

Ahh, here we are settling into my favorite time of year. Is it the leaves changing? The return of sweaters? The ceremonial transition from iced coffee back to hot? The anticipation of Kardashians, Real Housewives, and Snookis (is that the proper plural form of Snooki? Snookae?) visiting my home with new unscripted adventures? While all of these delight and contribute, they’re not what’s got my britches in a bunch. We’re rolling into BEST OF THE YEAR list-making time! Try to contain your excitement.

It’s true: I’m an unabashed list-maker. I catalog every movie I see ranked by order of preference (not by local release date, but by Oscar year eligibility–I’m no churl). While I try to keep an ongoing tally of worthy comics and graphic novels as the year progresses, inevitably, things like sleeping and parenting and working get in the way. But come November, it’s time to dig deep and reflect on a year well-spent immersing myself in brushstrokes and subtext.

There have been a number of contenders, but my weight is currently thrown behind Kagan McLeod’s Infinite Kung Fu as the book of the year. McLeod’s been steadily working on this mammoth 450-page epic for the better part of a decade, and it’s uncanny to see something that took so long appear so effortlessly composed. 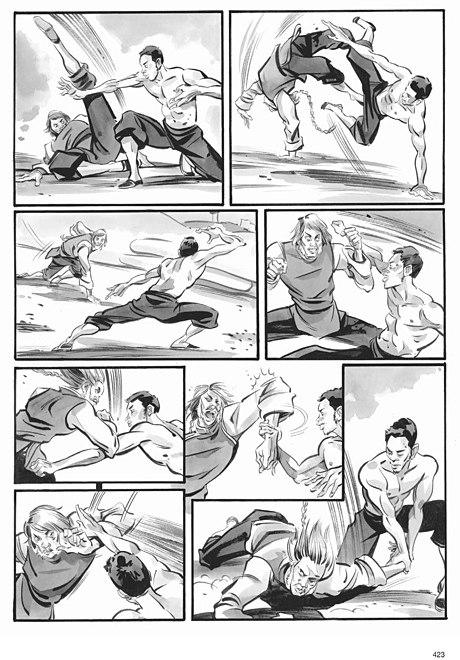 In the wake of some unknown man-made cataclysm, the world has regressed to a time of superstitious barbarism. Martial combat has replaced law, with the strongest few ruling over the remaining downtrodden. Oh, and there’s no room in the afterlife for the wealth of fresh souls relieved of their bodies, so they’re reanimating corpses with alarming frequency. What was your complaint about modern living, again?

Enter Yang Lei Kung, an ex-soldier who exhibits just enough relative morality in this harsh landscape to capture the attention of The Eight Immortals–benevolent deities who need a mortal hand to overthrow the cruelest and most evil of dictators. As Yang Lei Kung embarks on his quest, he perfects his kung fu through a series of battles with zombies, monks gone wrong, and truly bad mofos. Luckily he has help in the form of the Eight Immortals’ disciples, most notably Moog Jugular. Yes, you’re right–that _IS_ the coolest name for a character ever. Moog Jugular’s career as a rock’n’roll superstar faded when the world collapsed, but he never forgot the funk. If Bootsy Collins and Bruce Lee had a baby, he might look like Moog–if that baby  wasn’t a horribly deformed scientific anomaly. 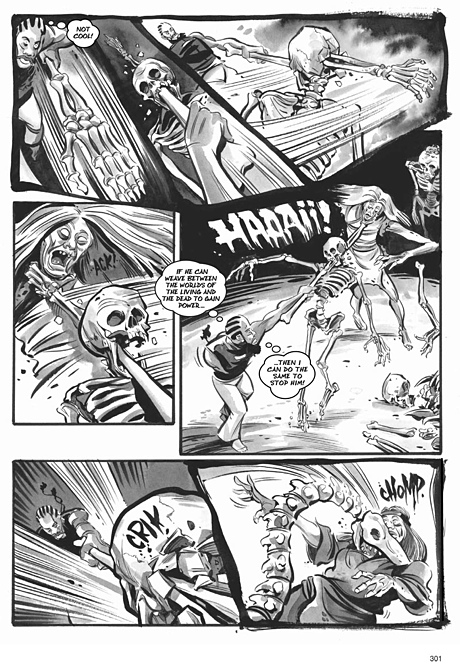 Chances are you’ve seen Kagan McLeod’s art already. He’s been paying the bills as a highly sought after freelance illustrator whose images have appeared in all your favorite magazines. There’s a confidence to his brush line and ink wash technique that seems to defy physics. His drawings have the energy of a Tasmanian devil tempered with the control of a seasoned sniper patiently lining up his next shot. And his panel-to-panel storytelling ability walks the most coveted of tightropes. It takes a real master to balance clarity with energy, and it wouldn’t surprise me if McLeod did it all wearing a blindfold. _He’s that good_.

What makes Infinite Kung Fu my book of the year, so far, is that it is so completely what it sets out to be: a fully realized genre mash-up page-turner overspilling with creativity. It’s not a heavy mood piece, there’s no sobering reflection upon its completion. It’s just so damn entertaining that reading it is actually a joyful experience…the kind that is pretty fleeting these days in popular entertainment. Pound for pound you’re going to get infinitely more mileage out of this brick of a book than you did out of whatever hack movie you saw last weekend.

Patrick Godfrey generally prefers Elliott Smith’s break-thru effort “Either/Or”, but still has a soft spot in his heart for XO. Really, anything in the catalog will do nicely. If he really wants to get his mope on he might throw on some Portishead, but these days that doesn’t really happen very often. Viva la romance!