Cloud Atlas: What goes around comes around (and around) Remember how we all emerged from the theater after seeing The Matrix, blinking into the sun and wondering what bad-assery had just befallen us? 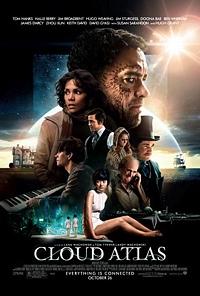 Neo’s adventures don’t stand the test of time well,1 but Andy and Lana Wachowski are back as part of a multi-director venture with Tom Tykwer (Run Lola Run) that demonstrates just what you can do with a sickening amount of money. Cloud Atlas, based on the book of the same name by David Mitchell, is six times bigger (and infinitely better) than The Matrix–in scope, in acting talent, in special effects, in costuming, in makeup, and certainly in levels of meaning. Unfortunately, many will be turned off by its seemingly impenetrable confusion.

Six stories interweave in a way we’ve never seen stories interweave before. They’re happening sort of in parallel, but sort of in a linear way, as they’re all spaced out through past, present, and future. Similar themes pop up in these six stories, which stretch from the bowels of a sailing ship in the 19th Century to a British nursing home in modern times to a futuristic yet primitive society that’s gone backwards as well as forwards. Almost all of the star-studded corps of actors in this film appear in each storyline, sometimes heavily disguised.2 And just when you think you’ve figured out what the overarching story is, you’re back to the drawing board.

Cloud Atlas is shifty is what I’m saying. The Wachowskis directed some of the six stories and Tykwer the others, but the tone and texture change between each. Hugo Weaving is always demonic and Hugh Grant is always a dick, OK, we’ve got that down, but what about Tom Hanks? His characters don’t often resemble each other. Is this about reincarnation? If so, why does Bae Doona’s completely crucial character of Somni-451, a sort of clone waitress in a futuristic Korea, not reemerge in the future or be foreshadowed in the past?

I spent Cloud Atlas staring stupidly at the screen as beautiful and terrible things happened all at once. The editing, surely one of this film’s hardest jobs, worked hard to build up tension as we ricochet back and forth between the centuries. I was transfixed and, at the same time, bewildered. I left the theater feeling much like ol’ Neo himself must have felt when, what was it, TWENTY BAJILLION YEARS OF CULTURAL HISTORY was downloaded into his head. I also felt hungry. The movie is three effing hours long.

A couple of days later, I’m still peeling back the layers. Cloud Atlas doesn’t tie everything up for you neatly at the end. You’ve got to let it unfold in your brain until all you want to do is talk to someone about the other connection you just made between the composer and the publisher and how you just realized that the song was playing during that one scene.

It’s not for the faint of heart, this movie. The Neo-mind-download you’re given is at times overwhelming and at other times annoyingly simplistic. But love it or hate it, I can guarantee you’ve never seen anything like it before.

Tom Hanks is good at his job.

You’re too busy reading the book.