The glaring red eye of the laser stares into the face of the wood below it. After a series of swift commands, the beam races back and forth across a table and swiftly cuts into the maple wood below. The exhaust from the machine is evacuated, the red light shuts off, and a piece of round, cool wood is left, now wearing a small etched face with a single finger over its lips, as if saying “Shhh.”

Jason Lefton, owner of the laser-etching company Big Secret, found himself overcome by his fascination for lasers in 2009. Originally a web-designer, Lefton’s love of lasers began after he watched a laser engrave his laptop. His creative wheels immediately began to turn.

“As soon as I saw the laser run I got really excited about the possibilities of a creative collaboration with somebody who might not be thinking about using a tool like a laser for any type of creative project,” Lefton said. After eight months of saving and research, Lefton had enough to buy his very own laser and went to work on his next big creative career, combining the science of a laser cutter with the creativity of art and design.

With a bed that can hold objects up to to 14 inches deep and 39 inches wide, the laser Lefton now uses is four times more powerful than the first one he bought in 2010 and can hold everything from wooden blocks to whole doors. When in action, the laser travels side-to-side across the bed as fast as 160 inches per second, using varying levels of speed and power to either etch a design or cut through whole material. The system uses a combination of computer software and color mapping to tell the laser how to etch the design or cut through the material. Some pieces are completed in a matter of minutes, others take much longer.

Instead of run-of-the-mill plaques and trophies for softball leagues, Big Secret chooses only projects that challenge and intrigue them. The company has worked on everything from personal business cards to Oreo cookie shaped book covers for the Martin Agency. Big Secret will even supply laser-etched mason jars to RVA Hackathon participants this month. 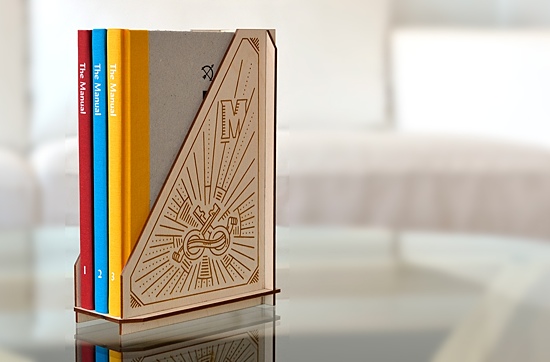 Part of the challenge of keeping Big Secret focused on their creative mission, to “use lasers to make art, toys, and lots of other fun stuff” using a wide variety of materials, is staying focused on the creative collaborations they want to take on and not falling back on too many bread and butter projects, Lefton said. “We have a unique business…one of the challenges is staying true to our statement. I want to stay small enough to stay true to that statement as often as possible.”

But getting people excited about the laser is one of the easiest parts of the job, Lefton says. “Once I show people what we do and how it works, there’s an instant connection, they get excited…just as I got excited when I saw my first laser run on my laptop, everybody else easily makes that connection, ‘Oh man this is something really unique and this is something that’s really exciting.'”

Big Secret’s first employee Kelsey Ibarrientos found her love of lasers during her graphic design studies at VCU. After graduation, Ibarrientos looked for a local firm to work with that would give her the opportunity to explore new interests and joined Big Secret first as an intern in July 2012 then later as the first employee last February. Ibarrientos acts as designer, producer, salesperson, and office manager.

“I like people coming to me with a need and … giving them something that is visually appealing and has a function, which is why I love it here so much,” Ibarrientos said. “Here I can make products, I can actually hold what i’m making, and all of the work we do is awesome.”

What’s next for the company? Making their own original products, Lefton says. The business is now 100 percent service based but is making plans to start building their own products for customers–including houseware, furniture, and art projects “all initiated by us, designed by us and manufactured by us,” Lefton said. “We have that talent here in house, and we have the ability so it seems logical for us to start producing our own goods.”

But more details on this upcoming undertaking will remain a secret for now.