Recently, bassist Jason Ajemian and his group High Life released a new record on Jason’s Sundmagi label called “Riding the Light into the Bird’s Eye.” I’m always interested in a band’s approach to composition and improvising, and thought it’d be cool to give everyone a peek into the truly unique approach that Ajemian has taken […]

Recently, bassist Jason Ajemian and his group High Life released a new record on Jason’s Sundmagi label called “Riding the Light into the Bird’s Eye.” I’m always interested in a band’s approach to composition and improvising, and thought it’d be cool to give everyone a peek into the truly unique approach that Ajemian has taken with the High Life.

Jason uses AUTOCAD, a program traditionally employed by architects, to create graphic notation that the musicians follow as if they were walking through a house. By combining traditional notation with symbols, cues, and written instruction, Ajemian has literally become a sound architect, building groove mansions that the band “walk through” during any given concert. 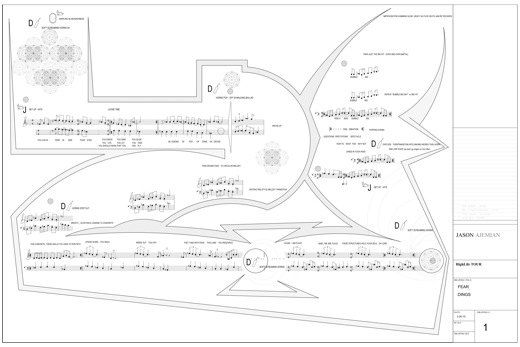 It seems daunting, but when you actually study the score and follow along with the music, the idea becomes much more clear, and the genius and humor of the process is revealed. As an example, let’s look at the first of three scores the band perform on the new record, called “Fear Dings.” The entire album is one long performance, and this score contains what would become tracks 2 and 3, “Bliss is This” and “Spectacle” respectively.

You can follow along by starting at the upper left-hand corner of the chart, and traveling down the page and then to the right and up…you’ll know it’s time to turn the page when you hear this sound…(jk).

The wine bottle is popped and the song starts with some “swirling Ab wonderness” until Jason brings in more structure with the line, “You live in fear inside your eyes,” at which point the rhythm section hold down a steady quarter note pulse while the horns play around the theme. You can follow the bass and melody lines until the band breaks into free time after Jason sings “Un Decide.” The words “Archs Up” signal Ajemian’s rising arco bass line, and the band quickly “walk” left and down the score, playing each of the short written themes in free time while improvising flourishes through out. They arrive at “Breath Slow Walk Leading to Concrete” and Jason brings the band back into time as he sings “This Concrete” etc. The horns flowing freely adding backgrounds and improvising around the key of A flat. After Ajemian sings a repeated chorus of, “Your Soul Oh Lord,” he and drummer Marc Riordan create a seamless transition into the tight groove of the next track “Spectacle.” 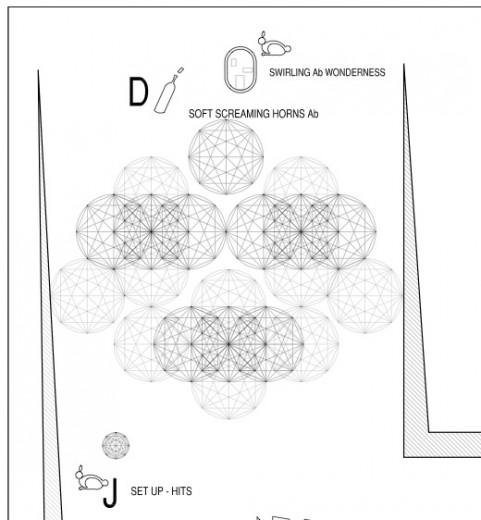 “Spectacle” finds the rhythm section holding down a solid groove with Owen Stewart-Robertson interjecting some funk scratch on guitar, while Peter Hanson on sax and Jacob Wick on trumpet improvise shouts and atonal lines. The lyrics start with, “Dings in your Head” and move up. Jason and the band follow the singing cues until they end with a big hit as Jason sings “Bubble Big Sky.” and then they improvise out and onto the next gigantic AUTOCAD chart.

What makes this approach so intriguing, is that it truly does accurately depict the flow of the music in a more organic and creative way, and the music still works just as well in a live setting. No one in the audience has to follow these charts to get the full feeling and emotion being translated. And you don’t need the charts to help you dance either.

With “Riding the Light into the Bird’s Eye” Jason Ajemian and the High Life have taken Jason’s compositional approach to another level, and created a set of truly exciting and unpredictable jazz and funk for maximum thought and movement. I recommend everyone pick this album up as soon as possible. This is rare indeed, some great new original music.