Art 180’s new production—written and performed (for free!) by area teenagers will get you feeling a full range of emotions. They hope you’ll act on them. You may have seen them at your local coffee shop, your favorite grocery store, or anywhere else you’re skipping along, going about your day with nary a care in the world. 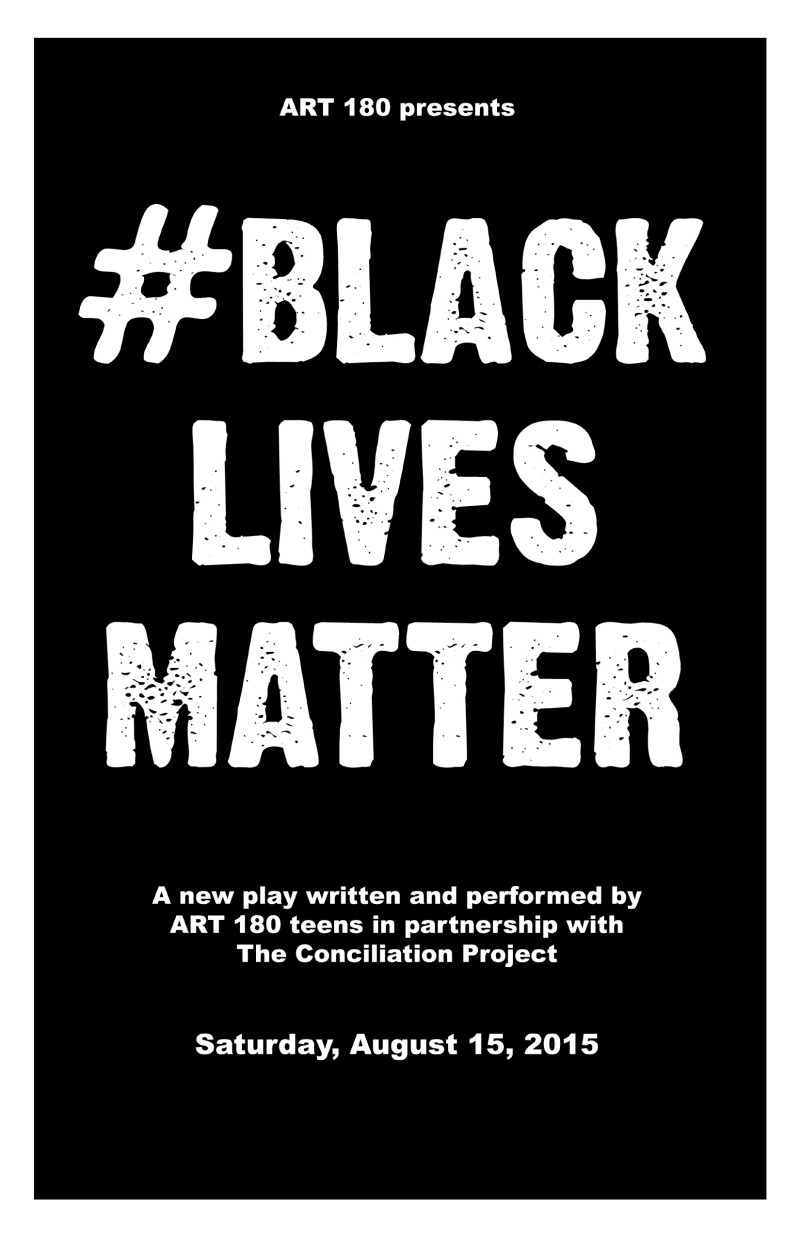 Black flyers, emblazoned with a simple white “#blacklivesmatter,” with a time, a date, and a place below it–they’re a reminder that we have lots of work to do. And some Richmond teens are graciously going to put on a production that will galvanize those who already get it and inform those who don’t.

Art 180’s summer drama program attracted a number of kids interested in the world of theatre. They knew they’d be working with social justice theater company The Conciliation Project, who’d partnered with Art 180 before, but they didn’t know anything about the topic they’d be tackling.

I spoke with Jendayi Johnson, Solomon Dortch, and Antoine Ford–all 15 years old–along with Matthew Ballou, a VCU student who works with the Conciliation Project. Their play, #blacklivesmatter, was created out of their own experiences, each turned into a vignette and performed by their peers.

JENDAYI: We really didn’t know how it was going to go. When we came here [the first day, which was in June], we had to write on these notepads, and the answers we gave to the questions [asked by Matthew] became the script.

MATTHEW: We gave them open-ended prompts, a variety of them like ‘When I open the door, I saw…’ We took their writings, read through them, and pulled together the play. So it was written by them and just facilitated by us.

JENDAYI: I felt like it was a lot easier than everyone sitting down and writing different scenes…

ANTOINE: Yeah, it’s a lot of little stories that make one whole. 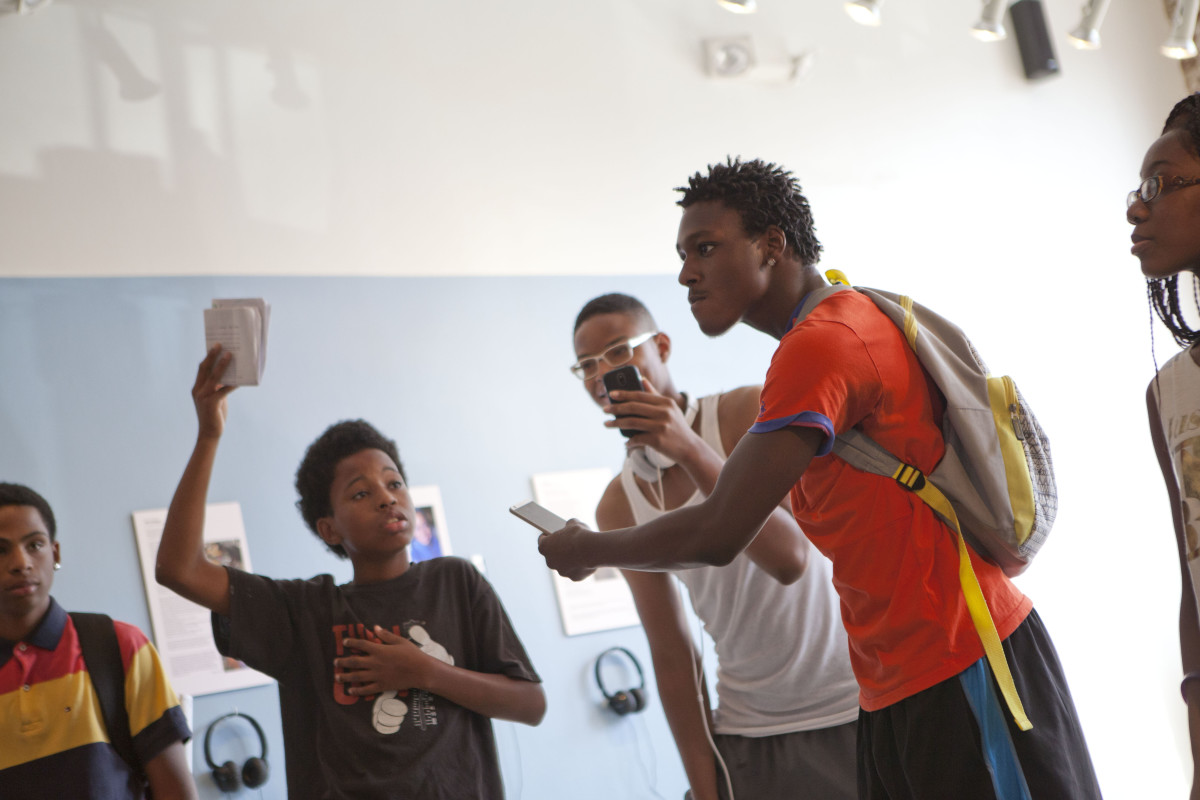 MATTHEW: That’s the traditional TCP style, which involves free writing and then cultivating the writings. The play is broken into what we call cycles, and in each cycle there’s a selection of scenes that bring to light different points and different ideas. There’s a lot of satire throughout.

JENDAYI: It’s not heavy. “Black lives matter” is something heavy. We’re teens and we’re making it light, but what we’re saying is serious.

MATTHEW: It uses humor to make it a little easier to discuss the heavier things.

I asked these kids–all of whom seem energetic, positive, and generally non-somber–what it was like to work on a project that you and your peers essentially wrote together and that talks about some pretty personal things. Is it hard to get up on stage and talk about things that are so weighty? They did some shrugging.

ANTOINE: This was a new challenge, this pushed me.

Jendayi is an old pro–she’s studying theater at Appomattox Regional Governor’s School, but Antoine and Solomon are newer to the stage. The program this year included 16 teenagers from the area, each of whom showed an interest in some aspect of drama. These kids are, essentially, here to act. They didn’t expect to learn about baring their souls via screenwriting as well. Was it hard to open up?

JENDAYI: We were doing our little reading thing and going through the script, and I thought “Oh my God, I wrote that!” But for the most part I’m basically an open book, if you sit down and have the time to talk to me.

ANTOINE: I was scared!

MATTHEW: It’s a TCP rule: if you wrote it, you don’t act it. They can stay anonymous, too. If I write something and Solomon speaks it, that’s a true story that came from this group, this family. The other purpose is to prevent things from getting too personal. We don’t want to bring it to a spot of pain, we want it to be healing and trasnformative.

SOLOMON: If I knew [what our responses to the prompts would have been used for], I would have thought it out a little bit more. But I didn’t get too personal, so…

It’s hard to imagine myself as a teenager being super aware of world events, much less world movements, but that was a different time without social media. A time when a # was just a #. But, also, I’m a white person from an upper-middle-class background, so while I’d like to think I was an aware teen who fought for social justice, I’m sure that can’t possibly have been the case. It’s arrogant to even think that as an actively interested adult, I even remotely understand what it’s like to be a person of color. How much had these kids (all of whom are black) delved into the movement and the debates surrounding it? 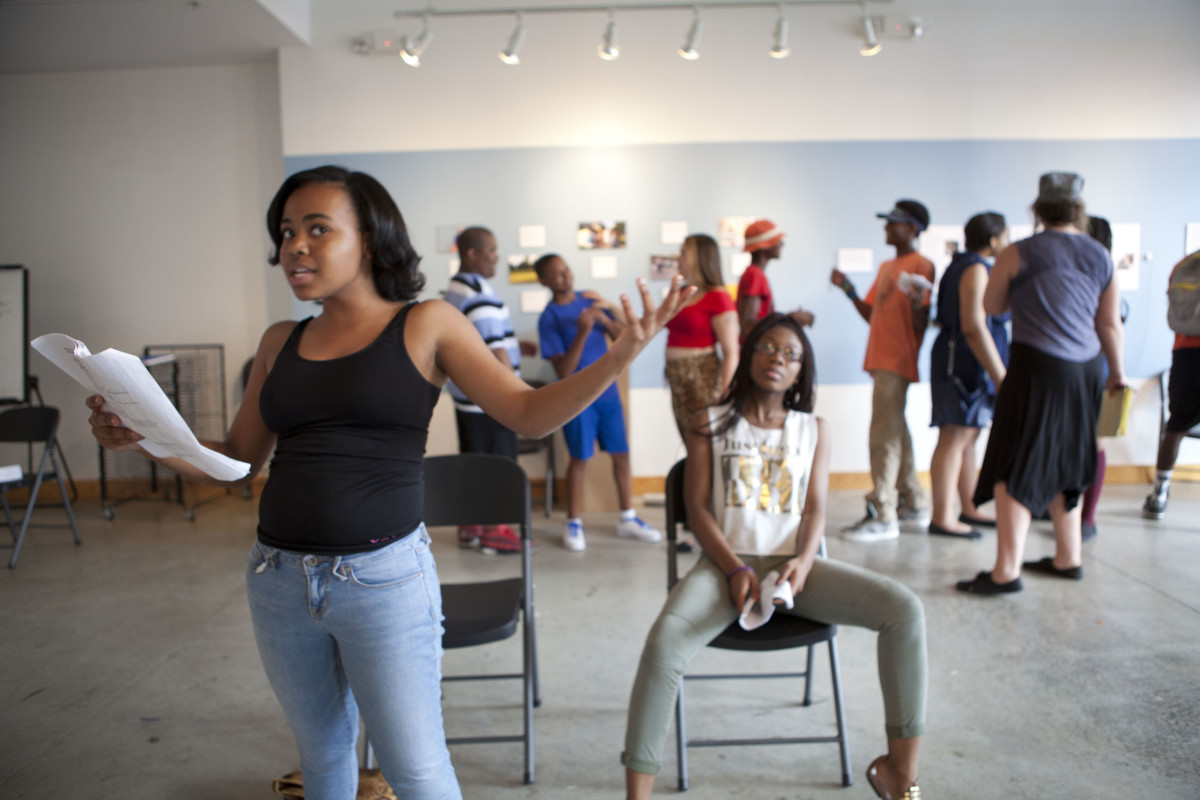 ANTOINE: I had no inkling what was going on, because I didnt want to know. I felt like I would have been dragged into an anger with the world. Now that I’ve learned more about how much racial profiling is going on now with police brutality, I take more caution with things I’ve been in trouble for in the past…

JENDAYI: Yeah because you’re black and a male, you gotta be careful!

ANTOINE: Hey, I don’t do a lot of things that I used to do!

She’s teasing him, but she means what she says. I ask whether or not they feel like things are getting better or worse.

JENDAYI: I’d thought about it, but had never come up with a plan to put a stop to it.

SOLOMON: Kinda like what Jendayi said. Was just thinking about it, but yeah, I want to do something.

ANTOINE: My grandma, she tells me how she used to live in the time when they’d march with Dr. King. I feel like back then, it was a lot worse than it is now.

MATTHEW: We sat down and met a few times once we knew who was goign to be facilitating it. And we thought “How we are going to start this conversation? That’s really what TCP’s goal is–everything that we do is to start conversations that have not happened and need to happen. We started the conversation with the teenagers by showing them Sandra Bland dashboard footage, news coverage of different events, and we started talking about what’s happening now, what happened yesterday or the day before, and what’s going to happen tomorrow. We took their writings and compared them with what’s happening, and we saw a lot of parallels between the stories.

ANTOINE: That was effective, I thought when you showed us that that I really wanted to do something with it.

JENDAYI: People started putting their opinions in, some of them hit home.

Is learning about one’s peers surprising? Of course it is.

JENDAYI: Somebody [in the program] has a story that their dad died when they were 10, and I was looking at the story like “Wow” because I don’t have a good relationship with my father, and there are some people who are really upset that they’ve lost a parent.

SOLOMON: And when I saw this person it didn’t seem like they’d had something like that happen to them.

ANTOINE: I didn’t know that everybody would be so emotionally involved in this program. We have people who are very enthralled. They want to help and benefit as much as they can, it’s just like, there are a lot of big personalities involved and when everybody has opposite sides…Once we get over the madness and being angry at each other, we come out to have awesome skits during that day.

JENDAYI: One day that started out being a bad day actually ended up being pretty good! 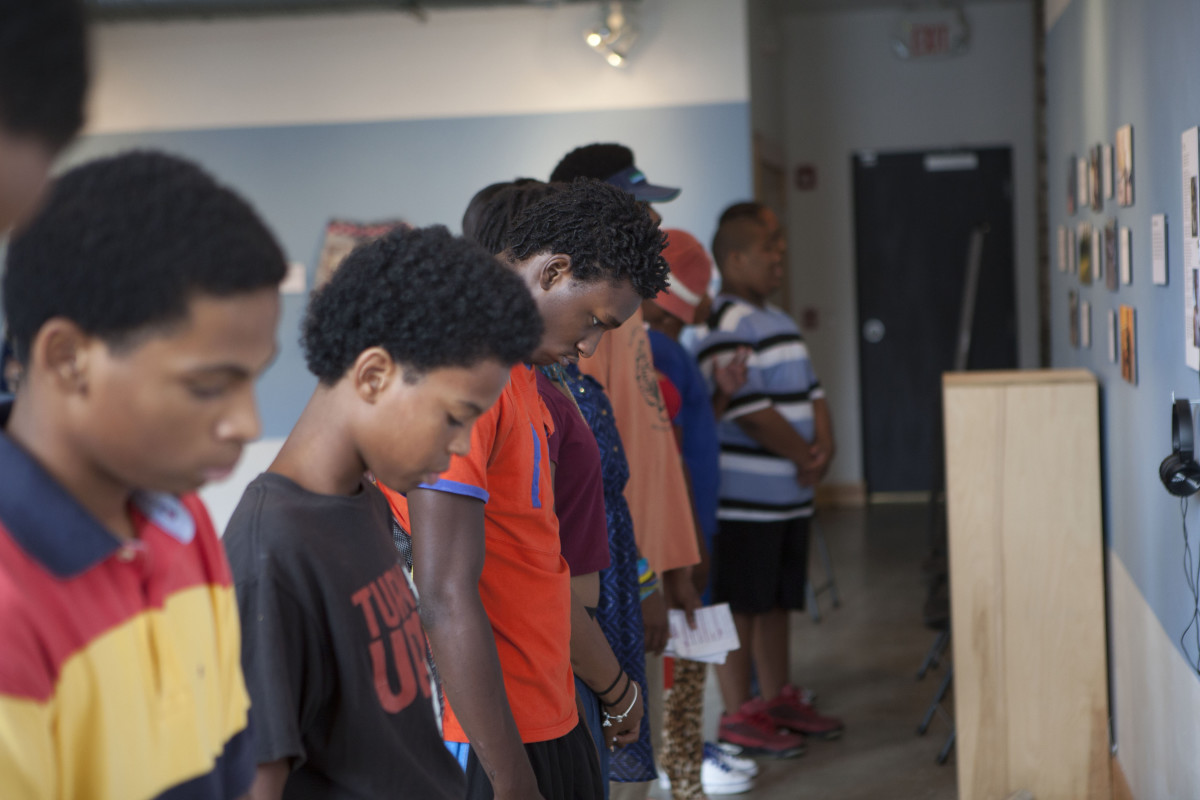 ANTOINE: The way the leadership is [with TCP], you get a lot of guidance. It’s not totally policing, you have your own choice. You can write what you want to write or you can make up a story. All is cooperative, nothing is left out.

Matthew is new to working with teens. The fact that, really, he was very recently a teenager himself helped him connect and relate. Obviously he’s done something right. The three teenagers are practically radiating energy and confidence, whereas Matthew is a bit more softspoken.

MATTHEW: At the same time that we’ve been trying to create something and teach a skill to a lot of the teenagers who haven’t done theater before, it’s been interesting to see them progress and grow as well as see them progressing and growing. A lot of people shared personal stories, and of course, you can never know what someone’s story is until they say it to you. I think that was the first challenge for me. When I sat down and read through some of the writings, I thought “Wow, they’ve been through a lot, but that means they have a lot to tell.” It was important to us to not shy away from those stories. I was really afraid of resistance, because sometimes with teenagers they can be really set in their ways, and not being so far removed from being a teenager, I was really expecting a lot of “I don’t want to do this,” but it didn’t happen like I was expecting it.

The Art 180 crew has the enviable problem of having too much interest in their performance. They’ve added a showing for this Saturday, August 15th. You can now see #BlackLivesMatter at 4:00 PM or 7:00 PM at Dogtown Dance Theatre, 109 W. 15th Street. Tickets are free, but please make a reservation online.