Beginners: The beginnings of something great.

I’m sure you’ll be relieved to know that both Ewan McGregor and the indie film have still got it goin’ on.

One thing that people always spit indignantly at film lovers (particularly critics) is, “Oh, you just want everything to be an art film!” Untrue, my people! Real film lovers respect every genre, they just want a movie to stand out within its niche. In fact, one of the strongest types of skepticism I feel is the kind that crops up when you’re walking into a theater to see an indie film, fully familiar with its quirky trailer, trying to ignore the sinking feeling you have that the director has fallen into the trap that is so alluring to filmmakers (or writers or musicians or chefs or what have you) of any genre: following a formula that has already been proven to be successful. 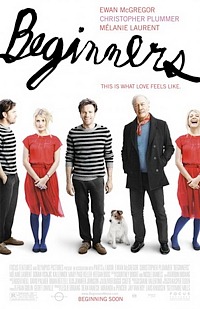 We’ll call it, just for ease of identification, the “Garden State Effect.” And for me, Mike Mills’s Beginners trailer sent up some red flags. Maybe it was the cute Jack Russell looking quizzically at a sighing Ewan McGregor and the hints that we’d have to suffer through yet another slog through a thirty-something’s failed relationship memories. Or maybe it was just the fact that I wasn’t wowed by his last hit, Thumbsucker.

I love when trailers don’t do a movie justice!

Beginners turns up its nose at self-pity. Oliver (McGregor), a 38-year-old artist who has just lost his father to cancer, feels lost in a whole lot of ways. He’s lonely, he misses both of his parents, and he wishes he could be more like his dad (played amazingly by Christopher Plummer), who came out of the closet at 75 and took life by the horns for his last remaining years. He meets Anna (Mélanie Laurent) at a costume party, and throughout the evening, they remove various parts of their disguises as they get to know each other better. It’s all very cute.

It’s both difficult and pleasant to figure out the conflict in this movie. Oliver’s present (that is, his growing relationship with Anna) is intercut with his memories of his father’s last years as well as a few of his own childhood. Throughout both of these timelines, I kept expecting some major blowups. Fights, tears, screaming, dramatic glimpses of a doomed couple and fatherly forgiveness.

But the best thing about Beginners is that everyone loves everyone else a whole frigging lot. Oliver’s dad not only calmly and believably intones that he loved Oliver’s mother very much, but he is also interested in exploring the side of himself that he never allowed himself to acknowledge during their 40-plus year marriage. Using his father’s energy, even as a sick man, and his realistic acceptance of his new boyfriend’s shortcomings as an example, Oliver becomes a beginner himself. Where his father was beginning to understand how to be a gay dude, Oliver is beginning to change his attitude about happiness.

Just thinking about it makes me a little misty. And not just because the film is so sweet and real, but because Mills managed to write and direct it in a way that feels fresh and hopeful, not just for other folks dealing with grief and fear…but for those with far less important worries about moviedom in general.

It’s going to sound crazy, but Beginners reminded me a lot of Bridesmaids. Both are great examples of excelling within a genre, and both, albeit in completely different ways, utterly reject wallowing in favor of accepting and enjoying life. Maybe this is 2011 giving pointed looks to some of the sad sack films of the Aughts, a thought made even more curious when you consider that the action of Beginners takes place in 2003.* I didn’t think it was a work of breathtaking genius, but if this type of film is headed in this type of genuine, graceful, and humorous** direction, I”m behind it 100%.

*Though they did have some missteps, in that neither McGregor or Laurent were particularly costumed in a 2003 way. I remember those days, as I’m sure you do too, and I think we can both agree that maybe they did us a service.

**Forgot to mention the talking dog, did I?