It’s an excellent way to spend a Saturday or Sunday. And, if you’re interested in agility training, you can bring your own dog (although he or she might leave with a complex). I’m going to say a sentence, and when you read this sentence, you will either a) sputter indignantly, b) roll your eyes heavenward, or c) put your hand over your heart, nod sagely, and close your eyes like you’re having a holy revelation.

Sometimes, I look at my dog, and wonder how on earth anything could be so dang beautiful.

There, I said it!

Scott Tomassi, who’s been involved with the VKC for a couple of years but has been interested in dog shows a whole lot longer than that, feels me. “I’m just fascinated by the bond between dogs and their humans. When you see the dogs at the shows, they’re just in such very good shape and are such beautiful creatures,” he says, when I ask him what drew him to showing dogs in the first place. “I’m very appreciative that we’ve been able to have these creatures in our lives.”

And maybe, if you are a dog person, it’s time to check out a real-life, legit dog show. “A lot of people who’ve never been to a dog show–or even some who have–do not have a full understanding of what they’re watching,” says Tomassi. He goes on to describe the format of the show, which will transform your experience from seeing dogs walk around in a ring to fully grokking the drama that is unfolding before you. 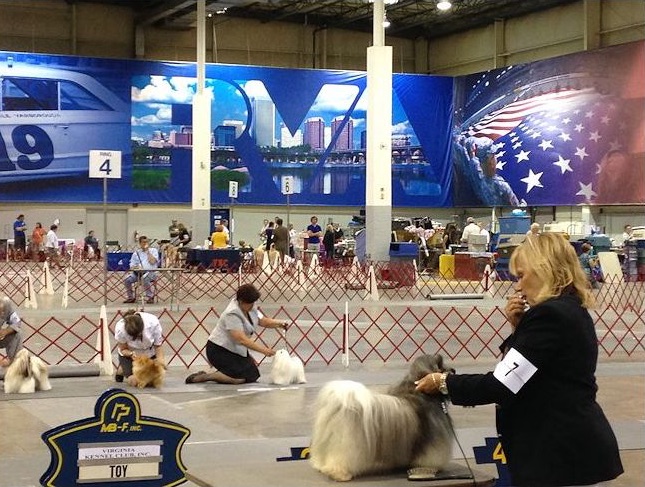 Basically, there are 180 officially recognized American Kennel Club breeds, which is the parent organization of the Virginia Kennel Club. If you have a purebred specimen of one of these breeds, if it is six months old or more, you may compete in a dog show. Your dog will be up against other members of its breed within a category probably based on age. Points are awarded for various adherence to breed standards–coloring, demeanor, size, structure, and other qualifying characteristics. If you earn more than 15 points and get a couple of major wins, your dog levels up to the champion level.

Yes, there’s a hierarchy! The amateur-type dogs are called “class dogs,” and a class dog, if it’s really swell, will get a chance to compete with champions in the Best of Breed judging later on in the show. The winners of those competitions compete in their particular group–like the working dogs, the hounds, the toy dogs, etc. And the winners of those compete for Best in Show.

Occasionally, a class dog trumps the champions and wins it all, which is when things really get exciting. Just like any sport. Except cuter.

Tomassi recommends that first timers stop by the Club Table upon entering, where some of his colleagues will be more than happy to point you in the right direction, say, if you have a particular breed you like (he’s partial to Havanese and French bulldog–“I just think they’re so comical!”)

At this show, you’ll also be able to cruise on through the grooming area, where you can talk to the dog owners and the handlers, which sounds intimidating, but he assures me they are thrilled to answer questions. “It’s always good etiquette to ask whether or not you can say hi to the show dog, though, because they might have just been groomed and getting ready to go into the ring,” Tomassi adds.

And a really special perk of this particular show, you can bring your own actual dog.

I’m into both the Manchester terrier and the dachshund, because my perfect dog is a specimen of both. Because she’s a mix (which, of course, sometimes become breeds in their own right), she’s not eligible to compete. I think she’s cool with that, though, because it would really cut into the time she’s set aside for barking in her sleep. 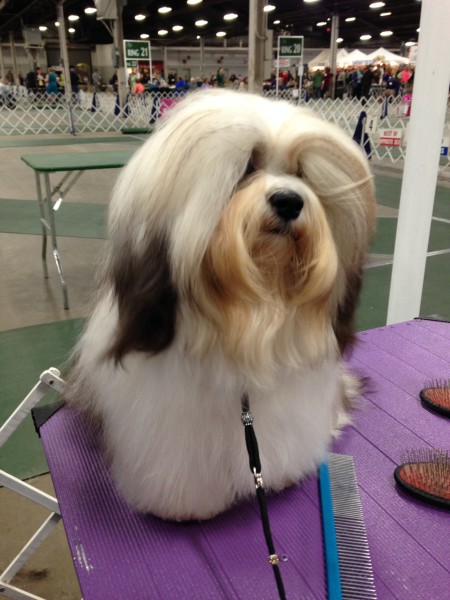 However, she has been told by several folks that she’d be a natural at agility training! If anyone’s given your pup similar praise (I’ll assume it is indeed praise!), you can come get an official evaluation at this very show! “My Dog Can Do That!” is a new program that connects you with agility evaluators, who will have some fun with your dog and let you know what they think! I have it on the best authority that dogs really enjoy agility stuff as a whole new world of athletic challenges.

The show will also feature vendors with dog-related products that “you won’t see at your local pet store,” says Tomassi.

The entire weekend–which really includes Monday and Tuesday, as the Gloucester Kennel Club takes over for their portion of the event–is a unique and very air-conditioned way to spend a summer day with your family.

“I don’t think anyone will go to a dog show and not smile at some point during it,” Tomassi exclaims. “You just can’t help but smile at a dog show.”