Beasts of the Southern Wild: Home is everything

In his first feature film, Beasts of the Southern Wild, director Benh Zeitlin has created a thing of beauty that’s unlike anything you’ve seen before When you see a lot of films, you get pretty tired of the same old thing. It’s why American Beauty blew everyone’s domes back in the Braveheart-era, it’s why The Dark Knight was the first superhero movie to be a real film, and it’s why The Artist took home a jillion awards earlier this year. The phrase “I liked it for what it was” gets tossed around a lot by apologists, but that’s never an excuse. Gonna make a comedy? Make a REALLY GOOD comedy. Gonna make an action film? Get a snappy script and wow us with some new twists. 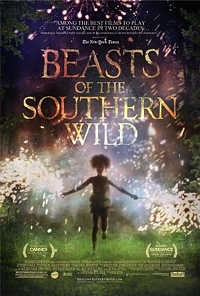 In his first feature film, Beasts of the Southern Wild, director Benh Zeitlin has created a thing of beauty that’s unlike anything you’ve seen before: the script, the narrative, the actors (literally, you haven’t seen them before–this is their first rodeo), the music, and, most of all, the imagery.

Six-year-old Hushpuppy lives with her father on The Bathtub, a swampy sometimes-island south of the New Orleans levee. She’s into her surroundings. Super into them. At first, we’re all “Oh no, it’s so dirty, what is that adorable little girl doing stomping around in her underwear, holding frogs and eating half-cooked chickens. Get out of there, adorable little girl! Go take a shower and get immunized!” And we’re not talking Winter’s Bone kind of messiness. We’re talking houses made of junk, boats made of pickup trucks and barrels, jars of muddy twigs serving as medicine…it’s intense. You can almost smell fresh earth and feel the humidity, so immersed are we in Hushpuppy’s world.

And she’s quick to assure us that she loves her world. The other folks in the community, cheerfully drunk and unabashedly unproductive, have holidays year-round. She hears stories about the mainland, but she can hardly believe they’re true. Why wouldn’t you go running around with sparklers every night and collapse into a dead sleep wherever you feel like collapsing? It’s the runaway’s dream life, only Hushpuppy and her father, Wink, are certain of one thing in life: The Bathtub isn’t a place for runaways. It’s home.

The outside world–that is, the world beyond the levee–is terrifyingly industrial and ugly. This isn’t some M. Night Shamyalan switcheroo. These Bathtub folk know about the “real world,” and their kids know too. And if it’s nature they’re all about, it’s nature that threatens to destroy them. I want to get into more detail, but I can’t. It’s too good, and finding out for yourself will be like wading into deep water and letting yourself just float into something wonderful.

There’s a Richmond connection here: the film was produced by native RVA’er Michael Gottwald. And if this film goes all the way to state1, as I think it will, we’ll hopefully see more of this filmmaking team. Keep an eye on the achingly adorable Quvenzhané Wallis, only five years old at the time of filming and a very real candidate for Best Actress. Her expressive face (sometimes expressive in its very inexpressiveness) is not purely the result of careful editing. She hits a home run in every shot, lifting animals up to her ear to listen to what they have to say, screaming into the night for her deadbeat mother, and staring down symbolic prehistoric beasts that may or may not actually exist. Dwight Henry, who plays her rangy spaz of a father, may similarly find himself plucked out of his preferred obscurity to win an award or two. They’d deserve the awards they get and probably more.

Because if you don’t, I will smack you.