Ain’t Them Bodies Saints: If not them bodies, then no bodies

True love waits–through prison, through Texas, and maybe even through mustaches. Director David Lowery, who you might know as one of the editors behind Upstream Color,1 one of my favorite movies of 2013 (so far), has moved into the director’s chair for Ain’t Them Bodies Saints, a westernish tale of love and consequences. 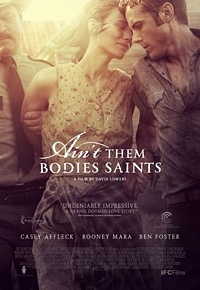 Bob Muldoon and Ruth Guthrie (Casey Affleck and Rooney Mara) are young outlaws in love (and pregnant) looking to “do” one last “score”–or however you put it in outlaw parlance. Unfortunately for them, and especially their partner who’s shot and killed, the last “score” turns “sour” and ends with them holed up in a shack while police use them for target practice. In the heat of the moment, Ruth fires back, wounding one of the police officers. Hoping to keep Ruth and their wee, unborn outlaw out of jail, Bob takes the blame for the shooting, and the pair surrender. In the film’s best scene, Bob and Ruth promise to wait for each other and are silently lead off to their respective fates, hands clasped, whispering final words to one another.

ATBS takes place in Texas during the 1930s or 1960s–and it really does feel like we’re in either/both of those decades or any of the ones in between. It’s disorienting in a neat way.2 A lot of what makes this film feel weirdly timeless is the beautiful cinematography. Almost the entire movie is shot in the golden, hazy setting-sun sunlight of Texas. Every shot is warm and fuzzy, or covered in evening shadows. This makes for some really beautiful scenes that reminded me of old polaroids from childhood vacations.

It also makes for some incredibly dark and distracting scenes, wherein I guess plot unfolds and actors act? We’ll never know. Cinematographer Bradford Young–who is acclaimed, guys–is surely doing these things on purpose, to evoke classic 1970s Westerns, to add some mystery to the characters, but, man, I couldn’t handle it. The night scenes, of which there are plenty, made me feel like I was watching a movie on my iPad in direct sunlight. Which is a total bummer as both Affleck and Mara do some wonderfully understated acting–if you could only see their faces!

ATBS is like a giant sun-dappled tangram: plenty of great parts and pieces, but they just don’t fit together very well. There are definitely things and themes and symbols floating around, but none of it ever feels really tied together.

You love beautiful old photographs of Texas and TexasPeople from the 1930s/1960s.

Ain’t Them Bodies Saints is a slow burner with an ultra quick finale that leaves plenty unsettled. The film sets such a slow pace to get you to look around and acknowledge just how beautiful everything is. If you’re looking for action and adventure on the high seas, look elsewhere!

No. But maybe it’s unfair to run a movie like this–that’s, at its core, about the relationship between a man and a woman–through the Bechdel Test.