Aida: The body count continues to rise, but they sing so purty!

Immensely popular 19th century Italian composer Giuseppe Verdi was known for paying particular attention to the drama of his opera parts, striking out parts that dragged, and emphasizing the dramatic wherever possible. We attended the Virginia Opera’s production of Aida this weekend to see if the drama of this tragic tale would bowl us the frick over.

Immensely popular 19th century Italian composer Giuseppe Verdi was known for paying particular attention to the drama of his opera parts, striking out parts that dragged, and emphasizing the dramatic wherever possible. We attended the Virginia Opera’s production of Aida this weekend to see if the drama of this tragic tale would bowl us the frick over.

You may remember from previous installments of Opera Quest (name subject to change upon whim) that we know virtually nothing about opera. Since we began our journey, we’ve learned a little about Wagner and Puccini, but Aida was our first Verdi voyage. Could he bring the heat?

In the excitement category, Aida was on par with The Valkyrie: epic battles (alluded to, not shown), gods, kings, etc. But it also included a lot of Madama Butterfly’s “anguished lover” stuff, so that we could connect on a more personal level. For this production, the Virginia Opera made a smooth move and filled up some of the instrumental parts that we sometimes find awkward with dance sequences performed by the prodigiously talented Richmond Ballet [1]. Since it’s neither the time nor the place (well, maybe the place) to demonstrate some of the RB’s more showstopping capabilities, it made sense that these sequences felt a little muted and underwhelming, but it still did a lot to improve the overall tempo.

Director Lillian Groag also staged The Valkyrie, which we saw last spring, and this production’s characters had a similar tendency of characters to stand around and let their voice do the emoting. We’d think “Thaaaaat’s opera! Voices do it all!” if we hadn’t seen the much more fluid Madama Butterfly (directed by Dorothy Danner) earlier this year. But Aida’s music was notably more beautiful and passionate for us, and that made all the difference.

And now, an annotated walkthrough for those on your own Opera Quest and a chance to check out Aida in the future.

ACT I and II

It’s Egypt!! No, for real! There are pyramids and everything[2]. Radames is just about to learn that he’s going to be the one who gets to lead the Egyptian army against the pesky Ethiopians. Yesssss! One thing he didn’t think about, though, is the conflict this presents for captured, enslaved Ethiopian princess, Aida, whom he happens to heart. To make matters more complicated, Aida’s the favored slave of Amneris, the pharaoh’s daughter, who has her own sights set on Radames.[3] Who will Aida root for — her lover or her father and brother, the heads of the Ethiopian army? WHAT WILL HAPPEN? You find out soon (remember how Verdi got rid of the more boring parts of the libretto so that it would be action action action all the time?): Egypt wins! Hooray! But…bummer! Hoobums! Amneris tricks Aida into admitting she and Radames have a thing going and decides that she can’t stand her. Meanwhile, Radames returns under showers of beautiful gold confetti and as his reward, asks if the Ethiopian prisoners can go free. They contain, you see, Aida’s father, who no one knows is the Ethiopian king. What a relief! But the pharaoh also awards Radames something else…his daughter’s hand in marriage! Oh noooo…..intermission!

It’s the eve of the wedding (told you, nobody’s waiting around in a Verdi opera), and Amneris is glowing with happiness and hopes to make Radames love her as much as she loves him.[4] But Aida has other plans! Or, rather, her father does. He finds out about their little love triangle and convinces Aida to get Radames to a) run away with her, leaving the Egyptian army without their heroic leader and b) reveal some key military plans. After an enormous guilt trip, she complies, and for some moronic reason, her father instantly reveals that he has been eavesdropping! Radames is horrified to learn of his own treason and gives himself willingly to the guards that Amneris, who has returned, calls in. Later, Amneris realizes her mistake. Now the dude she’s had her hopes set on will surely be given a death sentence. Too late, say the judges, it’s up to him to defend himself. Just as she feared, Radames is buried alive in a small tomb to die a sad lonely death. Only Aida has sneaked into the tomb herself so that they can die in each other’s arms[5] as a woeful Amneris grieves above and the goddess Phtha welcomes them into a golden heaven.

Now that we are getting a sense of the differences between composers, we’re starting to look with keen interest at different directing styles. Up next: Englebert Humperdinck’s Hansel and Gretel, directed by Kevin Newbury, playing in Richmond on Friday, November 25 and Sunday, November 27. We recommend getting tickets quickly, as they do tend to sell out. 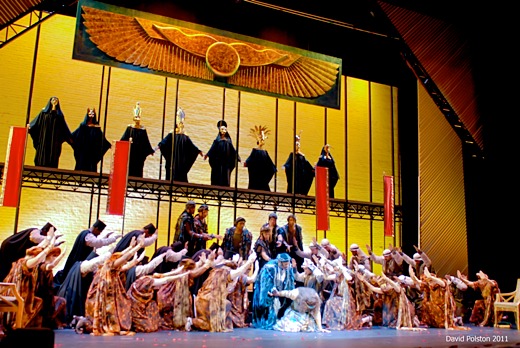 Turns out ballet folks look TERRIFYINGLY TINY when sharing a stage with regz people. « Back

Super cool set design created all sorts of triangles everywhere, but we were sitting just off the side aisle and had trouble with sightlines a couple of times. « Back

Mary Elizabeth Williams (Aida) and Jeniece Golbourne (Amneris) were the most magnetic opera singers we’ve seen yet. Both were touching in their grief and believable in their contrition, and their voices weren’t too bad either. JK they were awesome. « Back

She also floats down the Nile in a boat. We’re not sure if anything in Virginia has as cool sets as the opera. « Back

It’s a nice, clean death, suffocation and/or starvation (we’re not sure which one ultimately kills them, but it doesn’t seem to take more than a couple of minutes). « Back