Looking for tickets? You’re in luck, because we’ve got some tickets to give away for the screening of Abel Raises Cain. Enter to win here!

This Wednesday, as part of the Mid Atlantic Arts Foundation’s On Screen/In Person series, Jenny Abel will almost certainly delight every audience member at the Firehouse Theatre with her documentary, Abel Raises Cain. 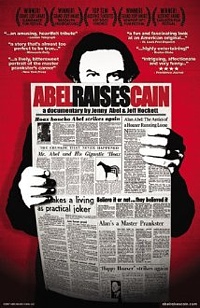 Jenny Abel’s ode to her parents, media prankster Alan Abel and his wife Jeanne, reveals a wry humor, unfailing optimism, and refreshing self-awareness in both the filmmaker and her subjects. Alan’s fascinating career and Jeanne’s cheerful camaraderie are spun into a story that Jenny narrates with a dry tone that sounds like her eyes are just on the verge of rolling. But they don’t–her appreciation for her parents’ devotion to the fine art of satire is genuine, and we’re left inspired in ways we didn’t expect. Why on earth do we take ourselves so seriously, and why bother doing something we hate in order to make money we don’t need? Most importantly, how are we shaping up as subject matter for our children’s future filmmaking endeavors! It’s time to do something interesting. Your kids will thank you for it.

We spoke with Jenny about her film and its whirlwind visit to Richmond. She was gracious and enthusiastic and (we’re pretty sure) filming the whole experience for use in an upcoming documentary about how great we are.

Why is Richmond so lucky as to get a screening of Abel Raises Cain?

Sometime last year, I submitted our film to the Mid Atlantic Arts Foundation’s On Screen In Person series for consideration. Luckily, they accepted us, and we received a grant to tour with the film. The funding comes from the National Endowment for the Arts. Mid Atlantic Arts Foundation had already chosen the host venues in advance, and Modlin Center for the Arts was one of the venues! They chose to work with Firehouse Theatre Project to get UR and VCU students involved.

[Jenny will be present at the screening to charm you all to pieces and answer any questions you might have. Such as “How does one charm everyone here to pieces?” – ed.]

Obviously your parents are fascinating individuals. What were their responses to the film?

You can say THAT again! I know there are other eccentric parents out there, but I’ve always felt like mine take the cake. My folks were really funny about the movie when I first excitedly showed them the rough cut. They didn’t crack a smile or make a sound. After it ended, they had about seven pages of notes for me to review! It’s very unusual for subjects of a film to be so involved with the finished product. It so happens that my husband and co-director, Jeff, and I didn’t pay any attention to their notes because we had already submitted the documentary to Slamdance that year. That was our first film festival and when we got in, my parents all of a sudden LOVED the movie. It took a neutral third party validation for them to realize that the doc was OK as it was and didn’t need any changes.

I think, in their defense, they have had such an interesting marriage and career together, and they know all of the subtleties and details surrounding major events in their lives, including the pranks. But it was impossible to fit everything into the story! Mostly, they wondered why many things were missing. Hopefully people watching the documentary and learning about the Abels for the first time won’t feel the same way.

[You won’t. The film is chock full of hilarious anecdotes. – ed.]

At what point in your life did you realize you wanted to pursue this kind of career? Did you always want to make a film about your parents?

When I was in college, I knew I wanted to make a film about my father and his unusual career. I started collecting video tapes from his archive and going over them and reviewing them. There were hundreds of hours of material! I would find myself laughing hysterically at some of the segments he did on TV. With conviction, I promised myself that the film about my dad’s life would happen. These gems were too priceless to keep hidden in a dusty attic, the world needed to know about Alan Abel.

I ended up moving to Los Angeles after college, and I put the documentary on a back burner. It was only after working in the film industry in LA for five years that I realized all I wanted to do was finish the project I had started. I felt like I had wasted so much time! It was around this period that my dad set me up on a blind date with my future husband, Jeff. (That’s a long story!) Jeff had an extensive news and reality TV background, and he found my dad’s work to be just as hilarious and worthy of a feature documentary as I did. And so together he and I worked tirelessly for two years to finish Abel Raises Cain.

Honestly, without Jeff, I don’t think I could have done it on my own. There was SO MUCH material to work with. We never really set out to be filmmakers per se. We just kind of jumped into it! And here we are, touring with the film, many years after we initially birthed it. It’s taken on a life of its own, mostly because my father’s story is so interesting. I guess in a way our movie has become a timeless classic, which I could not be happier about. What better way to preserve my dad’s legacy!

[Go see Abel Raises Cain Wednesday night at the Firehouse Theatre, and if you meet Jenny, just accept that you cannot steal her away to be your personal biographer.- ed.]