42: At least a base hit, maybe even a double

42 is a sports movie that will make you feel sports emotions–for better or worse. This past Thursday the Richmond Flying Squirrels hosted an early screening of 42, the Jackie Robinson story,1 at Movieland. This is exciting and a Big Deal: RVA was just one of three cities with minor league baseball teams to be chosen for this baseball-related honor. Couple that with last year’s screening of Lincoln, and DON’T LOOK NOW, but Richmond might slowly be turning into a movie town. Big ups to all the folks at the Squirrels and their MLB-affiliate, the San Francisco Giants, for making this happen.

Ray Boone, founder of the Richmond Free Press, was on hand to deliver some remarks before the film. Boone was nine-years-old when Branch Rickey and the Brooklyn Dodgers signed Jackie Robinson. He said that the news “raised a lot of hope” in his community, and that while we have many present-day challenges in Richmond, “we need a balance of history, and 42 helps us find that balance.” #wisdom. 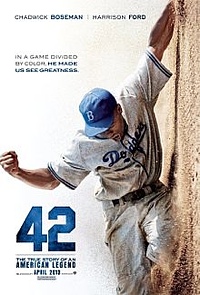 So it turns out that all of my Jackie Robinson knowledge was really knowledge about James Earl Jones in The Sandlot. This is embarrassing for several reasons, foremost of which is that it implies that I thought Robinson and The Great Bambino were contemporaries. I definitely spent the entire runtime of 42 waiting for Robinson’s career to end with a baseball to the noggin–which totally doesn’t happen!

But what does happen is a whole bunch of sports emotions. Personally, I hate emotions of all varieties and could do without them entirely, but dang if sports don’t melt my steely heart just the tiniest bit.2 Especially stories of redemption, unlikely allies, and triumph over odds–which is basically every good sports story, Jackie Robinson’s included.3 This is heavy and true stuff, y’all! And how do you avoid delivering a trite, emotionally manipulative script when just reading the Wikipedia is enough to make a man cry?

I dunno, and it took director/writer Brian Helgeland about half the movie to figure it out! 42’s early goings are rough and filled with sticky-sweet heroics and flat characters. Robinson (Chadwick Boseman) is a black man stolidly determined not to let a racially segregated sport (and country) get him down. Branch Rickey (Harrison Ford) is the manager of the Dodgers and determined to blow up some status quos while makin a ton of money winning championships. It’s all pretty black and white.

The moment Jackie nearly loses his cool after a confrontation with super racist and detestable Ben Chapman (Alan Tudyk), manager of the Phillies, is the moment Boseman starts to breathe some life into his character. Same goes for Ford: from then on out the two have some interesting and well-acted scenes–but it takes a while, guys. Especially for Ford, whose distracting impersonation of Branch Rickey may be accurate but requires some getting used to.

42 is definitely a sports movie. It chooses to flatten out and smooth over any rough spots that deviate from the core, inspiring (and mostly true!) message. This is a story about a legend, an American legend says the tagline, and with any story about a legend you’re probably only getting one side.

But it’s finally spring, the Flying Squirrels are back in action, and baseball is RVA’s pastime–at least until the Redskins head to their new training camp! So I’m not gonna complain (too much)!

You love baseball, and the thousands of baseball games each year simply aren’t enough to quell your red-hot baseball fervor. Or maybe you just freaking love sports, history, and seeing people do the right thing.

You’ve got plans with Wendy Peffercorn.